“The local media…were derelict in their duty because they portrayed these [antifa] groups as actual anti-fascists, rather than the organized street militia they actually are.” 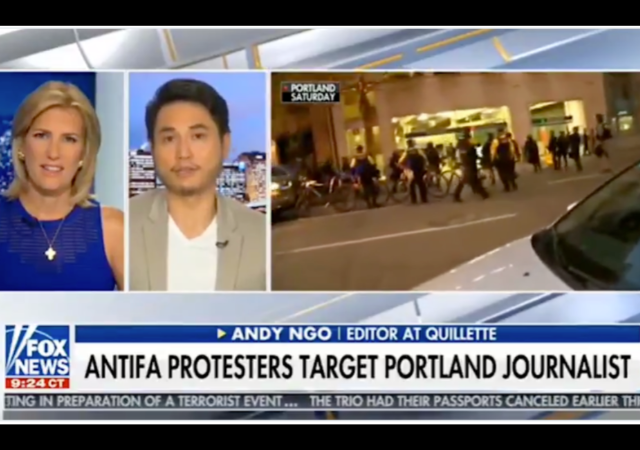 A group of conservative young women decided to stage a #HimToo rally in Portland, OR, as an effort to bring awareness of false accusations of assault against men. About 40 people attended.

The far-left group Antifa decided to hijack the peaceful rally after they deemed it unacceptable. Independent journalist Andy Ngo decided to attend, but Antifa thugs assaulted him by spitting on him and hitting him.

First off, here is the description of the #HimToo rally:

This is the mild event description for the Portland #HimToo event. In response, Portland’s far left has chosen to rage and claim this is an event for misogyny, racism, and fascism. pic.twitter.com/NsN7h2dfp6

Seems like a peaceful time, but as Ngo’s video and tweets show us, it was anything but that because Antifa decided to show up.

I was assaulted by a mob of masked individuals in black. They also targeted my equipment. They called me a fascist & Islamophobe. They said my parents & grandparents would be ashamed of me. It feels surreal to be treated this way by people who don’t even know me.

#Antifa mob started kicking and punching people who were walking away. I don’t know where the police were at this point. pic.twitter.com/UV4W8WynIw

Hannah McClintock, the woman in yellow with #antifa, repeatedly spit at a man & hurled punches at him. I had witnessed her trying to fight people over & over. She was one among six people who were arrested. pic.twitter.com/jWtX2wahw8

A large group of #antifa protesters encircled me. After I am pushed away, a masked woman sprays my camera equipment & myself w/wet silly string. They then play music & laugh. I want to file a harassment report with @PortlandPolice but the assailant’s identity is unknown. pic.twitter.com/U0EWZcw8lF

As soon as I entered Chapman Square in downtown Portland at approximately 1:40 pm, I was accosted & pushed around by masked agitators. pic.twitter.com/6uGf8VT0fa

“Your parents would be embarrassed by you–and your grandparents–who have been oppressed by white men throughout history. You should be ashamed of yourself.” pic.twitter.com/CRnq9U2vWI

“This city f—king hates you.” “Look at how pathetic you are.” “That’s an expensive camera equipment you got there.” “He’s a loser with no friends.” “He’s an Islamophobe.” “Nobody in this city likes you.” “You have no friends.” “Thank God you got all these cops around, huh?” pic.twitter.com/TRQdC9UlJO

WHERE ARE THE POLICE?!

Portland Police just looked on & then walked away after I asked for help. Intervening, I was told, would create a “flashpoint.” This policy is why protesters were able to commandeer the streets last month & attack an elderly driver. pic.twitter.com/JBWo0oFNjz

The Portland Police Bureau released a statement after the rally, which included arresting six people:

During today’s events, there were multiple assaults reported, as well as projectiles thrown at demonstrators and officers. Officers observed sticks, glass bottles, lit road flares, bottles filled with a substance believed to be urine, and gopher gas used as projectiles.

“The Portland Police Bureau spent considerable time planning for today’s demonstration and counter demonstration,” said Chief Danielle Outlaw. “We used significant resources and attempted to keep opposing groups apart, both when they were in the parks and as they traveled through downtown. Our goal was to keep all people in the community safe.”

All but one of the six received charges of interfering with a police officer. Authorities also charged Gary Fresquez, 52, with disorderly conduct in the second degree. They charged Hanna McClintock, 19, with harassment.

Ngo’s documentation caught the eye of conservative media and he spent the last few days bouncing from show to show to give a first hand account of the rally.

Ngo spoke to Laura Ingraham and not only bashed the media for its support of Antifa, but also Portland.

“Portland is a progressive monoculture,” I said on @IngrahamAngle. “The ‘Resistance’ is used as a rallying cry, & people actually think they are in a cosmic battle with so-called fascists.” #antifa (1/2) pic.twitter.com/aPE6LENgQ1

“Antifa has a lot of cheerleaders in the media. In broadcast, they have Don Lemon at CNN, here, they have the local left-wing press.” (2/2) of my appearance on @IngrahamAngle. pic.twitter.com/5fKXxHKHhb

Ngo appeared on The Hill‘s Rising show with Krystal Ball and Buck Sexton. He also told them the media has failed in their duty in reporting the truth about Antifa:

“The local media…were derelict in their duty because they portrayed these [antifa] groups as actual anti-fascists, rather than the organized street militia they actually are.” Link to my full interview with @krystalBall & @BuckSexton on @HillTVLive: https://t.co/RLjIiM1lNS pic.twitter.com/0NDtAKwCmp

Mary, they are not ‘far left’. They are closer to mainstream Democrat since that is who they are acting on behalf of. Allowing them the space of ‘far left’ gives too much separation between them and the rest of the party. We should not allow that. Make Dems own them.

That the police wouldn’t even intervene should be enough to tell you that Portland’s population doesn’t just include the fringe but is governed by them.

The lunatics who used to be ostracized and never had power are now the welcomed majority.

In places. Not elsewhere.

Antifa IS the heart of the Democrat Party, and you NEVER hear any Democrat criticizing or opposing them.

He doesn’t have to “own’ Antifa any more that I have to “own” the Proud Bois or the Alt-right.

There aren’t two tribes. To assert there are is pure bullshit.

“Street Militia”, heck no! A militia is akin to a posse, a jury or fire brigade. That is a group of citizens pressed into government service. A militia is group of people mustered into military duty. A group of angry people armed with weapons is called a mob.

“How does one interfere with a police officer who is doing NOTHING?”

By trying to make him do his job. PPD is a disgrace.

Six fascist thugs arrested on minor charges; slap on the wrist; nothing improves; repeat next week.

Ngo is a brave man, and an actual journalist. Salute.

The pattern I see with these fascist thugs, whether the Left coast Meth heads, or the East coast orcs, is low level terrorism up to a certain point, yet no further. This establishes their turf, generates publicity for their hashtag bullshtt, and checks anyone who dares to pushback.

It’s quite effective, really, and the POS mayor of Portland is enabling these fascists.

Yes, I think it’s all orchestrated. The ultimate goal of all this low level terrorism is to generate a violent response from one of their victims that results in a serious felony charge (ala Charlottesville).

The pro-fascist propagandists will then scream about violent white nationalist Trumpians who must be stopped by any means necessary – because Trump is ‘literally hitler.’

Nothing improves; repeat next week.

They have not received a vigorous enough push back yet. Perhaps they need a close encounter with crossbows. It would be neat to make arrow tips out of sodium (metal). Self cauterizing, and destroying any harmful bacteria 🙂

They’re not a militia. They are thugs with a party and a common cause.

What they ARE is anarchists. They don’t have a party. They are apolitical.

There are a good deal of Bernie supporters among them.

Antifa is political in the left-right nexus that serves a common cause.

Yeah, I mean, who you gonna believe, what they say about themselves or what someone trying to taqqiya for them says?

Yes. Primarily, they are anarchist, but even anarchists have a political identity. They believe you can’t kill the present democratic republic without violent revolution. To call them ‘apolitical’ ignores heir ultimate objective.

They may be “anarchists” in the way that word is traditionally used, but I believe it is a misnomer. They are agents of chaos. There’s a huge difference. An actual anarchist would be polite and respect the rights of others. A true anarchist understands that if he desires a condition of no government (anarchy), he cannot carry on like a criminal lest others organize to protect their rights (nascent government). A state of true anarchy cannot exist long where the rights of others are not respected.

If someone goes about assaulting others, blocking streets, destroying property, those people are just hooligans, thugs, and (because they are promoting a political agenda) terrorists.

I’ve been warning about the Black Bloc for over a decade. They are all about chaos and destruction. They are international, organized, mobile, and have resources and intelligence. They will co-opt any and everything that they can.