Branco Cartoon – Born To Be Wild

Branco Cartoon – Born To Be Wild

I gotta be me 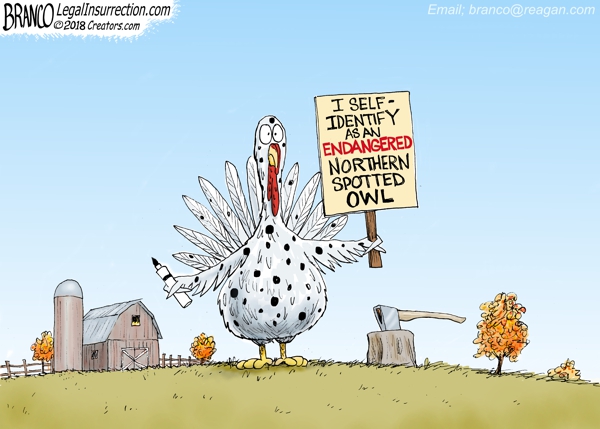 Happy Thanksgiving to all!

Thanks always to AFB and to LI

Great cartoon as usual Mr. Branco. Funny, clever, and a zinger to the nutters.

“Endangered” in red, because the whole thing was a giant hoax. Spotted owls were never endangered, and “northern spotted owls” are not a species, they’re just ordinary spotted owls that happen to live in the north, so they’re not endangered either; but this bird identifies not just as a spotted owl, not just as a northern one, but as an endangered one. Hey, who says one can only identify as things that actually exist? I think I’ll try identifying as a sasquatch for a while.

Identifying as a Northern Spotted Owl isn’t all it’s cracked up to be … some have been mistaken for their cousin the more aggressive and invasive Barred Owl and “removed”.

So is there a logger in the next frame thinking “You look more like a Barred Owl to me!?!” BOOM!