Authorities Identify Gunman Who Killed 12 at California Bar, Including a Sergeant

Authorities Identify Gunman Who Killed 12 at California Bar, Including a Sergeant

Bar was full of college students. 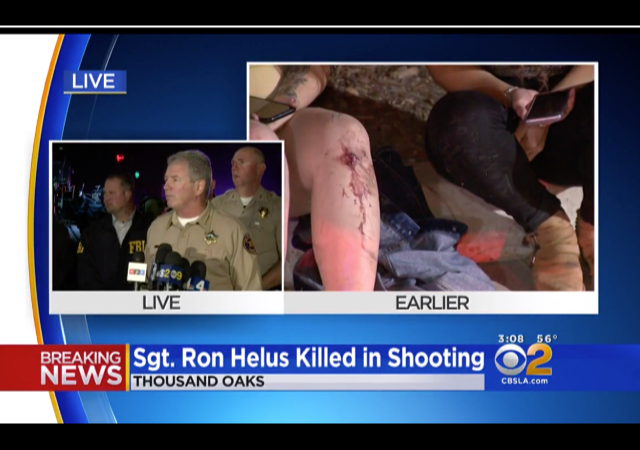 Late Thursday night, a man opened fire on the Borderline Bar & Grill in Thousand Oaks, CA, during a college event. He killed 12 people, including Sgt. Ron Helus, who rushed to the building when he heard the man still shooting inside the bar.

Reports have surfaced that authorities identified the shooter as former Marine Ian David Long, 29, and that neighbors said “he went by his middle name.”

Shortly before 7 a.m., deputies swarmed a neighborhood in the Newbury Park area, focusing on a particular home, which they roped off with crime tape.

Investigators were knocking on doors of surrounding residents to find out what they may know about Long.

One neighbor who knew Long said he was a veteran who suffered from PTSD. She said, “I don’t know what he was doing with a gun.” Others said Long lived at the home with his mother.

His gun, which appears to be a .45-caliber handgun, was purchased legally, according to ABC News. AP reports that he also deployed a smoke device.

Police found him with a self-inflicted gunshot to the head.

Ventura County Sheriff Geoff Dean explained to the press that they’ve had run-ins with Long:

Sheriff Geoff Dean, who is set to retire on Friday, said Long may have suffered from post-traumatic stress disorder and was known to law enforcement officials due to several unspecified “contacts” stretching back multiple years. Long served in the Marine Corps from August 2008 to March 2013, with a deployment in Afghanistan between November 2010 and June 2011, military records show.

“We’ve had several contacts with Mr. Long over the years, minor events such as a traffic collision. He was a victim of a battery in a bar in 2015,” Dean said, adding that the bar in 2015 was a different establishment than Borderline.

Dean said the last interaction between Long and authorities occurred in April, when police officers were called to Long’s house in Newbury Park, about five miles from Borderline, after reports of a disturbance. When they arrived, officers found Long “irate and acting irrationally,” leading to a crisis intervention team being summoned. The team, however, cleared Long and said they didn’t feel he was qualified to be taken into custody.

Witnesses said that at 11:20PM local time, the man dressed in black threw smoke grenades into the bar and opened fire as confused and scared patrons struggled to find a way out.

Officers arrived on the scene and heard the man shooting inside the bar.

Helus arrived first on the scene and did not hesitate to try to enter the bar in order to stop the gunman. The gunman hit Helus as soon as he walked into the building.

Helus spent 29 years on the force and was one year away from retirement. He leaves behind a wife, who he called right before he went inside, and a son.

“Ron was a hardworking, dedicated sheriff’s sergeant, he was totally committed. He gave his all. And tonight, as I told his wife, he died a hero because he went, he went in to save lives, to save other people’s lives,” declared Ventura County Sheriff Geoff Dean.

The gunman killed 11 other people inside the bar and authorities found him dead as well.

Thoughts and Prayers with the victims, and for a speedy recovery to the survivors.

That this man broke the law by murdering people, and had the temerity to do it while also violating California’s magazine capacity restrictions. The temerity of some people!

Suicide attacks are the hardest to defend against.

Most .45s are not “high capacity” and early reports are of a Glock 21 which has a 10 round mag (allowed in Ca law). His training is the deciding factor.

Years ago, on the Phil Donahue show, an expert was asked to discuss the recent New York City subway shooting. The expert was cut off as he mentioned that a 9mm wouldn’t be his choice, but a 45 would.

California spends more money on illegals than vets… I would guess.

notamemberofanyorganizedpolicital in reply to alaskabob. | November 8, 2018 at 2:52 pm

Reports say he used an extended mag. No matter. I am a pistolero by no means, but I can go from empty to back in battery with a semi-auto handgun in about 1.8 seconds. It’s just a matter of practice. Or a “New York reload” in which the shooter just goes from one gun to another. (So named after NYC detectives who eschewed reloading revolvers for simply switching to another gun.) Magazine capacity makes no real difference, which is not to say the antis won’t focus on it.

” His training is the deciding factor.”

When someone who’s actually trained* starts shooting (and I don’t mean ‘Has a passing familiarity with firearms’) liberals will absolutely shit themselves.

On the other hand, maybe some of them will rethink some of their actions.

So much sadness around this terrible event.

The killer in this case was apparently a young man who volunteered to serve us in uniform, and by all reports was a good, honorable Marine.

It may easily be that his nation let him down. He broke, somehow.

Now his own family and each of the victims and their families will have to live with this awful deed. This is the definition of tragedy.

Once again I can’t figure out the down votes.
Perhaps the down voters can identify which of Ragspierre’s remarks in this tweet of his is wrong, or offensive, or whatever?

notamemberofanyorganizedpolicital in reply to Rick. | November 8, 2018 at 3:22 pm

Lots of Ever-Rumpers and Dem Trolls read these sites.

Io not vote on posts, so I can not give a reason for the down checks. However, I find it interesting that Rags would jump to the possible conclusion that the NATION let this man down. This what liberal/Progressives, especially Democrats, do; blame society for the failure of the individual. It is kind of puzzling coming from a self avowed “conservative”.

That should read; “I do not vote on posts…”

Sorry for the typo. Mac

You can’t even read, huh?

I didn’t “jump to a conclusion”. You won’t HONESTLY find a conclusion in what I said, beyond this is a tragedy.

What I DID suggest is that there were perhaps failures here, which is something intelligent people who think DO. We look to make things better by THINKING.

Give it a try…

“It may easily be that his nation let him down.”

So, what led you to speculate that his NATION may have let him down? Short of indefinitely incarcerating this man, what should the NATION have done for him? Let’s be specific here. Please enlighten all of us as to what the NATION could have done to help this man. We’re all waiting.

First, let’s see you try to THINK of answers to your own questions.

You really are incapable of coming up with ANY arguments to support your blathering. Sorry about that.

I’m ready with my arguments.

Can you state yours?

No. I thought not.

With all due respect Mac, the first two links in the post indicate that Long was at least thought to have PTSD. No word yet on whether he was officially diagnosed or not. So there is at least some evidence that, if he had war-induced PTSD, it wasn’t being treated effectively (and I understand that some things can’t be treated effectively).

While I don’t know Ragspierre’s thinking, I took his comment to be that it could easily be that the shooter did not get his veteran related problems taken care of, which, I agree, would be our nation having let him down.

What veteran related problems, exactly? That he had some kind of mental or emotional problem is obvious, from previous contacts with LE. But, at this point we, including Rags, have NO information to say that his “problems” were service related or that the authorities, in this nation, failed to do all that they could for him.

He was a guy with possible mental health issues and he killed a bunch of people with a legally purchased handgun. Not unusual in history. We’re still trying to figure out why Stephan Paddock shot up a music concert in Vegas a year ago.

I am wondering if this perp is not what now is known as an ‘incel’ , “Person who is not in a relationship nor has had sex in a significant amount of time, despite numerous attempts.”. These intensely socially awkward, think play video games all childhood, have been responsible for 2 mass killings in the last month, 1 in Canada.

so he wanted to go out in a blaze of glory–grenades and a sidearm and a bunch of unarmed, innocent civilians

what a selfish coward

kudos to the sheriff’s deputy who ran to the gunfire–rest in peace, warrior

Perhaps we need PSAs to encourage potential murder-suicides to do themselves first?

Because, truly, after you do a Hemmingway with that .45 you won’t care about much about whatever’s bothering you anymore. So, why not just do yourself first?

The .45 may have been purchased legally, but it was most certainly POSSESSED ILLEGALLY.

Certainly what the Sheriff called an “extended (capacity) magazine”* was/is illegal under the gun control laws of CA, which are held up to the rest of the country as the answer to preventing this sort of crime.

I’m unaware of any reason that possession of the Glock 21 was illegal. IDK of any reported involuntary commitment for mental health issues, domestic violence misdemeanor conviction or felony conviction for the shooter. Did you have something else, or have I missed one of those reasons in Federal statute which remove a citizen’s Second Amendment right.

* Quite possibly the factory standard 13 round magazine, but it does exceed the 10 round limit in CA statute.

Just watched video on FNC of a mother emotionally (deservedly so) relating that her son had been present at Las Vegas and came home, but did not come home from the club. “I want gun control and I want it now!” She also stated that she doesn’t want any more prayers sent to her. S̶e̶e̶m̶s̶ ̶l̶i̶k̶e̶ I’ve heard that Socialist-Democrat talking point before this shooter’s murderous rampage.

Speaking of Socialist-Democrats, the Mayor of Thousand Oaks, in his press conference, stated that we should remember the victims and the Sheriff’s Sergeant and their families but reminded people that we should not forget that the shooter had a family too. A factual statement, but we know the intention implicit in the statement.

A bit late but there is an important detail that was reported but didn’t attract the attention it deserves. There were six off-duty officers in attendance.

But being unarmed, as CA law mandates for off-duty cops, they were rendered helpless just like everyone else. Cops are trained to respond to these situations and they were already in position… but they had no guns. They might have prevented all or most of the casualties.

Maybe the NRA should be making a big stink about this. It’s not enough pointing out that no gun control law would have prevented this. Eliminating ONE law might have saved many lives.

After a little research, I believe the article got it wrong. If I read the law right, cops can carry off-duty but have to follow the same CCW laws as civilians. It looks to me like maybe the cops left their guns locked in their cars rather than carrying them into a bar intending to have a few drinks. The bar may also have a no-gun policy. It would be interesting to find out for sure.