Suspect charged on dozens of state and federal counts, may face death penalty 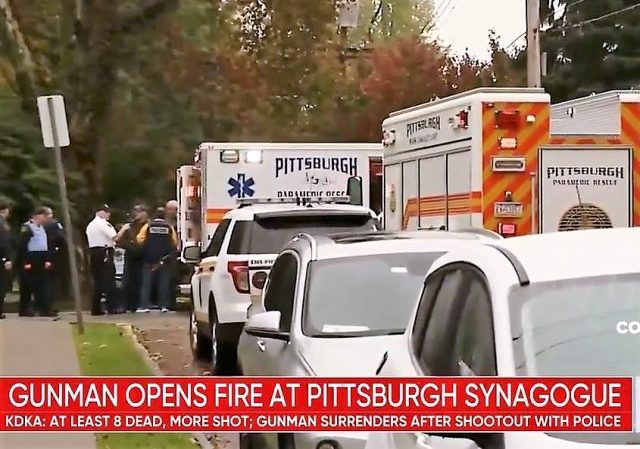 Yesterday, we covered the horrific mass shooting at the Tree of Life synagogue in Pittsburgh, PA.  We have learned new information, including the victims’ names and the state and federal charges filed against the shooter.

The shooter reportedly entered the synagogue and then opened fire while allegedly shouting, “All Jews must die.”  He slaughtered 11 people and wounded at least six others, four of whom are police officers responding to the scene.

The shooter targeted a congregation that is an anchor of Pittsburgh’s large and close-knit Jewish community, a massacre that authorities immediately labeled a hate crime as they investigated the suspect’s history of anti-Semitic online screeds.

A man with Bowers’s name had posted anti-Semitic statements on social media before the shooting, expressing anger at a nonprofit Jewish organization in the neighborhood that has helped refugees settle in the United States. In what appeared to be his last social media post, hours before the attack, the man wrote: “I can’t sit by and watch my people get slaughtered. Screw your optics, I’m going in.”

The FBI said Bowers was not previously known to law enforcement before he drove to the synagogue Saturday morning, as three different congregations celebrated the Jewish Sabbath in the building.

He allegedly walked through an unlocked door at about 9:45 a.m., armed with a Colt AR-15 rifle and three Glock .357 pistols — all four of which he fired, authorities said, as he moved around the large building, screaming about Jews.

E. Joseph Charny, 90, recalled praying on the second-floor of the building with about half a dozen other congregants. He heard a loud noise downstairs and soon saw a man appear in the doorway. Then gunshots.

“I looked up and there were all these dead bodies,” Charny said.

Bowers roamed the maze-like building, authorities said, gunning down groups of worshipers as he came across them.

Robert Jones, the FBI special agent in charge of the case, called it “the most horrific crime scene I’ve seen in 22 years with the Federal Bureau of Investigation.”

When police officers arrived, the shooter was exiting the synagogue and engaged in a brief exhange of fire before surrendering to police.

“He had finished, and he was exiting the building,” Jones told reporters. “Had Bowers made it out of that facility, there is a strong possibility that additional violence would have occurred.”

Instead, authorities say, Bowers exchanged gunfire with the two officers, shooting one in the hand; the other was injured by shrapnel.

He fled back inside the synagogue, and a small SWAT team assembled to pursue him and try to rescue the wounded inside.

Bowers shot two more officers — multiple times each — during a brief standoff on the building’s third floor, according to criminal complaints. He was allegedly yelling about Jews throughout.

The final casualty count was 11 people killed and six wounded, including the four officers.

The suspect was also shot several times before he surrendered inside the building. He remained in fair condition and in federal custody on Sunday.

Two of the wounded officers remained in stable condition in a hospital on Sunday morning. As they recovered, Jewish leaders and local, state and federal officials detailed what happened in the shooting’s aftermath, as well as what is still to come.

The names of the deceased victims have been released and include a husband and wife, two brothers, and many others.

A gunman who frequently posted anti-Semitic threats online burst inside a busy Pittsburgh synagogue on Saturday and opened fire, killing 11 people and injuring six others. After exchanging gunfire with police, 46-year-old Robert Bowers surrendered and was taken into custody.

. . . . Authorities have identified the 11 people killed in Saturday’s mass shooting. The ages of the victims ranged from 54 to 97.

Dozens of state and federal charges have been filed against the shooter.

After Robert Bowers was wounded in a gun battle with Pittsburgh SWAT officers and was receiving medical treatment, he said “he wanted all Jews to die and also that they (Jews ) were committing genocide to his people.”

Those details emerged early Sunday in an affidavit of probable cause charging Mr. Bowers, 46, of Baldwin Borough with 11 counts of homicide for the mass shooting earlier in the day at Tree of Life Congregation in Squirrel Hill.

In addition to the homicide counts, police also charged Mr. Bowers with six counts of attempted homicide for the six other people, including four police officers, who were wounded, six counts of aggravated assaults and 13 counts of ethnic intimidation.

Bowers was armed with a Colt AR-15, as well as three Glock .357 handguns when he entered the synagogue.

These details and others were released Sunday morning in a federal criminal complaint filed in U.S. District Court in the Western District of Pennsylvania by FBI Special Agent Brian Collins.

The DOJ has stated that its charges could lead to the death penalty should the shooter be convicted.

The Justice Department said it would file hate crime charges against suspect Robert Bowers and said the charges could lead to the death penalty.

“Today 11 innocent people were suddenly and viciously murdered during religious services,” said Attorney General Jeff Sessions in a statement Saturday. “These alleged crimes are reprehensible and utterly repugnant to the values of this nation.”

Sessions also thanked officers who confronted the gunman, including the four officers who were wounded. “These officers ran to danger to save others, which reflects the highest traditions of policing in this country,” he added. “There can be no doubt that they saved lives today.”

They did. And great restraint. Most criminals who wounded so many officers wouldn’t have walked out of that building breathing.

The PA Gov. has put a moratorium on the state death penalty. Does that mean prosecutors won’t even bother with pushing for it on the state charges?

I think they will still go for it in such a high profile, senseless hate crime, but even if they don’t, it sounds like the feds will.

The advantage of bringing federal charges is that all state court proceedings, including appeals which can last for decades, are bypassed in favor of a (relatively) quick trip though the federal system. That’s what happened to McVeigh in the Ok. City bombings.
This guy could easily be dead in 3-4 years, although it took a little longer for McVeigh.

FAKE NEWS TIP!: If you interview the current president for your fake news story and don’t get the answer you want, just find a former president that fits the narrative you are going for and put them at the top of your story

Anyone else bothered about the total failure of the media to understand that the universities have been driving anti-Semetic rhetoric and activities for quite sometime? The BDS movements? Open antipathy and often outright hostility by Dems toward Israel and open support of the PLO and Hamas? the longtime activities of J Street?

Sister, I’ve given up on how many things I’m bothered about.

2nd Ammendment Mother, Fuzzy, today is the day, isn’t it? Sorry, I hope we are all victors this day.

I couldn’t sleep. am so looking forward to today.