Vandals Shot Up a Republican Headquarters Office in Florida

Vandals Shot Up a Republican Headquarters Office in Florida

“It’s a small strip center and no other business was vandalized, so it was obviously politically motivated.” 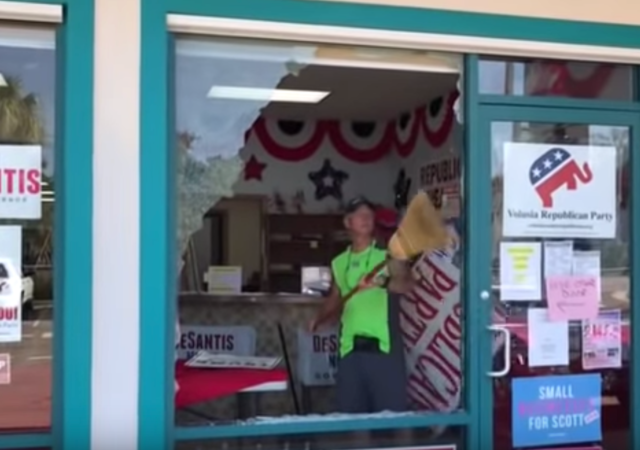 Can everyone CALM DOWN? Those who work and volunteer at the Volusia County’s Republican Party headquarters, located in Florida, discovered their office vandalized.

Vandals shot out the windows and people discovered four bullet holes inside the office.

From The Daytona Beach News-Journal:

Inside, volunteers pointed to bullet holes in the walls and ceiling.

“We have never had any kind of vandalism before at a Republican Headquarters,” Tony Ledbetter, the chairman of Volusia County’s Republican Party, said in an email Monday morning. “It’s a small strip center and no other business was vandalized, so it was obviously politically motivated.”

Ledbetter said he was the last to leave the GOP headquarters at 4 p.m. Sunday and workers in the adjacent businesses, including an e-cigarette store, a restaurant and a massage business, had closed by 10 p.m. No one heard shots fired and there were no injuries.

That means the incident took place after 4PM on Sunday. Police Captain Mark Cheatham said law enforcement has determined “at least four rounds were fired into the building” and they’re still tracking down video. They do not have any witnesses.

No one was hurt. At least 4 bullets went through the windows pic.twitter.com/34a6MEthJR

Jewel Dickson, the Volusia Democratic Party chair, said that the group finds the actions “appalling” and takes it as a “sign of things going wrong.” However, she said she “would not be quick to blame a Democrat for doing that” because “[I]t could be anybody angry.”

“The state of our political discourse in America is an embarrassment to all parties and those involved in the political process,” stated Florida state Rep. Tom Leek. “Neither Democrats nor Republicans own the high ground on this issue. Sooner or later, both parties are going to have to stop suffering idiots within their own party, and cast them out on their own.”

When one party openly and regularly declares the provisions of the Constitution as “illegitimate” when they lose, the social contract that prevents resort to political violence will fail. When social contracts are rejected by a critical percentage of the population [far below 50%] the normal currency of politics returns. That currency throughout human history has been brute force.

“Can everyone CALM DOWN?…”

Looters and Brownshirts don’t calm down: they wait for their chance to riot.

As a resident of Volusia and a member of the local Republican Party here this act of violence is disconcerting. Saying that, we will not be deterred from reaching out to voters. Democrats are scared here that their Blue Wave is gone. They know it and they are getting nastier and angrier. How sad.

g’day from another Volusia County Republican.

I don’t think this story will make it to NBC “News”. Mika, Chuck, Joe, Savannah and the gang will not be shedding any tears.

I had the same comment. Vandals are kids who egg houses or TP trees. Shooting out windows is not vandalism.

That Trump is so danged powerful, he can make Democrats break the law.

And the main stream media reaction is “Ho hum. A building got some glass broken. Carbon emissions are down! The plants are going to die! It’s Trump’s fault.”

Windows will soon start shooting back.

Too bad Sessions abdicated his duties while in office: he might have nipped this violence in the bud when the left started it.

The headline should be “Political terrorists” not vandals.

It should be pursued as a felony and they should get the max.

One shot could be construed as vandalism. Maybe.