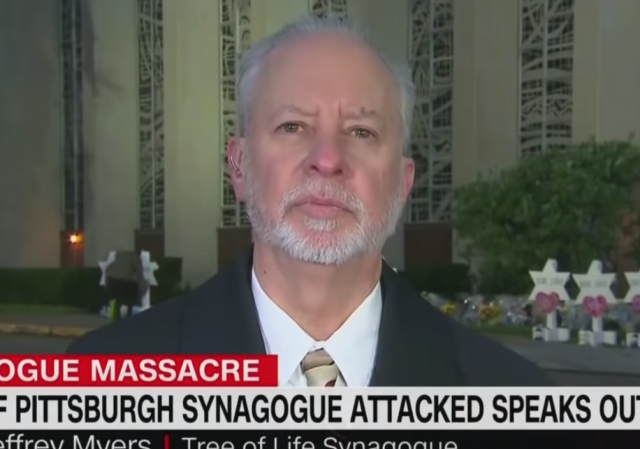 Eleven people are dead and the media is more interested in blaming Trump than the murderer.

Tree of Life Rabbi Jeffrey Myers joined CNN and refused to place blame for the tragic shooting on Trump or any one person in particular.

Tree of Life Rabbi Jeffrey Myers declined to blame anyone for the shooting at his synagogue despite hints from a CNN anchor that President Donald Trump is to blame.

During a Monday interview on CNN, anchor Alisyn Camerota asked Myers if he blames anyone “beyond the gunman” for Saturday’s shooting that claimed the lives of 11 congregants.

“What lights the match of hate?” Camerota pressed.

“I think you’re raising one of those great questions that people far smarter than I can answer,” Myers replied. “I do recall this: if we look in the Bible after the story of the flood and Noah, God regretfully says to Noah, ‘I have learned that man from his youth is prone to evil,’ which is, you would think, a horrific thing for God to tell us.”

Why that would be you CNN, you light the match.

Smart man. He’s not fanning the flames of hatred.

On the interviews I’ve seen, the interviewers were just *begging* him to name Trump, in any fashion, even with a slight dig.

Think of them as Democratic operatives with bylines.

Bear in mind that this is a “Progressive” rabbi, of a “Progressive” congregation. I’m sure he and all his congregants routinely vote a straight D ticket, and hold all the politically correct opinions (except that his congregants are mostly older people, and therefore probably more moderate than the crazy young people we’re seeing on the left today). Think “Mainline Protestant church” and you’ve got the picture. So for him to resist blaming Trump, and to insist that Trump was welcome to visit, deserves special credit.

OT
A full 6 hours AFTER a presser is announced for a woman who says she was sexually harassed and/or assaulted by Mueller, Mueller claims he reported a plot to falsely accuse him such.
Hmmmmm

Hate isn’t political yet we have a party in this Country that is pushing nothing but hatred while saying they are the party of compassion and love. And they are ever more anti-Semitic as well.

Dick Morris has an explanation for this.

I guess no one from Pittsburgh here. Don’t forget the ‘h’ in the title.

A lot of political posturing yesterday by the local politicians. I was embarrassed for them. Rabbi Jeffery Myers represents Pittsburgh, and I could not be more proud of my city when I heard his words.

This is what religious leaders are supposed to do, not pick sides based on politics. Faith is more important than politics. Faith needs to be steadfast and consistent, especially during the storms. That is what guides us past the chaos.

If we are going to prevail over globalized centralization, these are the “small” battles we must win. These are “small” battles that we CAN win and there are many of them in our lives. Winning thousands of these “small” battles as often as we can makes is the “herd of cats” barrier that keeps us free.

Refuse to surrender your freedoms. It is not negotiable. Hurrah for Rabbi Myers!

And so you see in Rabbi Myres responce a statesman. Well done.

Pittsburg is in California.