“slightly larger majority feared expressing themselves because of differences with classmates” 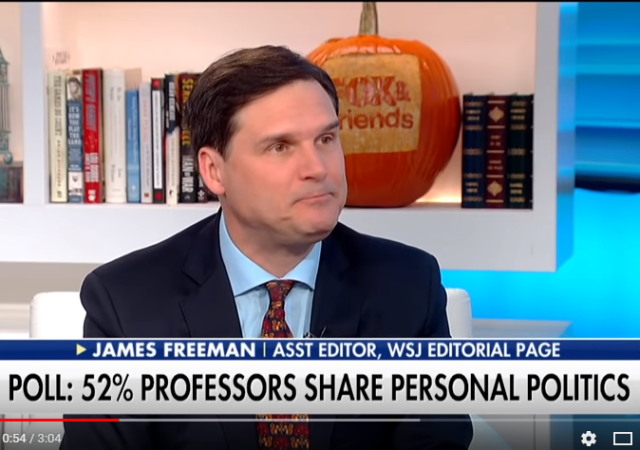 American college professors are becoming increasingly open about their politics in the classroom, even in unrelated subjects. A new survey has found that in response, students are much less comfortable sharing their views on politics, especially if they disagree. It also affects differences between students.

Most U.S. College Students Afraid to Disagree with Professors

Many U.S. college professors now regularly share their own social and political beliefs in class, and their students feel increasingly afraid to disagree. That’s according to a new national survey of undergraduates due out next week.

When students were asked if they’ve had “any professors or course instructors that have used class time to express their own social or political beliefs that are completely unrelated to the subject of the course,” 52% of respondents said that this occurs “often,” while 47% responded, “not often.”

A majority—53%—also reported that they often “felt intimidated” in sharing their ideas, opinions or beliefs in class because they were different from those of the professors. A slightly larger majority feared expressing themselves because of differences with classmates. On this question 54% said they often felt intimidated in expressing themselves when their views conflicted with those of their peers, compared to 44% who said they didn’t often feel this way.

As we’ve pointed out many times, free speech continues to be an issue on college campuses and this survey found some troubling things on that front:

As for the students, there’s at least a mixed message in the latest survey results. On the downside, the fact that so many students are afraid of disagreeing with their peers does not suggest a healthy intellectual atmosphere even outside the classroom. There’s more disappointing news in the answers to other survey questions. For example, 59% of respondents agreed with this statement:

My college or university should forbid people from speaking on campus who have a history of engaging in hate speech.

The survey also found that while a majority of students support the First Amendment, 17% backed rewriting it.

Freeman discussed this on FOX and Friends:

The amazing thing about this is that college is the one place most people agree should be the most free when it comes to speech. The whole point of higher education is to be exposed to new ideas, to be challenged and to have robust debate about ideas.

If we’re not doing that, what’s the point?

“If we’re not doing that, what’s the point?”

That is one huge yet unacknowledged reason college enrollments are down – and it could (and maybe should) kill the college ed business.

Go in with an open mind, come out with a closed, bigoted, warped mind…thinking you’ve been “educated” and “enlightened” when all you’ve been is indoctrinated.

notamemberofanyorganizedpolicital in reply to DINORightMarie. | October 30, 2018 at 9:22 am

When you can actually do home-schooling college, and get all sorts of credit for life experience (work experience, etc.)
it’s high time the leeches where cut off the public teat.

Besides, look at these articles.

Google, Apple and 12 other companies that no longer require employees to have a college degree

The big companies where you don’t need a degree to get a job
Google. Apple. IBM. No university? No praaablem.

Schools are decreasing their advertised costs after enrollment drops and consumer backlash.

“Google, Apple and 12 other companies that no longer require employees to have a college degree”

Sure, but they have other requirements like not being an old, white male. There is serious discrimination going on in tech hiring right now.

My oldest son in high school is off put by the political leanings of his teachers and students.

The realization that it will get worse if he goes to college caused him to state that he wants to go to trade school a la Mike Rowe’s suggestions.

He doesn’t want to put up with the white male privilege crap.

He doesn’t want to be force fed any more global warming crap.

He doesn’t want to deal with anymore LGBT melt downs or SJW nonsense that interferes with actual learning.

And he most certainly doesn’t want to be accused of rape for brushing by a student in the hallways ( where he suspects rape culture is going next ).

My son is in middle school and outside of Math and Science, sees a ridiculous level of bias from the teachers.

He modifies his schools essays to make sure they don’t say anything that will annoy the teacher, and knows what those topics are, even though he doesn’t believe what he is writing – because he will get harsher grading.

They are asked about how they “feel” about certain topics in history. They get taught about class warfare and Karl Marx and the proletariat.

He is in middle school and already is annoyed. In his words, “you can tell which ones are the crazy lesbian feminists” and how to handle them to get good grades.

A backlash is brewing for sure.

I saw the same thing from grad assistants in college 50 years ago. This has been going this way for a LONG time.

40 years ago, I repeatedly confronted my Civil Procedure professor over her blatantly “progressive” lectures and comments. We clashed on the very first day of law school, in my very first class.

Thank God, the grading of examinations was blind.

Yeah, my kids went to a “top” public high school and the main lesson that they learned is that vast (and increasing) areas of life are closed to inquiry: there is one correct opinion and you’d better agree with it if you know what’s good for you (“we will not tolerate intolerance” was how my son summarized one indoctrination session). The kids know that it is BS but pay the required lip service. As Theodore Dalrymple said of communist propaganda, the point is not to persuade or convince, not to inform, but to humiliate. They are being bred for servitude.

Sometimes it’s not so much being “afraid” to express one’s opinion as just weighing the upsides against the downsides and figuring, “why?”

After all, one is also free to speak (even encouraged, sometimes) at that mandatory diversity-training meeting, but, where’s the upside? As opposed to just keeping a low-profile someplace in the corner in the back until it’s over?

For if one were to take a hard look at this one might find entire academic fields in which the methodology overwhelmingly starts with conclusions and only later proceeds to look for evidence to support these (while ignoring, or even condemning, anything that might cast doubt on these pre-approved conclusions). But having done so, what then? If you know you lack the means to prevail on the battlefield then surely you’d be a fool to go to war.

Perhaps someday academia will just collapse as the USSR did, more with a whimper than a bang, and something better will arise from the ruins.

Or perhaps alternate systems of credentialing will render much of the present academic apparat irrelevant. Or maybe schools will even someday find it within themselves to clean house and rid themselves of departments that prove unable or unwilling to maintain some standards of scholarship.

But in the meantime it is what it is, and most of us will, other than engaging in some occasional ridicule and mirth, just keep our heads down until it gets better.

You can’t take a music class without some hysterical instructor screeching about his or her politics. An Economics class becomes a lesson in socialism, the antithesis of supply and demand studies. Science is about global warming and similar junk. I suspect there are astronomy and astrophysics classes that spend the entire semester downgrading Hubble and explaining how ancient Chinese and/or Muslims actually did much more.

Sadly, tenure was designed to protect the free speech and expression of professors, but has since been employed to take those very rights away from students (and conservative professors).

You will never see a conservative professor ranting like these leftist poseurs because they really cannot without some repercussions from their lefty colleagues or the administration. Chances are high that you won’t even know they are conservative.

My perspective on this issue is that of a repentant sinner.

What IS new is them feeling like they can aggressively insult, give bad grades, and try to humiliate any student that doesn’t agree.

I was homeschooled since midway through elementary school.

Looking back from adulthood, I’m pretty sure the final straw was when I came home asking questions about a ‘science’ book that claimed we were going to run out of fossil fuels for electricity by 1981.

This is one of the reasons I left higher ed. I got tired of sitting through meetings that were Republican bashing sessions rather than about teaching. I never divulged my politics to my students, even when I taught constitutional issues.

So the University is going the way of another left-wing institution: journalism.

Glenn Greenwald decries:
“this suffocating constraint on how reporters are permitted to express themselves produces a self-neutering form of journalism that becomes as ineffectual as it is boring.”

How boring.
Better to reinvent journalism (and academia while we’re at it)

“all journalism is a form of activism. Every journalistic choice necessarily embraces highly subjective assumptions — cultural, political or nationalistic — and serves the interests of one faction or another” (http://www.nytimes.com/2013/10/28/opinion/a-conversation-in-lieu-of-a-column.html?pagewanted=3&_r=5&pagewanted=all)

Who needs objectivity when you have the truth?

And who better to educate us on that truth than the University and the Media?

What a difference from my PolSci minor days where the professor made Leftist statements in order to stir argument. This was Oklahoma and he wasn’t a big Lefty, but he knew conservative statements would not be at all controversial. He depended on the vets in the class to rise to the challenge and start the arguments he used as a way to start discussion.