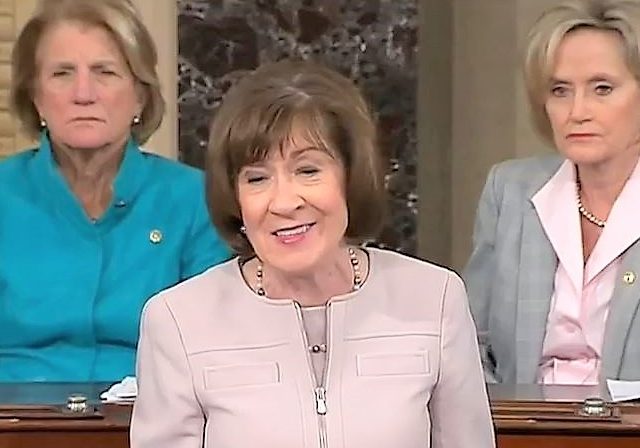 Before her Kavanaugh vote, the left was trying to buy Collins with promises of financial support, but now she has become a target.

Nearly 1,500 St. Lawrence University alumni and faculty are calling on the school to rescind an honorary degree Sen. Susan Collins was awarded last year because of her vote to confirm Supreme Court Justice Brett Kavanaugh.

A more moderate Republican, Collins was targeted by liberal activists and those opposed to Kavanaugh – particularly after allegations of sexual assault came to light – who thought she could abandon her party and vote against confirming the judge. But ahead of the vote, Collins said she didn’t believe the charges could “fairly prevent Judge Kavanaugh from serving on the Court.”

Kavanaugh, who vehemently denied the decades-old sexual misconduct claims against him, was confirmed in a narrow 50-48 vote despite testimony from accuser Christine Blasey Ford.

More than 1,300 alumni of St. Lawrence University in New York signed onto a letter saying Collins “lack[s] the integrity and commitment to justice that we expect from the St. Lawrence body.”

“We ask that the University revoke this honorary degree as we find that she is not deserving of it in the face of her recent actions. We ask the university to do this in support of truth and for all of the victims of sexual assault and violence, of which many of her fellow alumni and students have suffered,” the letter read, in part.

Rescind it all you want, St. Lawrence. You’re still in Canton, sukahs.

She ought send it back, with ketchup stains on it, and a dollar bill attached as a tip for their trivial place mat.