“But her long hair is just a western version Of hijab! I figure shave it if you’re really against hijab.” 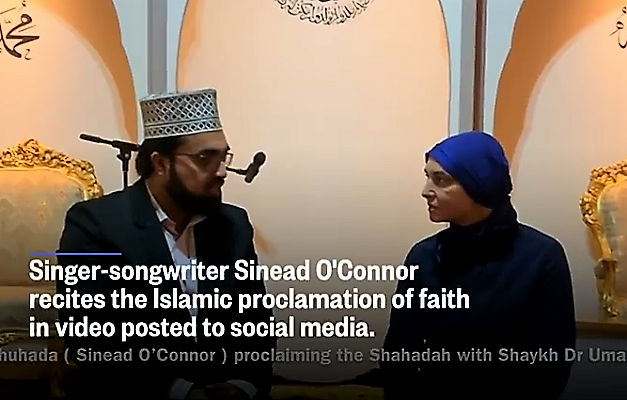 Remember Sinéad O’Connor, Irish songstress of “Nothing Compares 2U” fame and ripper-up of Pope photo on SNL?  She’s announced that she’s converted to Islam and taken the name Shuhada’ Davitt.  She released a video of herself singing the Muslim call to prayer.

Irish singer Sinéad O’Connor announced that she has converted to Islam and changed her name to “Shuhada,” saying her decision was “the natural conclusion of any intelligent theologian’s journey.”

O’Connor uploaded a video of herself singing the adhan, or Islamic call to prayer. She apologizes for mispronouncing some of the classical Arabic words. The Koran is written in Arabic, and its prayers are recited in Arabic, even if the believer is not fluent in the language.

The theologian at Islamic Centre Ireland in Dublin, Umar al-Qadri, released a short video clip of the Irish singer reciting the “Shahadah,” the profession of Islamic faith that begins, “There is no god but Allah, and Muhammad is the messenger of Allah.”

“She’s so happy,” the cleric wrote.

“Her coming to Islam has been a careful and informed decision and follows a lifetime of searching and study,” the imam said in a statement.

O’Connor told Oprah Winfrey in 2007 that she had tried to commit suicide at age 33 and was bipolar. She later said she had been misdiagnosed, but she has been outspoken in support of lifting the stigma over mental illness.

Qadri said O’Connor took the name “Shuhada” because “it refers to one who bears witness, as she hopes her life and her voice will always remain a witness to truth, justice and mercy.”

Today a long haired blonde lady with prejudice questioned me for 20 mins on why I wanna wear a hijab. But her long hair is just a western version Of hijab! I figure shave it if you’re really against hijab.

What Islam needs is to recognise it’s greatest weapon is the Azan. And it’s greatest weakness militarily, is that it doesn’t ask western singers to perform it our way. I am a soldier. I am helping you. Try to trust me.

OK, bit confused here. Exactly “how” is she lifting the stigma of mental illness? To me she is the half-baked 7-layer cookie of mental illness. You’d think some of the smarter muslims would say, “no, that’s OK, you can go back to the catholics, here, let us call you a cab.”

Only if “informed decision” you mean “believed the lies the Imam told her about Islam.” I still can’t figure out how they got Cat Stevens to convert, what he wrote in his music is 180 degrees from Islam. If you listen to some of his post-conversion statements he’s very much drunk the koolaid. He won’t condemn terrorism, for example. That moral judgement can only be made by an “Islamic scholar.” In effect he’s abandoned responsibility for making personal moral judgments.

“the natural conclusion of any intelligent theologian’s journey”

Yeah, if by “intelligent theologian” you mean “somebody who wants to dominate others,” since that is the prime directive of Islam.

Just when I thought I couldn’t care less about something, some leftist hasbeen wack job comes along and proves me wrong.

Does she, as a huge backer of murderous abortion, know that muslims don’t believe in abortions and think gays and lesbians should be put to death…

Yeah, I think she must since she underwent some sort of training or whatever to convert. I kind of feel bad for her, to be honest. She’s seems like such a lost soul.

She left Catholicism because it was “too much of a patriarchy”.

So, now she converts to Islam.

She’s at least 99 cents short of a dollar.

Used to be, people with serious mental disorders could get the help they needed. Now, they’re forced to fend for themselves.

Makes just as much sense as African-Americans converting to Islam because “Christianity is a slave religion”.

Sooo…..
You’re converting from a faith that bought slaves, but has since outlawed the practice,
To a faith that sold those slaves to them, and still practices slavery to this day.
Riiiiight…..