“Her appearance was criticized by portions of the student body, especially pro-Muslim groups” 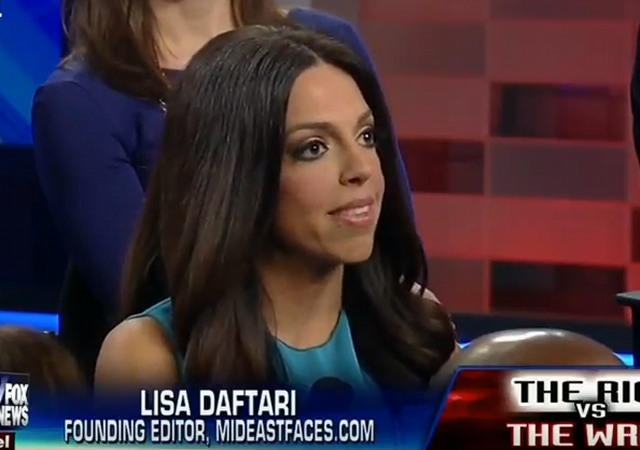 Lisa Daftari is a FOX News guest, writer, and speaker who focuses on anti-radicalism. She is an Iranian-born Jew and an alumna of Rutgers University, where she was scheduled to give a talk on October 16th. Some students objected for entirely predictable reasons and the school caved.

Aviv Khavich reports at The Centurion:

Daftari spoke to The Centurion late Thursday evening detailing the cancellation, calling the decision “unreal”. Rutgers University had previously appeared to stand by her appearance in the face of criticism by left wing groups on campus, stating in a Twitter post that “If these issues are not brought to the forefront and given a chance to be debated, then they may continue to stay buried”. It is unknown at this time for what reason the event was cancelled.

Daftari’s speech, ironically, was intended to be on the subject of “Radicalism on College Campus”, free speech, dialogue, and tolerance.

Her appearance was criticized by portions of the student body, especially pro-Muslim groups, who called Daftari “Islamophobic”. The Muslim Public Relations Council penned an opinion piece in the Daily Targum claiming that the foreign affairs analyst “threaten[ed] the safety of students”.

Additionally, an online petition was created on Change.org by Rutgers student Adeel Ahmed. At the time of writing, it had amassed 1,547 signatures. The petition contended that Daftari’s comments that “Islamic terror takes its guidance and teachings from the Quran, which is Sharia law”, were “Islamophobic”.

Daftari, a Rutgers alumna and Iranian Jew, was scheduled to give a speech on Oct. 16 titled “Radicalism on College Campuses” and discuss free speech at universities. Some students objected to Daftari’s speaking event; Adeel Ahmad, who studies Art & Science at Rutgers and is the president of the university’s RU Progressives organization, started a petition accusing her of being an “Islamophobe”:

In a [2015] speech at The Heritage Foundation, Daftari remarked “Islamic terror takes its guidance and teachings from the Quran, which is Sharia law.” She went on to say, “When you go to the mosque and you’re part of a community, and you want to feel important and relevant, and want to give back to the cause — [ISIS] recruits you. You say- I can be an ISIS wife.” This statement, equating Muslims everywhere with ISIS, is undoubtedly hate-mongering. This is only a small sample of the type of harmful rhetoric Daftari has advanced and shared on various media platforms.

At first, Rutgers tried to claim they were postponing the event, but Daftari addressed that issue on Twitter:

LET’S BE CLEAR- this was not a “postponement”- that is public relations talk for a cowardly CANCELLATION. @RutgersU told me the event was canceled.

So another university cancels a talk by a strong, independent thinker. Another nail in the coffin of the “marketplace of ideas.” https://t.co/bSYEYJzgyR

This type of situation always goes in only one direction. Left wing speakers routinely visit college campuses all over the country without incident.

Anyone who does not unconditionally buy Muslim BS claims, and their wet dream of superiority, will be attacked. In fact, Muslims use low level terrorism such as this just like they use suicide bombers.

Rutgers is notorious for keeping non-leftist speakers from speaking there. They called Condoleezza Rice a “war criminal” and got her to drop her speech there as well.
https://www.huffingtonpost.com/2014/03/17/condoleezza-rice-rutgers_n_4980826.html

Rutgers is a public school, but they are highly politicized anyway. Frankly, I would never consider teaching there or sending my children there. It’s part of what makes NJ the “nation’s armpit.”

Would Ms. Daftari and the cause be better served IF instead of offering a summation as quoted in the 2015 statement above, she instead cited case studies of individuals and how they came to be radicalized? Let the audience reach their own conclusions?

But I suspect campus protesters would find fault with that approach as well.

The entire fallacious conceit of “Islamophobia” has, regrettably, become one of the most successful propaganda terms of contemporary Leftist apologists for Islam and Islamic supremacists, inasmuch as it makes a natural fit with Leftists’ obsession with perpetuating a culture of contrived victimhood.

Legitimate criticism of Islam’s inherent supremacism, totalitarianism, anti-Semitism, misogyny, anti-gay hatred and general belligerence, does not represent a “phobia” of anything. The idea that this ideology should somehow be immune from any scintilla of criticism for the widespread belligerence, hatred and subversiveness evinced by a substantial portion of its adherents, is one that I reject on its face. Any Leftist who is advancing such a conceit is properly labeled a willing collaborator with totalitarianism.

The utterly contrived and fallacious notion of Muslims as alleged “victims,” when they are anything but, must be combated at every turn.

I always like to bring up the world’s largest holocaust, committed by Muslims in India between 1000A.D. until about 1800A.D. when the Brits shut down their operation (The Sikhs of the Punjab and the Hindu Maratha armies had mostly gotten the job done). Muslim generals used to compete with each other to see who could compile the highest mountain of Hindu heads. And I don’t assign any religious or ethnic significance to the term. Sikhs, Buddhists, Jains, they were all worthless Hindus to the Muslim invaders.

Will Durant argued in his 1935 book “The Story of Civilisation: Our Oriental Heritage” (page 459):

“The Mohammedan conquest of India is probably the bloodiest story in history. The Islamic historians and scholars have recorded with great glee and pride the slaughters of Hindus, forced conversions, abduction of Hindu women and children to slave markets and the destruction of temples carried out by the warriors of Islam during 800 AD to 1700 AD. Millions of Hindus were converted to Islam by sword during this period.”

“The massacres perpetuated by Muslims in India are unparalleled in history, bigger than the Holocaust of the Jews by the Nazis; or the massacre of the Armenians by the Turks; more extensive even than the slaughter of the South American native populations by the invading Spanish and Portuguese.”

Alaul-Din Khilji, an Afghan of Turkish origin and second ruler of the Khilji Dynasty in India 1295-1316 A.D. asked his spiritual adviser or Qazi what he must do with Hindus per Islamic law. The Qazi said:

“Hindus are like the mud; if silver is demanded from them, they must with the greatest humility offer gold. If a Mohammadan desires to spit into a Hindu’s mouth, the Hindu should open it wide for the purpose. God created the Hindus to be slaves of the Mohammadans. The Prophet hath ordained that, if the Hindus do not accept Islam, they should be imprisoned, tortured, finally put to death, and their property confiscated.”

Of course, it never hurts to have the 1066 Granada Massacre in you back pocket should you be dealing with someone so stupid as to bring up the mythical Andalusian Muslim-run medieval paradise. It’s all a lie, and unfortunately the lie was originally cooked up by Europeans. Specifically, Protestants. They couldn’t say enough bad things about the Catholics. Catholic Spain just had to have been the worst of everything, so naturally anything that replaced it had to be better. Even Muslims knew this was ludicrous. Ibn Khaldun, a scholar and a statesman (and a raving racist) writing in the fourteenth century wrote that the desert Arabs and the Berbers of North Africa didn’t have a culture that surpassed that of Visigothic Spain. They really didn’t have a culture to speak of. They were only interested in raping and enslaving Spanish women.

Islam hasn’t changed much, has it.

“Islamic terror takes its guidance and teachings from the Quran, which is Sharia law”

How is that a controversial statement?

The inmates are running the asylum.