Two people have already been assassinated after they voiced support for the woman. 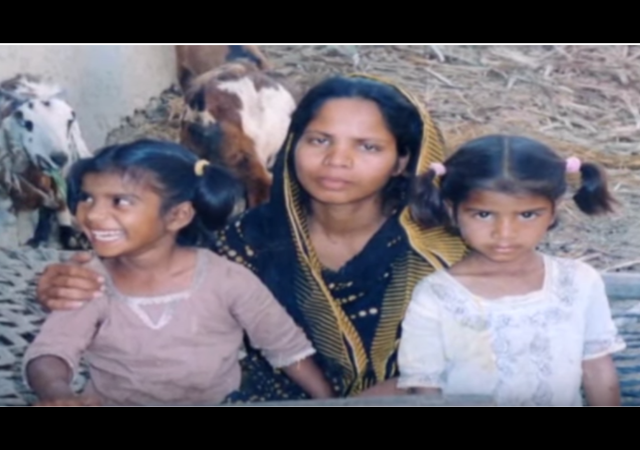 Pakistan’s top court acquitted and released Asia Bibi, a Christian woman, who faced the death penalty after receiving a conviction over blasphemy.

The Case Against Bibi

In 2009, Bibi fetched water for herself and others, but two of the “Muslim women refused to drink from a container used by a Christian.” Then “a mob accused her of insulting Islam’s Prophet Muhammed” a few days after the incident.

Authorities arrested and tried Bibi and sentenced her to death in 2010. Her trial sounds like something out of The Crucible:

Bibi’s family and her lawyer say she never insulted the prophet. In previous hearings her attorney, Saiful Malook, pointed to contradictions in testimony from witnesses. The two Muslim women who pressed charges against Bibi denied they quarreled with her, saying her outbursts against Islam were unprovoked.

Chaudhry Ghulam Mustafa, a lawyer for one of the plaintiffs, rejected the verdict, saying Bibi had confessed to making derogatory remarks against the prophet to seek pardon.

The three judges upheld the blasphemy law, but claimed the prosecutors did not “prove that Bibi violated the law.” The judges also said that “Bibi was ‘more sinned against than sinning.'”

The judges ended with this fine quote: “If our religion of Islam comes down heavily upon commission of blasphemy, then Islam is also very tough against those who level false allegations of a crime.”

The Catholic mother of five has remained hidden for her safety and people expect she will leave the country.

Pakistan’s Penal Code has several sections devoted to its blasphemy law. The military dictatorship of Gen. Muhammad Zia ul Haq established a blasphemy law in 1980 “making a derogatory remark against any Islamic personage” punishable with three years in prison. 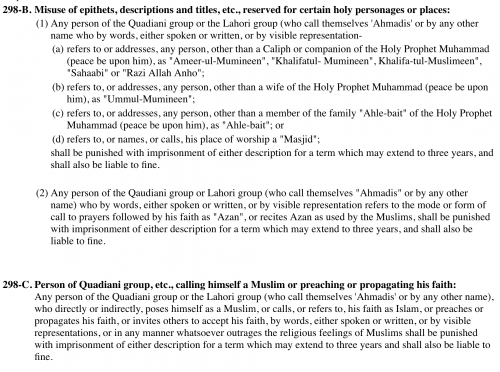 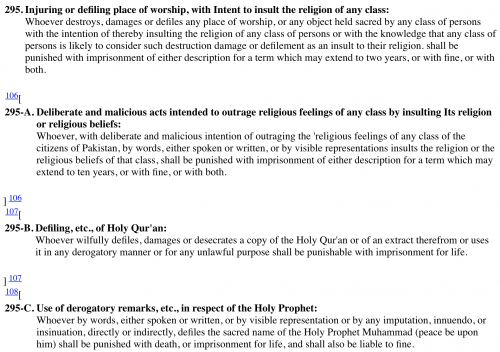 Human Rights Watch discovered in 2017, 19 people remained on death row after a court convicted them of blasphemy. That same year, the country “witnessed an increase in blasphemy-related violence while the government continued to encourage discriminatory prosecutions and other forms of discrimination against vulnerable groups by failing to repeal discriminatory laws and using religious rhetoric inciting hatred against minority groups.”

The leader of the Tehreek-e-Labaik (TLP) party also called for the ouster of Prime Minister Imran Khan’s government over the case of Asia Bibi, who was ordered freed by a Supreme Court panel earlier in the day.

“The patron in chief of TLP, Muhammad Afzal Qadri, has issued the edict that says the chief justice and all those who ordered the release of Asia deserve death,” said party spokesman Ejaz Ashrafi.

The party has launched street protests blocking roads in major cities to condemn the ruling, which was welcomed by human rights advocates.

The demonstrators have staged sit-ins and thrown rocks at police. Authorities “invoked Section 144 of the Criminal Procedure Code, which prevents the gathering of more than four people.”

Khan blasted the demonstrators: “You are not aiding Islam by talking about killing judges and by killing our generals who have sacrificed so much for our country. I am appealing to our people: Do not get caught up by the worlds of these people who only want to increase their vote bank.”

The Associated Press reported that two officials were assassinated who defended Bibi:

Salman Taseer, the governor of Punjab province, was shot and killed by one of his guards in 2011 for defending Bibi and criticizing the misuse of the blasphemy law. The assassin, Mumtaz Qadri, has been celebrated as a martyr by hard-liners since he was hanged for the killing, with millions visiting a shrine set up for him near Islamabad. Pakistan’s minister for minorities, Shahbaz Bhatti, was assassinated later that year after demanding justice for Bibi.

Unless God intervenes, I expect this woman to be slaughtered by the Muslim mobs shortly. So far, He seems to be doing a good job of taking care of this mother.

Makes me glad to live in the USA.
People think we have problems.

Already starting in Eurabia … then GB and later… USA if not careful.

These psychos are probably saving for a franchise from Ben & Jerry’s.

And this is what mainstream “moderate” Islam in the vast majority of the world looks like.

The religion of peace is so wonderful. I can’t wait for it to replace western civilization.

“If our religion of Islam comes down heavily upon commission of blasphemy, then Islam is also very tough against those who level false allegations of a crime”

It is? Allegations of blasphemy are leveled against non-Muslims all the time, as retribution for getting uppity or as a means of stealing the target’s property (or, in some cases, simple sadism). Those Muslims involved are never punished, in part because a non-Muslim generally cannot accuse a Muslim of a crime or testify in Islamic courts.

The reality is she (and maybe some of the judges to boot) will have to get out of there. Hopefully some organizations are working on that now. Probably she will end up in a Commonwealth country.

Islam is the religion of peace … there is nothing more peaceful than a cemetery!

The judges have said that the woman is factually innocent. The crowds aren’t bothering to claim otherwise.

Therefore, this is not about the government’s ability to put Christians to death for saying things Islam considers blasphemous. This is about the court applying skepticism – ANY degree of skepticism – to Muslim women’s ability to kill a Christian woman to through the Islamic legal system by false allegations of blasphemy.