Ocasio-Cortez: Defeating Global Warming Just Like Fighting the Nazis or Something

Ocasio-Cortez: Defeating Global Warming Just Like Fighting the Nazis or Something 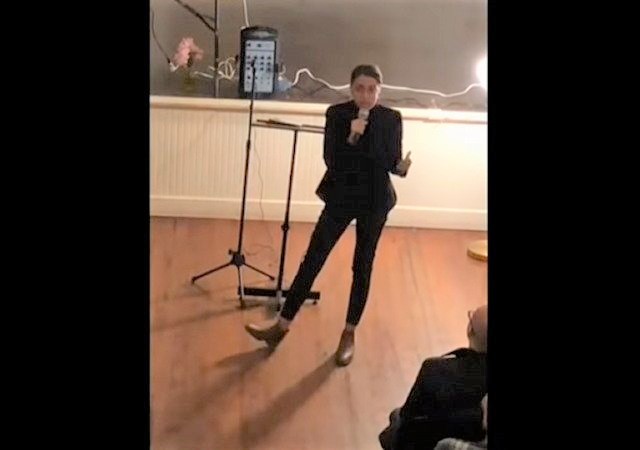 The left’s new favorite Democratic Socialist, Alexandria Ocasio-Cortez, appeared at a town hall meeting in Queens on Friday night and compared fighting global warming to defeating the Nazis in World War II. It is becoming increasingly difficult to take her seriously as a person, let alone as a candidate.

Ocasio-Cortez: We Must Use Blueprint From Defeating Nazis to Defeat Global Warming

Ocasio-Cortez appeared at a climate change town hall in College Point, a neighborhood in the New York City borough of Queens, where she discussed her “radical” plan to tackle global warming, according to a clip first flagged by the Republican National Committee.

“We had a direct existential threat with another nation and at this time it was Nazi Germany and Axis, who explicitly made the United States as an enemy, and what we did was that we chose to mobilize our entire continent and industrialize our entire continent, and we put hundreds of thousands, if not millions of people, to work in defending our shores and defending this country.”

As you can probably imagine, this has sparked a strong reaction on Twitter. Here are some responses, via Twitchy:

uh – besides resolve, the Nazis were defeated by petroleum, steel and explosives.

So a massive amphibious landing of infantry and armor on the Normandy coast will stop global warming?! Weird.

WAIT! Why doesn’t Occasionally-Cogent think that COMMUNISM was an existential threat? The Cold War? Because Reagan didnt seize control of the economy to fight it.

Why doesnt Occasionally-Cogent think TERRORISM is an existential threat? Because GWBush didnt seize control either.

She couldn’t read a friggin blueprint much less draw one up if her life depended on it. Keep it up honey. You’re the blueprint for the Red Wave.

Just when you thought she couldnt say anything dumber…

This sort of talk might play well to a crowd of leftists in greater New York City, but to average Americans it comes off as pure lunacy. May she keep talking from now until election day.

We faced no existential threat from the Soviets, huh?

One thing is true; we do face an existential threat from the Druidic religion of anti-science and anti-liberty.

I do appreciate her attempts to make my dog look smart.

Not to mention her singing “Springtime For Hitler and Germany.”
https://www.youtube.com/watch?v=HPXHRX8Q2hs

(Isn’t that what she’s doing in that picture?)

Every dog I’ve had is smarter than this communist witch.

” the stupid is strong with this one, skywalker. “

It horrifies me to realize there are a lot of people who will vote for this moron.

If we don’t take back our schools, that won’t change.

Uh-huh. Mobilization (in a low-carbon footprint sort of way, of course) and a permanent war footing. Since they can’t measure “global warming” without lying about it, there can be no “V-E Day” when the menace is officially ended. Therefore, what she’s preaching is something we’ve heard before—

We’ve alwasys been at war with Eastasia.

This wretched little monster is pure 1984.

Last paragraph. She will be elected by NYC leftists, not average Americans.

Has she gotten Canada on board yet?

Maybe AOC’s been listening to Hank Johnson (D) who thought Guam would tip over and capsize. Not unreasonable to conclude mobilizing a continent is just a matter of using a really big outboard motor.

This woman is a prime example of how poorly educated college graduates are these days. While I won’t disparage every college educated person, I know the holes, that are growing ever wider, in the younger people with their education needs to be augmented by the parents. I had provided that to my children, but it is getting worse and no remedy is being looked at to bridge the gap of ignorance.

History isn’t being taught, it is more social aspects and feelings about the impact of history without there being context. Without history as it happened we are doomed to echo the problems and not see them till it is too late.

This woman was supposedly educated in economics. Given her political stance, it shows a dramatic failure in her education. When it comes to just about every issue she sounds like a moron, zero idea of the connections between various historical context, zero idea of reality. It is frightening how someone this ignorant, or possibly even of incredibly low intelligence could be given any kind of power over us. The voters who put this woman in a position to be elected, which is highly likely, should be ashamed of themselves for having voted for her simply because she is a somewhat pretty face and bribed them with promises of “free stuff” which she cannot deliver.

She doesn’t even seem to know how government works, and the role the various parts of our government are put together.

I have zero faith in her learning the basic things she needs to know to function in life, let alone in government. And the media pushing her to be some kind of rising star within the ranks of power is truly frightening. She became a rock star of the leftist National Socialist party because of doing nothing but winning a primary of little notice and poor turn out voting. Yet now she goes around as if she was elected to be some quazi president pushing socialism on a national scale.

The ignorance is strong in this one, but hearing those who support her, it is a growing disease within her voting base, and that should scare the living crap out of everyone in this country. And that it doesn’t, that Bernie Sanders and the ever further left moving party is in a position where it might gain power, makes me want to cry for this once great country.

Total waste of my time. I was firing on maybe 10% of my brain’s cylinders to finish the course work.

If I were a youngster today, I wouldn’t even consider university unless I was going to professionaalize in a field in which I could make good money. Why go into debt for decades for a liberal arts degree? I can do the course work on my own!

Not having a degree didn’t stop me in the least. I did very well in the Navy and have had no problems getting jobs after retirement. None at all.

“…degree in Economics…” I double checked her bio (via wikipedia) and it says she has degrees in Economics AND International Relations. This, to me, further devalues the degrees. What the hell do they teach these days.

Like some commenters here, I also got my BS “later in life”, mid-30s. I did it while working full time. Some of the stuff other students produced in class was mind-boggling. That was in the 70s and it appears nothing has changed.

If you have not already done so, you need to read her Wiki bio. Prepare for some interesting stuff. A couple fingers of the alcoholic beverage of your choice will help.

“Hey, Ceyhun, weren’t you the guy who taught Alexandra her Introductory Microeconomic Analysis? And I put taught in air quotes.”

“And she took your course, Ishitya Babaleena, Introductory Macroeconomic Analysis. When she won the Democrat primary a few months ago, weren’t you the one boasting how you gave her an A? Well, whaddya say now? Level with me. Did she earn the A, or did you give her the A?”

“And who moderated the seminar on EC 332 Market Structure and Economic Performance where Alexandra not only lead the seminar but several professors from the department gave her extra credit. Stand up and take your bows. And who gave her the A in EC 342 Monetary and Banking Theory? Wasn’t that you, Usmauf, or you, Tarek?”

“Ya know, we, BU, gave this young lady a degree, meaning our reputations are on the line. And so far she sounds like a dunce; like a Valley Girl complete with all the ‘likes,’ ‘totally,’ and ‘you knows.’ It’d be one thing if she was a flash-in-the-pan and would lose her bid for office, and just kinda melt away. But in her case she WILL be elected to office. I mean, she’s gonna be in Congress, and these right wing wackoes are gonna be asking her questions. I mean, real questions. And if the answers like are gonna be like the answers we’ve heard so far, like the president’s gonna be really like hopping mad. No, not that guy; like I mean BU President Brown.”

When you’re a communist, everyone else is a Nazi. They don’t have a game plan for tackling anyone on debating the issues or arguing logic so just go with “Don’t argue with them! They’re Nazis! Kill them!”

And yet the Antifa crowd, the true desires of the National Socialist Party AKA the Democratic Party, and BLM are far closer to the Nazis in the way they operate and the desires they have for the future with their party in power.

I guess this little princess of Moronville never learned that the Nazis were the National Socialist party of Germany… But yeah, it’s right wing…

She’s so cute with such big ideas.

AOC: “Synonyms. You mean like Hot Tamales? I just love those.”

Leftists do love learning a new word, then use it ad nauseam even when they don’t fully know the meaning of the words, but they sound so… intellectual when doing it. 😛

We need to work synonym toast into one of her speeches. She could be the next Emily Litella of politics.

This babette is going to give Sheila Jackson Lee some serious competition.

She’s taking lessons from Jimmy Carter, who wanted to defeat the energy crisis with “the moral equivalent of war.” And that worked out so well for him, why wouldn’t anyone copy it?

Does she know that somewhere between 50 and 100 million people were killed in WWII? I know that eliminating that many mouths to feed, that many kids to educate and that many folks to house will save a lot resources.

Is that what she’s actually telling us?

This is the rapidly expanding new demographic in the US. No matter how ridiculous get used to it.

She is the PERFECT representative for the millenial liberal.

Arrogant, vocal, and unbelievably stupid and shallow. She has no actual plan to do anything she wants, she just thinks somebody else will come up with something if she screams slogans loud enough.

She’s so cute. Until you’re in her concentration camp.

How stupid is this woman? About this stupid:

In 1958 Mao Zedong ordered all the sparrows to be killed because they ate too much grain. This caused one of the worst environmental disasters in history, starving 36 million Chinese to death:
https://www.thevintagenews.com/2016/09/26/1958-mao-zedong-ordered-sparrows-killed-ate-much-grain-caused-one-worst-environmental-disasters-history/

Now remind me which beach the Mexican Army landed at Normandy or Rosita the Riveter was working at which plant.