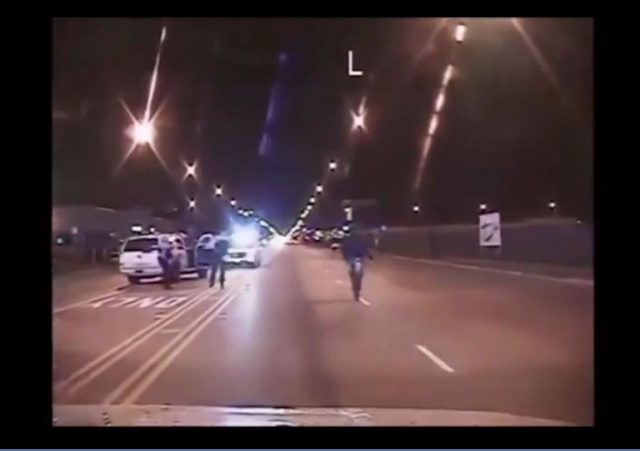 Not that it ought to be any surprise to anybody who looked at the evidence, but Chicago Police Department officer Jason Van Dyke has just been found guilty by a jury of second-degree murder in the shooting death of Laquan McDonald.

There was a hypothetical narrative under which Officer Van Dyke’s narrative of innocence might have been compelling, but he never offered such a narrative, even after testifying in his own defense — likely because he hadn’t the evidence to support it.

There appears to be little question that McDonald was a PCP addict who was staggering down a public way with a knife in hand, and who was non-compliant to police orders. That, however, is not sufficient cause to be shot and killed by police.

Here’s that video of the shooting–McDonald dies here, so if you’re sensitive to such things, don’t click the image:

The relevant legal standard for the use of deadly force by police is that the suspect was presenting an imminent threat of deadly force to innocents, either officers or the public. In this particular case, a weak but theoretical argument could be made that McDonald represented such a threat as he wandered down the public street with a knife in hand. Once Van Dyke had shot him eight to nine times, however, and planted McDonald on the pavement, whatever threat McDonald presented was likely neutralized. And yet, after that, Van Dyke shot McDonald another eight or so times.

Might it be possible that Van Dyke shot McDonald on the ground to protect another officer from harm who was coming in to handcuff McDonald? That would have been a theoretically acceptable explanation for Van Dyke’s continued use of force. Ultimately, however, not even Van Dyke made that claim of justification, even when he took the witness stand in his own defense at trial. Instead, Van Dyke claimed to have perceived movement and apparent threat by McDonald that was outright contradicted by actual dash cam video of McDonald.

I would note that if we were to put Van Dyke on a “lie detector” device he might well pass as telling the truth about what he perceived re: McDonald’s threat to himself or others. But just because a purported defender genuinely believed the force they were using was lawful, doesn’t mean that the folks tasked with judging that use of force will agree–especially when the evidence is contrary to that perception, and perhaps even when the evidence is not obviously contrary. Caveat emptor.

Criminal Law, Law of Self Defense

Strange. De Paul ( in the “loop” ) let out school when it was learned that the verdict was reached and would be announced.
Workers took off, and the CTA stations were crowded with people going home from the loop to lock down.

Seems a lot of people were surprised.

I heard early stories of the case then realized that I might be a juror and stopped watching. The video seems compelling, and if it were daytime I would vote for guilty. At night, I am not so sure that what the camera picks up is what van Dyke saw. I would insist on seeing the scene at night if I were a juror.

Strangely they came back not guilty of official malfeasance.

My employer (University of Chicago) also let people out early, and encouraged everyone to get out and get home. The Dean and others also thought that the ‘wrong’ verdict would lead to massive rioting.

They need not have worried. Everything I’ve seen supports what Mr. Branca says here. The story, the video, all the courtroom proceedings have been front page news. How the police and the mayor thought at the beginning of this that they could brazen it out is just plain strange.

I generally support the police. Based ONLY on the video I would have voted to convict. I just don’t see how seeing the scene at night would justify the second volley after the guy fell.

The officer murdered Laquan. Officers are not “judge, jury, and executioner”. The jury decided correctly. This was a needless waste of two lives (Laquan’s and Jason’s) and has caused never-ending pain for many others. The officer had many previous complaints against him, dating back to 2001 (see here: https://cpdp.co/officer/29310/jason-van-dyke/ ). This person should never been allowed to carry a weapon as an officer. I hope the judge imposes an extremely stiff sentence and uses this case as an example, to serve as a warning to other officers who conduct themselves in a similar fashion as Jason Van Dyke.

Van Dyke had several problems to overcome, IF he wished to ju8stify this shooting.

The first was that McDonald did not represent any true, immediate threat to anyone. And, as he had not already killed or seriously harmed another, it was not possible to reasonably argue that his escape would have endangered the public.

The second was the number of rounds fired by Van Dyke. While it might have been possible for Van Dyke to attempt to argue that he had been trained to empty his weapon into an “attacker”, in a close range encounter, the fact that he continued to shoot McDonald, while McDonald lay on the ground, torpedoed that line of defense. While some LEAs DO train their officers to continue to shoot until the threat is neutralized, in the case of a man with a knife, this would usually be accomplished once the man was on the ground.

My only fault with the prosecution was that it was overcharged. While 1st degree homicide was reasonable, given the likelihood that it would be reduced, by a jury, to 2nd degree homicide, sixteen counts of aggravated battery, one for each round fired, was way over the top.

If he’d just shot him the 8 or so times when he was on his feet, he might have been able to beat it or at least tell a reasonable story about how he perceived a sudden movement as him starting to run at the officers.

But then shooting him on the ground that many times? Utterly unjustifiable.

Should’ve been manslaughter not murder.

The video showed that the suspect was not an immediate threat to the officers or anyone else. That fails the test for the use of lethal force, and the 16 rounds fired were excessive anyway. This tragedy is a good example where “less lethal” force would be appropriate to bring a potentially hazardous subject into custody.

A Taser would work most of the time. (I have been Tased, as have all officers who carry Tasers, and it’s painful, but nothing like a bullet.) Another method, still short of lethal force, would be beanbag rounds from a shotgun. The police involved in this incident should have been issued and trained with Tasers.

“The video showed that the suspect was not an immediate threat to the officers or anyone else.”

I’d beg to differ. This man was walking down the middle of the street brandishing a knife. He could have killed anyone within 20 feet of him in two seconds or less.

That said, it seems like the LEO was a bit over the top, and should have stopped shooting when the threat was neutralized (as they are taught).

Sentence didn’t make sense considering the jury instructions. To convict for second degree murder all elements of 1st degree murder must be met with a mitigating circumstance on proponderance of evidence. Then guilty on aggravated battery for each shot, but not guilty on official misconduct.

Unlike many jurisdictions, Illinois does not require that a person act with premeditation in order to commit 1st degree murder. All that is required is that a person intentionally uses force against another which he knows is likely to cause death or great bodily harm and which does, in fact, result in the death of the subject. 2nd degree murder, in Illinois is similar to voluntary manslaughter in other jurisdictions. It allows for a lesser penalty if the person using the deadly force does so in the inaccurate belief that he is doing so legally, even though the use of force is not lawful.

In Van Dyke’s case, he testified that he used deadly force because he believed that McDonald was an immediate threat to him and that an attack, upon him, was imminent. The jury apparently decided that in the “fog of war” Van Dyke actually did believe this, even though McDonald did not present an credible, immediate threat to Van Dyke. Also, many juries want to give a LEO the benefit of the doubt in situations such as this. But, the number of rounds fired and McDonald’s distance from Van Dyke and his attitude [lying on the ground] would lend itself to a conviction for 1st degree murder.

So, what’s the functional difference between this case and Shelby being acquitted for shooting Crutcher in Tulsa?

Shelby was acquitted, and obviously is now back in a position to gun down another drug-addled but not horrifically dangerous man wandering down the road.

In the Tulsa case,
the defendant (Shelby) was female,
the victim was unarmed, and
other officers suitably equipped with tasers were on scene and ready to act.

In this Chicago case,
defendant was male,
victim was armed but not with anything presenting an immediate menace (i.e., a knife at a distance),
the officer didn’t have a crowd of backup officers with handy deployed tasers,
multiple shots were fired into the victim,
more shots were fired into the victim after he was down and even less of an immediate menace than when he was standing.

So what makes one guilty, and the other not?

For my money, both should be guilty, but of course I wasn’t in the jury box at either trial and know only what miserable information dribbles out through the press.

The Terence Crutcher case, in Oklahoma, had several glaring differences.

First, Crutcher reached inside the open window of his truck and was leaning back out when Shelby fired. It was not known if he was retrieving a firearm from his truck or not. McDonald had a visible weapon, a knife and made no movement which would suggest that he was reaching for a distance weapon, such as a firearm.

Second, Shelby fire one round, not 16.

Now, Shelby COULD have been convicted of manslaughter, as she had not clearly identified that Crutcher had any deadly weapon, including a firearm. However, given the climate at the time [subjects attacking LEOs for no apparent reason], Crutcher’s seeming indifference to lawful commands and the fact that he reached into his truck window for an unknown reason, Shelby was able to credibly argue that she had a reasonable belief that he was reaching for a firearm and that she fired the minimum number of rounds to neutralize that threat, one. Then you have the usual intangible factor that this happened in Oklahoma, where juries are more willing to give LE the benefit of the doubt.

Thanks AFB! Appreciate your work!