The beginning of the end of Merkel as chancellor? 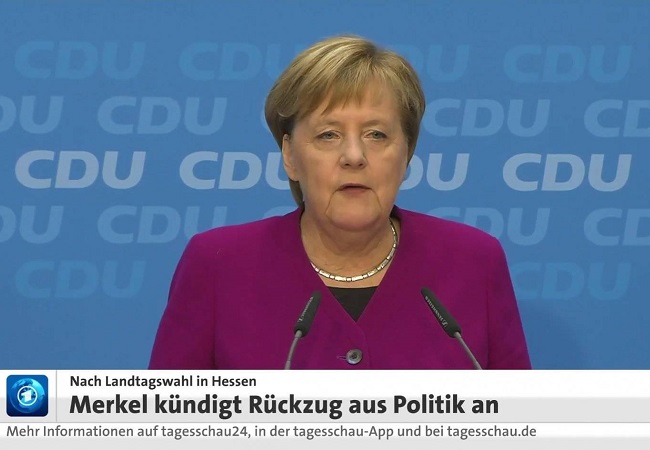 German Chancellor Angela Merkel announced she will step down as leader of her Christian Democratic party (CDU) after massive losses in Sunday’s election in the key German state of Hesse. Germany’s ruling CDU suffered a second electoral drubbing in almost a fortnight, after voters in Bavaria and Hesse abandoned the party in droves.

Speaking to the media, Merkel also confirmed her decision not to seek another term as Chancellor in the 2021 general elections and ruled out taking a position at the European Union after leaving the office. The four-term German Chancellor was expected to stand for a re-election as leader in the party’s conference in December.

The right-wing Alternative for Germany (AfD) welcomed Merkel’s decision to quit the CDU’s leadership. The party’s national spokesman Jörg Meuthen called it “good news” and expected Merkel to “give up her chancellorship soon” as well, German broadcaster Deutsche Welle reported.

German weekly Der Spiegel was one of the first news outlets to break the news:

CDU chair Angela Merkel will not stand for re-election as leader of the party. She announced this in the party board meeting on Monday morning.

Her original intention was to seek re-election at the Hamburg conference in December. Apparently she decided to take responsibility for CDU’s debacle, which again became apparent in state elections in Hesse.

According to Merkel’s announcement in the board meeting, she wants to remain Chancellor. This is very surprising given the fact that Merkel always stressed the need for the party leadership and the office of the head of the government to remain in the hands of one individual. [Translation by the author]

In a parliamentary system such as Germany’s, where the real power rests with the ruling party, Merkel’s move makes her a lame duck chancellor for all practical purposes. No conservative chancellor before her has given up the party leadership while in office.

Merkel’s decision comes at a bad time for the EU, as Brussels negotiates British withdrawal from the bloc and faces pressure from the United States over its trade deficit. “Merkel’s retreat is likely to make Germany more introverted and unstable and therefore less able to lead in Europe or internationally,” British business daily Financial Times noted. “That could mean that Germany will take more “egocentric” positions on issues such as refugees and eurozone reform,” the newspaper added.

Without strong German leadership in the foreseeable future, the mantle of EU’s leadership now passes on to French President Emmanuel Macron.

Merkel’s gradual and unceremonious departure will come as a great loss to the global liberal elite, who crowned her the “leader of the Free World” once President Donald Trump took oath of office in the United States — pinning all their hopes on German leader.

“Merkel’s predecessor, Gerhard Schroeder, had stepped down as head of his left-wing SPD in 2004.”

Funny how Merkel’s Germany has been one of Gazprom’s biggest customers – until Trump came along and called her out on the deal.

Army buddy from Texas used to say, “Wieders to y’all”.

Mission accomplished. Europe has begun to succumb to the disease of Islam.

SHE IS/was HORRIBLE for Germany and Europe.

Big deal. A bit of virtue signalling, “take responsibility” for the Party’s hammering from the voters . . . but she still gets to sit on the throne. A compromise in which she doesn’t really give anything up.

I’d hope that even in Germany, “that’s not how it works.”

Drip, drip, drip… The beginning of the end.

It’s going to take three years for her actual departure. That’s a very, very long time. Not a bad deal, which should be an object lesson in why some systems make lame ducks impossible to maintain in power.

She’s kind of like the dark parody of Odumbo standing before a burnt-out city in America, saying, “My work here is done,” only in Europe

What a cancer merkel has been.