Melania has more class than this guy has in his entire body. 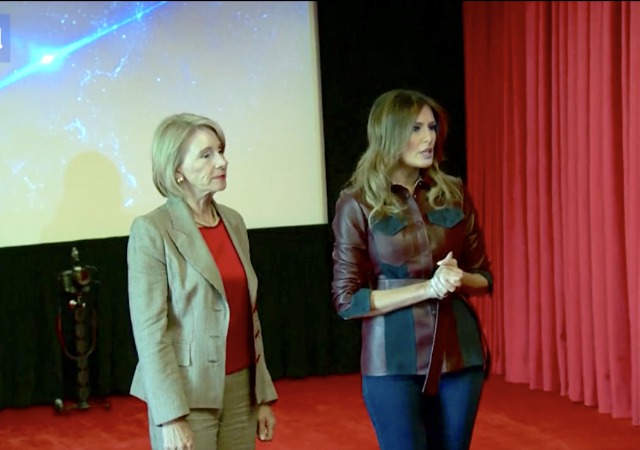 After Andy Lassner, a producer for The Ellen DeGeneres Show, tweeted the other day that he’s “way more afraid of another Melania getting in to this country than” he is of the thousands of migrants in the caravan marching towards the U.S. border.

First Lady Melania Trump’s office tweeted him an invite to her gathering of children at the White House to talk about kindness and screen the movie Wonder.

You can guess how this man child responded.

I mean, who wouldn’t want another Melania? Not only is she gorgeous, but she is well educated and can speak five languages fluently. She has class and grace and came to the country legally.

Here is the response from Melania’s office:

Hi @andylassner @flotus is hosting children at the White House today to talk to them about kindness … should I save you a seat? https://t.co/qi4AxqfRZI 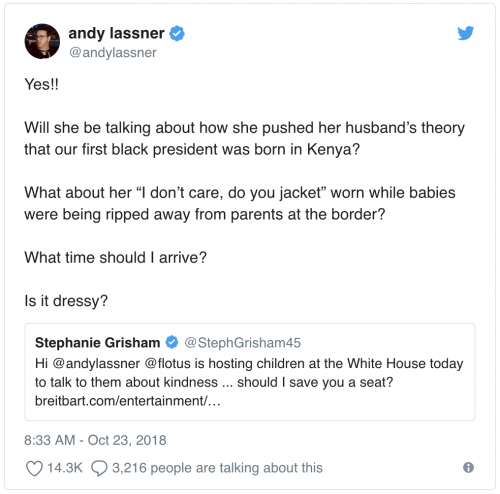 Grisham told Lassner to check his facts before he arrives because Melania explained that jacket during an ABC interview last week. But actual facts don’t matter, right? It’s all about YOUR facts.

Lassner has a history of making rude comments to Melania: 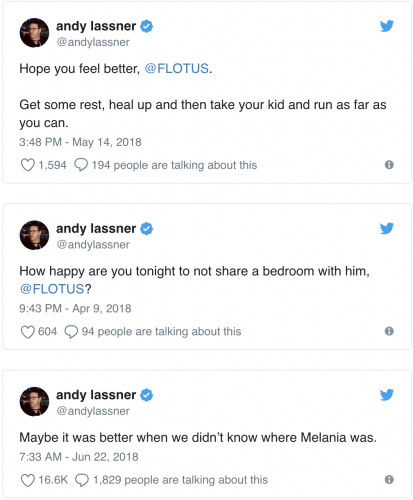 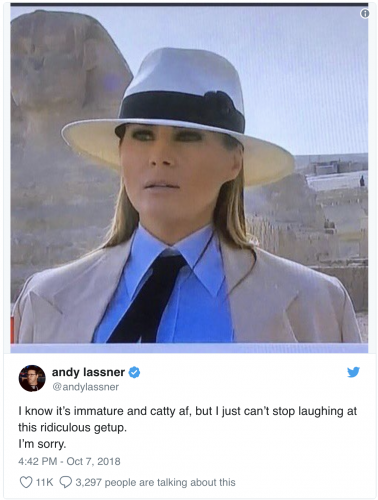 The event went off without a problem as Trump hosted 30 sixth-graders from a local school. She chose the movie Wonder because of its positive message to be kind to others as the kid in the movie has a facial deformity, which causes people to bully him. From The Washington Examiner:

Trump asked the students how they showed their peers kindness and then encouraged them to respect each other in person and online.

“As you may know, October is National Bullying Prevention Month and I encourage everybody to be kind to each other, to treat each other with respect in every day life and social media. Can you do that?” she said.

People have questioned her sincerity since President Donald Trump has a history of attacking his political foes. Melania “has acknowledged she’s aware of the skepticism, but said it won’t stop her from trying to combat the issue.”

Thank you to the students & teachers from @DPApcs who joined me & @BetsyDeVosED to watch the movie #Wonder in the @WhiteHouse theater today. What a wonderful message! #BeBest #BullyingPreventionMonth #ChooseKind pic.twitter.com/rdGjOfcnCm

Andy sure puts the ASS in Lassner.

notamemberofanyorganizedpolicital in reply to gbear. | October 25, 2018 at 4:43 pm

She’s such a FAKE!

Apparently, a woman is only allowed to have her own voice if she is a leftist, so say the leftists.

She’s entitled to her opinion as long as it’s the same as everyone on the left.

notamemberofanyorganizedpolicital in reply to NateWhilk. | October 25, 2018 at 4:45 pm

….and as long as all the Leftist Men allow it.

Can’t tell you how many histories, autobiographies, etc. I’ve read about “modern” liberated women, and they all tell how they were segregated to the kitchen to fix sandwiches and fetch coffee while their Leftist Men sat around an planned the destruction of our Republic!

I don’t think Andy sleeps with a super model.

It’s a wonder he sleeps at all!

Unless someone is aware of gay male or “trans” Caitlin Jenner-type male-female type supermodels that still have the complete male package.

From a psychological standpoint, I find that the incessant political rants and sermonizing from people working in the entertainment industry, to be disturbing. It’s unhealthy to be so politically-obsessed. Sure, I have my opinions, but, I’m not “tweeting” throughout the day, in a snarky and egotistical effort to convert the masses.

And, we don’t see professionals engaged in more — shall we say — productive fields and industries, e.g., engineering, medicine, construction, plumbing/electrical, aerospace, agriculture, pharmaceuticals, etc., engaged in infantile self-aggrandizement and antics via social media. Presumably, because most of the people working in these fields are engaged in actual productivity.

The entertainment industry twits simply have far too much free time on their hands.

although certainly not all, but many in the entertainment industry have written about their need to perform for approval. I can’t recall a specific bio but for some, it is a deep necessity.

So they expand this to include tweets and rants of a political nature.

And to be sure, society holds up these celebrities as paragons of excellence in EVERYTHING, including political views and morals. Witness the sales of the magazines at the registers in supermarkets.
How many followers does Kim Kardashian have, and WHY??!!

Show-biz narcissist-atheists are devoid of spirituality and healthy humility, and turn to the shallowness and laziness of the cult of liberalism to fill their spiritual void and to rationalize their narcissistic behavior and mindset.

They are juvenile jerks, stuck in a cult of stupid, desperately seeking approval of their demented – and otherwise incompetent – cult parents.

Above all, they are the most intellectually lazy people on the planet.

Boycott their products, or you’ll continue to enrich them, and their fascist handlers.

It’s not politics they are obsessed with, it’s competition. Politicians compete with Hollywood for the attention of the masses.

Frankly, I think Lassner is also personally obsessed with Melania in the same way a drag queen can become obsessed with the celebrity they impersonate. Their narcissism convinces them that their version is better than the original (it’s why he admits to being catty about her outfit, he could do it better).

One has to wonder why they feel so socially insecure they have to constantly virtue signal to their fellow Hollywood denizens.

Also, I continually find it interesting how emotionally invested Leftists are in consistently branding the sainted Obama as the first “black” President, when, under their usual rubrics, these race-obsessed idiots would properly — and, accurately — be calling him “bi-racial.” It’s as if they believe that an accurate description of Obama’s mixed heritage somehow diminishes his ethnic novelty and usefulness, from self-congratulatory and virtue-signaling standpoints. They must have their precious “black” President, even if 50% of his heritage is comprised of stock from the allegedly evil “white man.”

I mean, Obama himself sure played up his ethnic mix when he was first running for President in 2008, painting himself — quite fallaciously, we know now — as the allegedly enlightened, physical manifestation of racial harmony.

Come on, what do you expect from these overpaid, over-enabled and protactedly adolescent clowns?

Donald Trump is a counter puncher. Notice how they never say what prompts his punches? Only suckers allow people to hit them and not do anything about it. That’s how you get bullies.

Our “First Black President” was born in Hope, Arkansas.

flotus is such a woman of class and style–her own person, genuine and sincere–such a tremendous improvement from her she-boon predecessor–not really even in the same universe

the leftists/hollywood mob are so consumed by their own insecurity complexes that they simply can’t cope with gracious, confident adults like flotus who flourish in their own lives

They tried rationalizing the pathetic mooooochelle obama into a glamour queen.

What more needs to be said?

Wish I had a dollar for every grocery checkout magazine I turned face-in from 2008-2011 because they all had airbrushed pics and glowing headlines about the “glamorous and stylish” First Uruk Hai on the cover.

Try to find a single issue of anything with glamorous and stylish Melania on the cover, since 2015.

“President Donald Trump has a history of attacking his political foes.”

So he just attacks political foes for no reason? It’s like in the NFL: they always flag the second guy

And yet if the scene were inverted with a (D) president’s first lady and a (R) entertainer saying the same things, it would (of course) run 24×7 in the media to show what a meanie the entertainer was.

Want more Trump? This is how you get it.

Strong point… when your house is calling a stripper “horse face” to a national audience and then lecturing others about being kind.

However- if we needed/wanted a nice guy, Mitt Romney’s wife would be FLOTUS and hosting this event…while the Dems filibuster Mitt’s SCOTUS nominees.

Yeah, it’s kind of like supporting Antifa and accusing the other side of incivility.

Melania really is quite a woman. NOT A SINGLE ONE of her idiot critics could hold up in the spotlight in the manner she has.

Not merely that, but she has displayed an incredible amount of taste, tact, class, strength, intelligence, wisdom and personal power.

Not that he needs it, but she makes DJT appear very, very substantial: let’s see one of her critics get and keep a woman like this.

” let’s see one of her critics get and keep a woman like this….”

-bill clinton got hillary klinton
-barry odumbo got moooochelle obama (or is it ‘michael?’)
-bernie sanders got a woman being investigated by the FBI for fraud
-Chuck schumer got Iris Winshall
-joe scarborough got mika brezinski
-chuck todd got kristian todd (his wife got 2 million dollars from bernie sanders campaign; Corrupt Chuck never disclosed it)
https://www.theblaze.com/news/2018/04/20/chuck-todd-gets-questioned-about-hypocrisy-his-wifes-company-has-been-paid-millions-by-democrats

So the FLOTUS extends an olive branch to this guy to attend an event that people of all positions can relate to and his response was typical of an immature and ignorant person.
These antics by the far left are really akin to a spoiled child acting out, only they are adults and they have some anger and metal issues going on.

When they go low, she really does go high.

Since Ellen lets this ass get away with this nonsense, she is complicit. She needs to be called out on herincivility,

Lassner, as such a warm, compassionate, loving individual, why don’t you take in and support this latest wave of illegals on their way to the USA. Take responsibility for them as their sponsor. Feed, clothe,house and pay their medical. Also, if they commit any crimes you are held responsible as well. Come on lASSner, show what you are really made of.