The Mexican government said that the caravan has started to shrink. 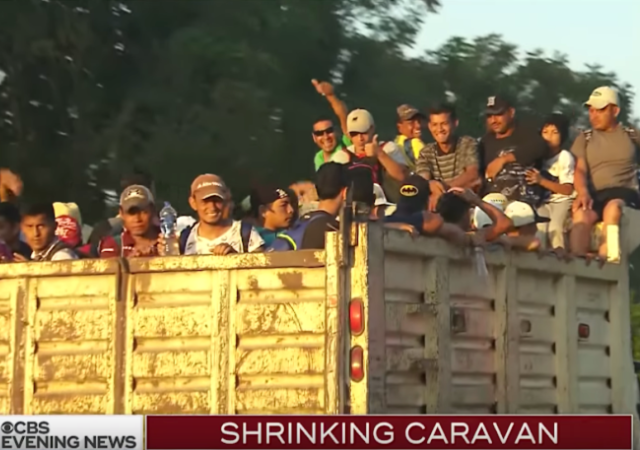 President Donald Trump said he plans on “bringing out the military” to stop the thousands of people in the migrant caravan headed to our border.

Another report stated that Secretary of Defense Jim Mattis “is expected to sign deployment orders as soon as Thursday that could send 800 or more troops to the border.”

Trump has repeated threats to send the military to the border to defend it against the mostly Honduran migrants who continue to march to the border. The number of people within the caravan has fluctuated, but USA Today reported that the Mexican government has determined the number has fallen to 4,500 as people have either stopped or asked for asylum in Mexico:

Mexico’s Interior Ministry said immigration officials have received 1,699 asylum claims, while 495 Hondurans have asked to be returned to their country of origin. The Central American migrants come mostly from Honduras but also includes those from Nicaragua, El Salvador and Guatemala. The status of about 500 other migrants is unclear. United Nation officials estimated Monday there were more than 7,200 migrants in the caravan.

How many troops was he prepared to send to the border?

“As many as necessary,” he replied.

Trump has pummeled Democrats for weeks on immigration, harping on a proposal raised by some in the liberal wing of the party to abolish Immigration and Customs Enforcement. Though the idea is unlikely to ever become law, Trump has used it to paint Democrats as soft on crime and border security.

He tweeted this morning:

Brandon Judd of the National Border Patrol Council is right when he says on @foxandfriends that the Democrat inspired laws make it tough for us to stop people at the Border. MUST BE CHANDED, but I am bringing out the military for this National Emergency. They will be stopped!

I’ve written before that the Democrats had complete power from 2008-2010 and could have changed immigration laws then.

Three administration officials told CNN that Mattis and others are still working on ironing out the details on the troops:

The officials tell CNN final details are being worked out including where the troops will come from and their specific tasks.

The troops will not engage in lethal operations to stop the migrants. Instead they are expected to provide fencing, wall materials and other technical support at several key points along the border where it is believed the migrants may try to cross.

The troops will also provide tents and medical care for border authorities in those areas. The troops retain the right of self-defense, but border patrol officers will still be the ones physically stopping illegal migration, the officials said.

800 more troops? Are they going to be able to feed all those immigrants with 800 troops? /sarc

notamemberofanyorganizedpolicital in reply to stablesort. | October 25, 2018 at 4:52 pm

Look at this. No surprise really……

Unless the horde of illegal aliens consists entirely of beavers, they’ll be able to feed their riot control batons to them for a good long while.

Drop all the bridges south of the border that are in their line of march and force them to do water crossings. Concertina wire is also your friend in these situations. I’m sure a couple of SeaBee Bn’s could get some quick fortifications built to funnel all of them to where we want them to go.

Instead they are expected to provide fencing, wall materials and other technical support at several key points along the border where it is believed the migrants may try to cross.

“The troops will not engage in lethal operations to stop the migrants. Instead they are expected to provide fencing, wall materials and other technical support at several key points along the border where it is believed the migrants may try to cross.”

A well-defined mission is one key to success, but does ‘wall materials’ mean this?:

Never let a crisis go to waste would be a spectacular thumb-in-your-eye against Leftists if Trump used the military to fund & build the border.

I know, I know. It wouldn’t be prudent, blah, blah.

There is no way those out of shape people traveled over 30 miles on their own, as that mournful reporter claimed, at least not without help.

The only way 800 troops will help is if they are willing and allowed to use force against an invading hoard, not a “caravan” as that is not what this is.

If they get in expect things to get really ugly on the borders, we already have LaRaza and Antifa here who will look to disrupt things. Those thugs and others are hanging around the borders to sew discord to assist those in the invading hoard.

I hope I am wrong about the intensions of this mob.

I’m all for using the military to build the wall. Send in the RED HORSE squadrons and Seabee battalions! But, an emergency such as this calls for more than just engineers. We need MP units. We need infantry units.

A Toyota Tacoma and a mini-gun would be sufficient.

I wonder if the troops will be allowed to carry live ammunition? So often our troops have been put in harm’s way without a way to defend themselves.

Trump isn’t getting this done.

Nobody likes the artificial government slowdowns that would bring the confrontation over our sick laws to a head, but that’s what we need.

Trump isn’t getting it done.

As to my post above. If the political fall out from a Kent State type incident is more important than putting our troops in harms way without the ability to protect themselves then it will tell us a lot about Trump. I understand the politics here but I also understand a clear attack on our sovereignty is a national security issue issue.

A report from CNN includes this from above:
The troops will not engage in lethal operations to stop the migrants. Instead they are expected to provide fencing, wall materials and other technical support at several key points along the border where it is believed the migrants may try to cross.

The troops will also provide tents and medical care for border authorities in those areas. The troops retain the right of self-defense, but border patrol officers will still be the ones physically stopping illegal migration, the officials said.

So, no lethal force except in self-defense.
We’re screwed; the country has been given up to foreigners. We live at their sufferance now.

Trump cannot get this done. Our laws say if they can touch
our soil they have to be processed, given food, aid, shelter and a hearing.

That won’t change until Congress has to tell the American people that our illegal immigration program is twice as expensive as the F-35 program and that there are almost 7 billion more people outside our borders who will come if our laws are not changed.

“The United States shall guarantee to every State in this Union a Republican Form of Government, and shall protect each of them against Invasion; . . . .”

The President as Commander in Chief can take whatever measures are appropriate to fulfill this requirement. I would like to see the President get an OK from Mexico to place US troops and border personnel inside Mexico, to keep the invasion from reaching the border (with lethal force as a last resort), but also to protect the vulnerable among them, to weed out criminals, and then to process the immediate return of all these invaders to their countries of origin.

Finally, deduct the entire expense from the foreign aid the US otherwise provides them.

800 troops is roughly battalion strength, pretty thin for that amount of front yardage, even as the crossing points for the invasion vectors are identified. Very many of those troops will be support and staff, not line. And what kind of battalion or companies from what kinds of battalions? A guess: two engineer companies, one cavalry troop, one infantry company, and a combat support company. Maybe also a Ranger platoon, air mobile.

And remember the source for this “news” and its numbers: lying networks. Falsus in unum, falsus in omnibus.

They’re supposed to all be support, just like the last time they were deployed.

800–tactically ill-prepared–soldiers is not enough to peacefully, non-lethally disperse 5-10k savages on a death march.

The only way you will disperse them is to kill them. We won’t do that so what do you want to do?