“Oh, you’re not going to use the mob word here” 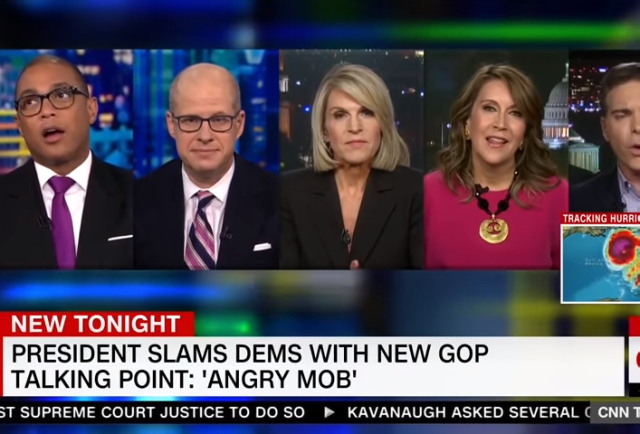 As someone who attended and wrote about Tea Party protests in 2009 and 2010, it has been surreal to watch folks at CNN and MSNBC twist themselves into knots to defend the recent actions of the left.

I clearly remember Democrats and their media allies using words like “dangerous” and “mob” to describe people who obtained protest permits and cleaned up their own trash. Everything is different now.

Groups of angry leftists are hunting down Republicans and members of the Trump cabinet to harass in public places, clawing at the doors of the Supreme Court, and accosting members of the Senate in the halls of the Capitol building. But the folks at CNN and MSNBC are clutching their pearls at the suggestion that these are mobs.

Liberal cable news outlets were outraged over the weekend when Republicans condemned the thuggish behavior of leftwing protesters and political groups repeatedly attempting to disrupt the confirmation of Justice Kavanaugh. CNN and MSNBC hosts urgently rushed to defend the throngs of activists, in a melodramatic panic over the newest addition to the GOP leadership’s lexicon: “mob.”

By Sunday morning, both cable outlets had assembled compilation videos of Republican politicians calling the rabid street opposition to Kavanaugh “a mob.” Between October 7 and 9, MSNBC ran 11 such compilation videos; CNN played five during that same window.

Show hosts, contributors, and commentators wrung their hands endlessly over the prevalence of “mob” comparisons by conservative politicians. See the video compilation below for some of the most noteworthy and enertaining reactions:

Another clip which deserves mention comes from Cameron Cawthorne of the Washington Free Beacon, which highlights a moment on CNN featuring Don Lemon and guests. Matt Lewis of the Daily Beast, who is an honest liberal, tries to say these are mobs and repeatedly gets shot down by Lemon who is suddenly a big fan of the First Amendment and says that these people are simply “upset” about the direction of the country.

This whole video is worth watching but the key exchange begins at the 3:24 mark:

Here’s a supercut of the “It’s not a Mob” frenzy:

Tucker Carlson doesn’t write many columns these days, but he published one at FOX News on this very topic yesterday:

It’s one left-wing riot after another, but leftist leaders have decided the problem is YOU

The crack political team over at The Washington Post has uncovered a brand new species of fake news they think you need to know about: Imaginary left-wing mobs.

In a piece posted this week, The Post explained that in order to win the midterm elections, those Republicans have “cast the Trump resistance movement as an angry mob.”

Now, “cast” is, of course, used here as a synonym for misrepresented. The Washington Post wants you to know that these mobs are not real. They’re an illusion.

That may surprise you, because you may have recently seen videos of prominent Republicans being chased out of restaurants by screaming progressives. You may have even read news accounts about how a Republican congressman named Steve Scalise was shot with a high-powered rifle by a Bernie Sanders supporter.

The Democrat Media Complex thinks no one remembers anything and their arguments would be stronger today if we didn’t. Noah Rothman of Commentary recently did a little digging to remind people of how the Tea Party was described:

“Several within the mob had signs protesting ‘socialized medicine,’ as Politico’s Glenn Thrush points out.” https://t.co/QQxNPi641Q

“On the eve of the August recess, members are reporting meetings that have gone terribly awry, marked by angry, sign-carrying mobs and disruptive behavior” https://t.co/Y7faOBQLHn

This one by Charles Blow is just called “Mobs Rule” and opens with the lede “Welcome to the mob.” https://t.co/dMGOd2PYCM

“Historical fraudulence is like a disease, a contagious psychosis which can lead to mob hysteria and worse.” https://t.co/gzhYbpDjqC

“‘It doesn’t make me nervous as all,’ the congressman said, when asked how the mob-like atmosphere made him feel. https://t.co/juqec785YO

Taibbi: “Beneath the surface, the Tea Party is little more than a weird and disorderly mob…” https://t.co/TOCUooxWx3

Best Trump from the elections.

Trump: “Well then, what would you call them?”

I dunno. If it looks like a duck, it’s duck. Who am I going to believe, CNN or my own lying eyes?

Oh.
They don’t like it when I call them a “mob”.
Guess what’s going to be their official name from now on.

Per the CNN dictionary: A group of peaceful protestors.

Dems got caught acting unhinged and now they’re trying to bullshit us that we didn’t see it. This reminds me of an unfaithful boyfriend who just got caught cheating but YOU’RE the crazy one.

Somehow I don’t think the Shaggy defense is going to work for them this time.

A kangaroo, upset about the direction of the country, is still a kangaroo.

And when you have more than one kangaroo you have… a mob.

Precisely! Good on you for that one.

It has become critical for the liberal media to eliminate the term “mob” when speaking of groups of people, who represent liberal/progressive causes, who also attack people and disrupt society. See, the common association with the term “mob” is that a mob is undisciplined, unauthorized and dangerous to others. I(f a person is approached and threatened by a group who is just engaging in enthusiastic conversation on an issue, one would be hard pressed to claim that they were in fear of their life or of the infliction of great bodily harm. However, if they identify this group of people as a MOB, then others are far more likely to believe that this group of individuals, who are misbehaving or are over-enthusiastic in their debate techniques, are bona fide threats to others. There are very real, tactical reasons for no calling a mob a mob.

Apparently, Herschel Walker and Jim Brown are “tag-teaming” it on Twitter

Of course it’s not a mob — these people are paid to do this. It’s theater. Bloody theater, with real injuries and real property damage.

DemoCRAPS have proven, time and time again, they ARE the enemy of OUR Nation and Americans. They are Pathological Liars, encourage Violence and Destruction of Property. Remember this when you vote in November. They MUST be removed from public office !!!!!

Perhaps they would prefer something more truthful,Marxist terrorists on a rampage.