Law of Self Defense: A Merely Speculative Fear is Inadequate to Justify Use-of-Force

Law of Self Defense: A Merely Speculative Fear is Inadequate to Justify Use-of-Force

“Well, for all I knew he COULD have had a gun” simply won’t cut it in court 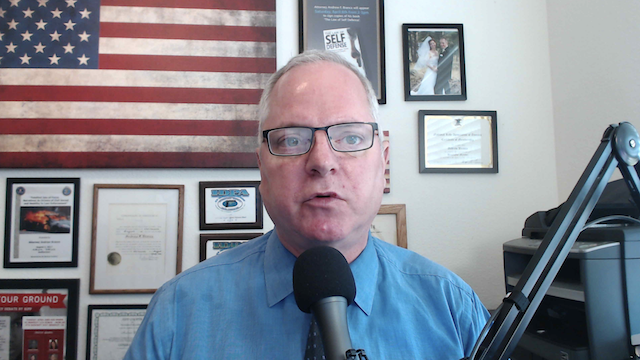 The exchange escalated into a lengthy verbal dispute, with the Defendant throwing disparaging remarks at the Victim’s lady friends, the Victim threatening to call the police, and both parties challenging the other to come upstairs or downstairs to settle matters, depending on their locations.

Bringing A Machete to a Mere Words Fight

The Victim decided to walk up to the Defendant’s apartment, and when he was a few steps short of the upper landing, the Defendant, standing on that landing, cut the Victim in the shoulder with a machete. The Victim would survive and testify at the Defendant’s trial. The Defendant would ultimately be convicted of assault with a deadly weapon, and would appeal that conviction on several grounds.

A Merely Speculative Threat is not an Actionable Threat

Clearly, cutting somebody with a machete constitutes a use of deadly force, which under California law can only be justified by a deadly force threat.

Importantly, the threat being defended against can’t be merely speculative. Too often I hear folks discussing a self-defense scenario and concluding to the effect of, “Well, I’d use deadly force against that guy, because for all I know he has a gun, for all I know he has a knife.” In other words, the other person’s possession of a gun or knife is not based on evidence. It’s speculation or imagination.

Narrative of Self-Defense Must be Evidence-Based

This, however, will not fly in court. At trial, every legal argument must be based on some evidentiary foundation, and every decision made in self-defense must also be based on some evidentiary foundation in order for that decision to be objectively reasonable (a mandatory requirement for a use-of-force to be lawful). A hypothetical or imagined or speculative threat will never be sufficient to justify force, and especially not deadly force.

Evidence in the Light Most Favorable to the Defendant

Unfortunately for the Defendant, the threat against which he defended himself is entirely speculative. The appellate court recites the evidence from trial on this issue as follows:

Defendant worried the victim could hurt him and might kill him. The victim was bigger than defendant and was wearing pants with pockets that puffed out, like he might have had a pistol holder in his front pocket. Defendant thought he might have a gun. … The victim did not speak as he approached. Defendant hit the victim with the machete when the victim was still on the stairs and within reach because he feared for his life, and it looked like the victim had a pistol in his pocket. … [The Defendant] never saw a gun, but did see an abnormal bulge that did not wrinkle, which he suspected was a gun.

Subjective Fear? Sure. Objectively Reasonable Fear? Not So Much

There’s probably little doubt that the Defendant here had a genuine, subjective fear of a deadly attack … but where’s the objective reasonableness? Where’s the evidence, from which a reasonable inference of a deadly force attack could be made?

This is a classic example of a case with no evidence capable of reasonably inferring a deadly force threat, even when that evidence is looked at in the light most favorable to the Defendant.

“Well, for all I know he could have a gun, he could have a knife,” is never going to be the basis for a lawful use of deadly defensive force. You need to be able to articulate an evidence-based rationale for why your inference of a gun or knife or other deadly threat was a reasonable inference under the circumstances. If your subjective belief, however genuine and held in good faith, is evidence free, it’s worthless in a court of law.

The Defendant’s conviction was affirmed.

In next week’s Case of the Week we’ll address the provocation with intent issues of this case.

To read this decision in its entirety, simply click here: People v. Gregory.

California, Law of Self Defense

Just imagine if this was decided in favor of the defendant – with the justification he claimed, anyone could stab anyone else at any time as long as they said that they believed the other person had a gun.

That’s like saying “I thought he was going to hit me so I hit him back first.”

Our criminal justice system is a marvelous thing.

here we have two men yelling insults at each other and challenging each other to what is essentially a duel. when on man arrives, at the other man’s home, essentially unarmed, the second man, who has armed himself with a machete, a deadly weapon, attacks the first. Now, as this takes place in an urban apartment building it can be reasonably assumed that carrying a machete, especially in one’s hand, would not be a common occurrence. Also, as the second man made no attempt to remove himself from the situation, which he could easily do by simply stepping into his apartment and closing the door, a case could be made that the second man was not in any significant way in fear of the first. So, a reasonable case could be made that the second man actually intended to cause the first great bodily harm or even to kill him. Yet, our criminal justice system gives the second man the benefit of the doubt that he was acting in self defense though operating under a mistaken understanding of what constitutes self defense.

Is this a wonderful country, or what?

Why, if that is the case, would the police officer be OK to use deadly force when said officer thought it could have been his life was in danger, when a citizen faced with a similar circumstance is guilty?

An untrained person would be less likely to make the correct judgement, so instead they should be open to bodily harm or even losing their life, because they are untrained, so should be required to show more restraint until it would be too late? Sure, the person coming up the stairs to the defender’s apartment did not have a weapon, how is one to know that unless threatened fully, and by which time it would be too late? That doesn’t sound very just to me either. What would the intent be of coming up stairs? To invite the sod to join them? I tend to doubt that. It also seems that being the person coming up the stairs, upon seeing the machete, would beat a hasty retreat. Did he do so? If he turned and was heading down the stairs, and was struck, then the machete wielder is in the wrong. If the stair climber kept coming up, then it is reasonable to assume he is better able to defend himself over a machete.

Of course, both people are in the wrong with particular case, but it seems there are some factors left out which should sway some judgement.

No, a policeman would not be able to claim self-defense here, any more than anyone else.

Now if he’d claimed to have seen the victim reach into his pocket in a manner suggesting that he was reaching for a weapon, both this defendant and a policeman could claim self-defense, and most (but not all) juries would be more likely to believe the cop’s word than this defendant’s. But no such claim was made here.

Md. Branca has gone over what elements are required in order to use deadly force to defend yourself.

1) You have to reasonably believe that an attack, upon your person is imminent. In this case, the man with the machete MIGHT reasonably believe that the other man was about to attack him, based upon challenges exchanged between the two. But, as the other man had taken no action which clearly indicated that such an attack was imminent, use of any force by the man with the machete would be legally questionable.

2) To use deadly force, you must be reasonably likely to suffer great bodily harm or death from the attack. In this case, there is no evidence that any such reasonable fear existed, as the man from downstairs was not obviously armed.

Now, though the man with the machete made a valiant effort to justify his action by saying that he feared that a bulging pocket MIGHT contain a gun, he falls far short. First, he did not describe the “bulge” as being distinctly firearm or even deadly weapon shaped. Second, the man from downstairs made no movement toward the pocket nor any attempt to withdraw anything from the pocket. So, there was no obvious deadly force threat at the time he hit the other man with the machete.

Some years ago, I got a late night visitor who claimed to be a private investigator seeking the previous owner. As usual at that time of night, I answered the door with my handgun in my right hand, concealed by the doorjamb. During our conversation he suddenly reached behind his back with his right hand. I’m not a hasty person, so I didn’t bring down my gun and blow him back into my driveway – as he produced his business card – although, in my understanding of Texas law, I could have.

Even in Texas, you would not have been justified in shooting the man, simply because he was at your door late at night and reached behind his back. You would have to be ablke to show that you reasonably believed that the man was armed AND that he intended to attack you with a deadly weapon.

“”You would have to be ablke to show that you reasonably believed that the man was armed AND that he intended to attack you with a deadly weapon.””

Would it have made a difference if the victim actually had a pistol or knife or some other weapon?

No. The only relevant issue is whether the defendant had reason to suppose he had one, and was about to use it on him.

Keeping or bearing arms are generally not evidence of criminal, or even violent, intent.

Brandishing arms (in some states, even if only verbally rather than physically) could reasonably be seen as evidence of violent intent, and that might justify some sort of violent self defense. But nobody has claimed that happened here.

They consented to fight by verbally inviting each other. So the man with the machete loses all claim to innocence right there. Game over. Even if the injured man was armed, machete man would be culpable.

One of the best self-defense tactics is to not go to places where there may be trouble.

I am not an attorney. But it seems to me that if the Defendant did indeed issue a challenge to come up to settle the dispute, then the Defendant was not in fear for his life from the mere appearance of the victim. I also note there were an awful loit of witnesses, all friends of the Victim.