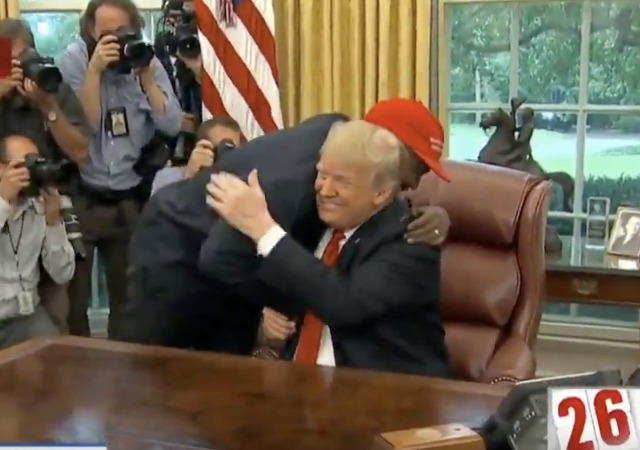 We covered a bit of the meeting between President Donald Trump and rapper Kanye West at the Oval Office, as they were surrounded by press. Our initial report focused on West’s experience with the MAGA hat.

But the meeting contained so much more that could be consequential. West used the highly public venue to preach the value of Trump’s “Make America Great Again” approach, excoriate the Democrats, and persuade the president to reconsider implementing “stop and frisk” in Chicago.

The mainstream media is in an uproar over what they saw. For example, the pundits at CNN deemed the event “surreal”, as they engaged in mind-reading and projection to diminish the impact of West’s 10-minute speech on the African-American community. MSNBC had one analyst who referred to the meeting as a “blitzkrieg of blistering ignorance”.

Quite frankly, the only ignorance on display is from those “journalists” who failed to see that this was a skilled negotiation using the power of positive persuasion by a master of creativity, West, who was facing a master negotiator, Trump. I suspect that many of the regular Americans who have seen the video on social media, especially those in the minority communities, will reject the elitist, hostile, and nonsensical assertions about West’s dialogue.

I would like to review a few moments that stuck me. First of all, there was the direct aim at the Democrats, who act as if they are automatically entitled to the black vote.

You know, people expect that if you’re black you have to be Democrat. I have conversations that basically said that welfare is the reason why a lot of black people end up being Democrat they say – you know first of all, it’s a limit to amount of jobs, so the fathers lose the job and they say, ‘We’ll give you more money for having more kids in your home.’

I would argue that with those words, West became the new civil rights leader for our era. And, because his focus is on jobs and self-empowerment, West will be successful where the Al Sharpton, Jesse Jackson, Maxine Waters, and all the rest have failed.

West proved to be more of an expert on the US Constitution than the previous occupant of the Oval Office, too.

#Kanye couldn’t have said it better: Illegal guns are the problem, and we have the right to bear arms. The #NRA’s nearly six million members are glad to see a celebrity who gets it, and who is willing to stand with the #2A. @realDonaldTrump pic.twitter.com/RJffxucAM5

Finally, West was able to bring up an area of disagreement with the President.

The rapper also spoke against stop-and-frisk policing policies, which Trump recently expressed support for, especially in the city of Chicago. Trump said he was open to other ideas after West expressed reluctance on the policy.

“We feel that stop and frisk does not help with the relationship in the city and everyone knew I was coming here said, ‘ask about stop and frisk,’” West said.

It appears that West is focused on making Chicago a better place to live, and he has a track record of success and innovative ideas. The fact that this was was a negotiation to bring a new approach to the war-zone that is “Chiraq” was obviously lost on the mainstream media.

Additionally, West used positivity to try and improve race relations and perhaps mediate a peace accord between Trump and football player Colin Kaepernick, whose taking a knee during the national anthem has caused cultural turmoil.

Many African-Americans are responding the the professional pudit’s take on the West-Trump meeting with anger.

Went to bed appalled over @donlemon despicable behavior laughing at @TaraSetmayer and @Bakari_Sellers awful remarks about Kanye West’s visit with @realDonaldTrump!! Woke up wondering why @CNN doesn’t take all three off the air?#SHAMEFUL #CNN https://t.co/MwGWIfh8so

“[West is] an attention whore, like the president…He’s the token Negro of the Trump administration.”
–Tara Setmeyer, (black) CNN analyst

But Trump’s an anti-black “RACIST”?

Others are mocking the analysis outright.

MSNBC host said the Kanye and Trump meeting was an assault on the White House.

Can someone please explain what they mean? I’m losthttps://t.co/PmSo7HptBD pic.twitter.com/osYvofLLoj

I anticipate that this will be one of the most consequential meetings of Trump’s two terms. West’s dialog indicate the rapper may be the best civil rights leader for our time. so if you haven’t seen the video, check it out!

Bruce Jenner must be rubbing off on him (no pun intended).

West seems scattershot because he’s got what Buddhists call a heart-monkey-mind. Yeah, no one dare say that in print, especially bloggers and lawyers.

The Buddha used this analogy in several sutras to describe how our human mind swings from thought to thought, or from object to object throughout the day, rarely resting in the present moment or in wholesome thoughts. The Buddha coined the term ‘kapacitta’ to describe this restless, agitated, incessant movement of the mind. He said, “Just as a spaien swinging through the trees grabs one branch and lets it go to seize another, so too, that which is called thought, mind or consciousness arises and disappears continually both day and night.”

At first, this metaphor may sound like fun, but we need to examine our own experience. Scientists estimate that the average person has around 70,000 thoughts per day, which explains where the sense of constant chatter comes from. We like to think that we are independent and in control of ourselves, and to some degree we are. But anyone who has tried to meditate for even five minutes comes to recognize the constant movement of the untrained mind. Many of our thoughts are repetitious and based on hopes and fears and the daily stresses of our lives. Such unruly thoughts often lead to further anxiety, fear, worry and other unproductive emotions.

The Buddha was a wise psychologist, and taught people about the mind—its nature, how it functions, how to make it serviceable—so we could understand ourselves better. He compassionately taught his followers how to meditate in order to tame the “monkey mind.” As we all know, it’s a vain attempt to fight with monkeys or to try to stop them cold. We can capitalize on the fact that we do have some degree of control over our mind. If we spend some time each day in quiet meditation—slowly doing a body scan, engaging in breathing meditation or quietly reciting mantra—in time the mind will grow more peaceful, more wise and kind, and more useful to us.

I’d just like him to finish a thought – before that one thought gets washed away – in an undertow of more chatter.

I know a lot of people get turned off to some of this Buddhist stuff because leftist-new-age grifters/scammers/charismatics hijacked the philosophical aspects of eastern spirituality.

Who ever thought it

I remember Trump getting up on stage during the primary’s and showing all the things he sales, like steaks, ties, water, it was hilarious. PT Barnum and Bailey all the way

Trump, West, and Kaepernick standing in the middle of a football stadium wearing MAGA hats would likely move the needle to Trump getting a majority of black support in 2020. That would translate as a Nixon/Reagan-level landslide. Would that support translate to other Republicans candidate down ballot – I don’t know?

Kaepernick is a dummy. A mere follower – of his girlfriend, no less.

whether you buy what he’s saying or not, the fact that many liberals of every stripe went berserk as a result of the meeting is more than worth the watch

Kanye West and Jim Brown belong to the Black working class. West works for a living and he works hard. What he sees when looks at the Black community of the last 15 years, is a place where there is limited opportunity for Blacks to find work. He sees social programs which have almost eliminated the Black nuclear family. He sees a landscape where reluctance to police the community has resulted in a horrible deterioration in safety and security. Then he looks at what has happened since trump took office. He sees that MAGA has significantly increased the jobs available for Black Americans. He sees that increased employment will likely lead to a reduction in social support programs which will revive the Black nuclear family. He sees a push, by federal authorities, to force local authorities to enforce existing laws which will increase safety and security in minority neighborhoods. And, Kanye West is NOT a policy wonk working for the government, a political party or a groups supporting government activities. He is an artist, performer and entrepreneur.

He is so dangerous to the Establishment in general and the Dems in particular because if large numbers of Black Americans stop and take a good hard look around them, then they might just follow his example. That would destroy the Dems, who have spent the last 55 years buying the Black vote.

Jim Brown was no slouch, either.

Maxine Waters and Maxine Obama must be crapping in their adult diapers.

I see your Taylor Swift, and raise you a Kanye West.