Initial reports said it was a bomb. 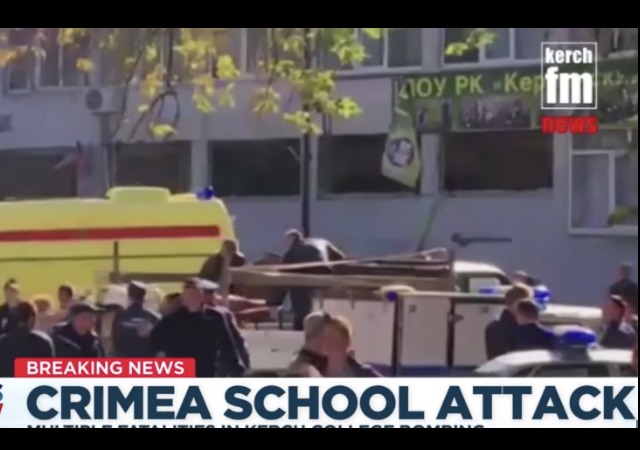 A Russian official has explained that a student gunman killed 17 people and wounded 40 others at the Kerch Polytechnic College in Kerch, Crimea, after initial reports said it was a gas explosion. From The Associated Press:

The comments from Sergei Aksyonov, the regional leader in Crimea, were the latest in a series of shifting explanations by Russian officials as to what exactly happened at Kerch Polytechnic College in the Black Sea city of Kerch.

Russian officials at first reported a gas explosion, then said an explosive device ripped through the college canteen in a suspected terrorist attack. But witnesses reported that at least some victims were killed in an attack by a gunman or gunmen.

Aksyonov said on television that the student, a local man acting alone, killed himself after the attack.

Russia’s Investigative Committee, the nation’s top investigative agency, identified the attacker as Vladislav Roslyakov, 18. It said he was caught on security cameras entering the college with a rifle and firing at students.

The committee said all the victims died of gunshot wounds, contrasting with the previous statements by other officials saying they were injured in an explosion.

Reflecting the official confusion, Russian President Vladimir Putin said the victims were killed by an explosion just as the Investigative Committee was announcing they were fatally shot.

Putin deplored the attack as a “tragic event” and offered condolences to the victims’ families at a news conference in Sochi, where he had talks with Egyptian President Abdel-Fattah el-Sissi.

After the attack, local officials declared a state of emergency on the Black Sea peninsula that they had annexed from Ukraine in 2014. They also beefed up security at a new 19-kilometer (11.8-mile) bridge that links the peninsula with Russia that opened earlier this year.

Military units were deployed around the college.