Attacker set a 14-year-girl on fire 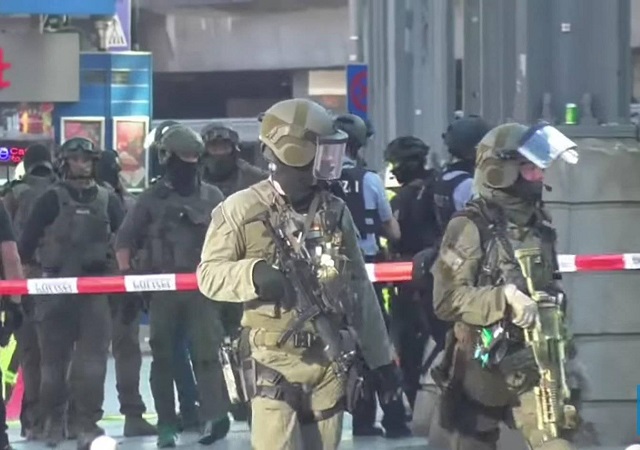 German police are carrying out raids in connection with yesterday’s attack at a Cologne central train station.

On Monday afternoon, Special Forces stormed the station compound after an Arabic-speaking man, claiming allegiance to the Islamic State, set fire to a 14-year-old girl and took another woman hostage.

The attacker tied gas canisters around the hostage and threatened to blow her up, forcing the Special Forces to move in. The suspect, identified as a Syrian asylum seeker, sustained several gunshot wounds during the rescue operation.

“Authorities believe with ‘high probability’ that the suspect is a Syrian man with a German residency visa,” German public broadcaster Deutsche Welle reported, adding that witnesses “reportedly described the man as professing allegiance to the ‘Islamic State’ militant group while committing the attack.”

German magazine Focus was among the first to report the identity of the attacker:

He uttered his threats in Arabic. The hostage-taker left no room for doubt regarding his intentions. Apparently, he wanted to send out a message. Initially the man, whom police refused to name until late afternoon, set the shoes and legs of a 14-year-old girl on fire with a Molotov Cocktail inside a McDonald’s restaurant. This set off water sprinklers in the restaurant, according to the statement of the police at a press conference.

Subsequently, the perpetrator — apparently armed with a firearm — entered a pharmacy located on the other side and took a female hostage. The man tied several gas cartridges around the woman. Police found a residency permit [equivalent of a U.S. green card] issued by the city of Cologne belonging to a 55-year-old Syrian man with prior criminal record. It was not conclusively confirmed that the document belonged to the attacker, police said. The holder of the permit is known to have been involved in several criminal offences since 2016, including theft and intimidation. [Translation by the author]

Two years ago, Cologne central station grabbed international headlines when thousands of migrants raped and assaulted some 1,200 women on the New Year’s Eve. So far the majority of the perpetrators involved in that incident have not been brought to justice.

If the initial media reports about the identity of the attacker are confirmed, this would be yet another case of a recent migrant engaging in terrorist activity. Since Chancellor Angela Merkel opened the floodgates of Europe to millions of Arab and Muslim migrants in the autumn of 2015, Germany has been hit by a string of terror attacks committed by migrants.

In the wake of Merkel’s open borders policy, German prison system is struggling to cope with the rising number of Islamist inmates. According to official German sources, the country is home to more than 10,000 foreign and “home-grown” jihadis. Islamic terrorism now poses a “serious challenge to the free and tolerant coexistence” in Germany, the 2018 annual report of the German spy agency BfV claimed.

sadly, so do many others.

In the U.S., the media would be wringing its collective hands wondering if we’ll ever be able to find out the attacker’s motive.

That’s it. How silly of me to miss the obvious.

Interesting to see that the German police run away when there are innocent human lives at stake. Is that part of their training?

I don’t believe most of those reasons are at all valid, but when Muslims see several dozen heavily armed police officers fleeing the scene of a hostage situation om what sure looked like panic that all on its own will convince them that Europe is a dying continent, that they can just walk in and take over and encourage more violence.

“The holder of the permit is known to have been involved in several criminal offences since 2016, including theft and intimidation.”

Should have been deported immediately upon being convicted. As a refugee you need to be on your best behavior. If you cannot manage that then your host country has no use for you.

don’t speak german but from the video only, appears that the cops are falling back not running away–the cops appear to have ballistic vests only–insufficient protection for explosive ordinance–also, the entire front of the building would appear to be glass–very high probability lethal fragments/shards/projectiles as a result of an explosion–better not to lose 15 or 20 patrol folks and fall back, hand off to the special ops folks–apparently the right decision

Did the cops get their training in Florida?

A more interesting question than you think. Broward Deputy Sheriff Israel had some very strong ties to the Muslim Brotherhood, CAIR and Hamas. His Deputy Sheriff is the leader of the Broward County CAIR division. I know this probably sounds very out there, but it’s true. Here’s a link to Frontpage Magazine, “CAIR Leader Newark Hamze is Now Deputy Sheriff.” Interestingly, Hamze seemed to spend a lot of time teaching the men at his mosque how to use guns, but didn’t spend a second teaching those students or teachers to defend themselves: