First Woman Chosen to Lead Largest Command in the Army

First Woman Chosen to Lead Largest Command in the Army 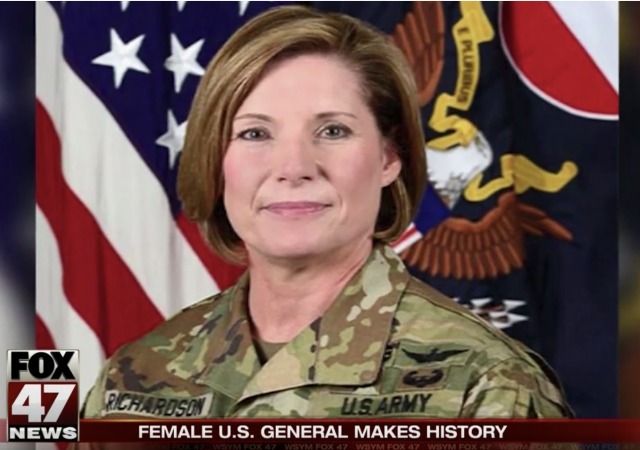 Lt. Gen. Laura J. Richardson will become the first woman ever to lead the US Army Forces Command (FORSCOM), which is the largest command in the Army. It represents 776,000 soldiers and 96,000 civilians. From CNN:

She has been with the US Army since 1986, and in 2012 she became the first female deputy commanding general for the 1st Cavalry Division, known as “America’s First Team.”

In 2017, she became second in command to Gen. Robert B. Abrams, when she was named the first female deputy commanding general of FORSCOM in Fort Bragg, North Carolina, the US Army reported.

Now, Richardson will become the first female commanding general of the US Army FORSCOM as Abrams steps down from his post, reported CNN affiliate WTVD.

On Tuesday, Abrams announced he would be leaving his post to become commander of United States Armed Forces Korea. The farewell message was tweeted by FORSCOM.

“It has been an honor to serve these last three years as the commanding general, US Army Forces Command,” Abrams’ message read.

Abrams also thanked FORSCOM soldiers for their work, as it increases “readiness of our Army across all three components — regular Army, Army National Guard and US Army Reserve.”

Richardson will serve as acting commander until a replacement for Abrams is named and confirmed to the rank of four-star general by the Senate.

“She will continue to be the deputy commander as well as the acting commander during this interim period,” FORSCOM Director of Public Affairs Colonel Michael Lawhorn told CNN. “LTG Richardson is one of a number of highly qualified officers that are being considered as potential commanders for the Army’s largest command.”

What could possibly go wrong? I’m sure she is a trained killer.

“Acting Jack” we called it back in the day: a title only.

Booooooo. Women have no place in combat. Their inclusion in combat forces weakens the service.

FORSCOM is not a fighting force: it ought to be called “REMFS ‘r Us”

Why is this good news?

because they *didn’t* give her a combat command and now all the lesbians will want to transfer to FORSCOM?

or were you asking a serious question?

if so, see above.