“the right of others to have their religious feelings protected” 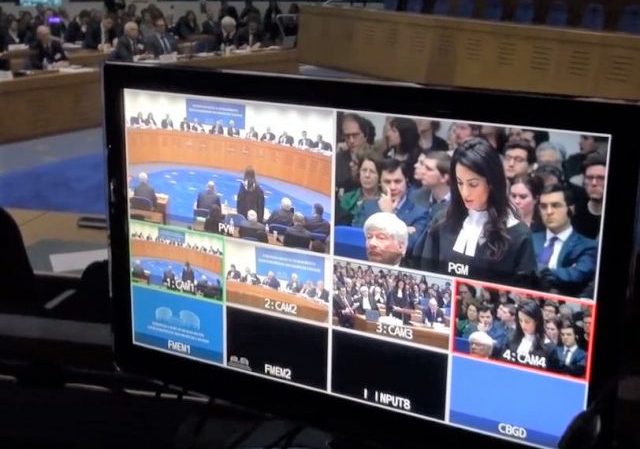 In 2009, an Austrian woman conducting a seminar on Islam argued that Muhammad’s marriage to a six year old girl meant he was a pedophile. She was convicted for this by an Austrian court, and now the European Court of Human Rights agrees.

We certainly have free speech issues in the United States, but nothing this surreal. Yet.

Is there anything more Orwellian than a Court of Human Rights ruling against free speech? https://t.co/3jxfzxfYAB

Calling Prophet Muhammad a pedophile does not fall within freedom of speech: European court

An Austrian woman’s conviction for calling the Prophet Muhammad a pedophile did not violate her freedom of speech, the European Court of Human Rights ruled Thursday.

The Strasbourg-based ECHR ruled that Austrian courts carefully balanced the applicant’s “right to freedom of expression with the right of others to have their religious feelings protected, and served the legitimate aim of preserving religious peace in Austria.”

The woman in 2009 held two seminars entitled “Basic Information on Islam,” during which she likened Muhammad’s marriage to a six-year-old girl, Aisha, to pedophilia.

The marriage according to Islamic tradition was consummated when Aisha was nine and Muhammad was around 50. Aisha was the daughter of Muhammad’s best friend and the first caliph, Abu Bakr.

The court cited the Austrian women stating during the seminar that Muhammad “liked to do it with children” and “… A 56-year-old and a six-year-old? … What do we call it, if it is not pedophilia?”

Here is why free speech is so worth defending, and why it is so particularly important in the USA. In Europe, they just upheld laws prohibiting the criticism of religion or religious figures. It's mind-boggling. https://t.co/W2LlvTSCZP 1/

Do the judges know their own philosophical heritage? Did they bypass the Enlightenment altogether? These are the sort of people who gave us witch-burning centuries ago. 3/

If you want to read the full decision (it's short), you can find it here: https://t.co/JG2YaqPgzE pic.twitter.com/KAzi1ei4gJ

Jim Treacher wrote about this at PJ Media on Friday and noted its chilling nature:

In 2018 Europe, you can’t say that Mohammed was a pedophile or the law will come after you. Punishing you for insulting a man who’s been dead for 1,400 years isn’t a violation of your human rights, because you’ve offended a protected class. You’ve pissed off the wrong people, and now you’ll pay.

Will all faiths in Europe enjoy this new standard of having their religious feelings protected?
‏
And is that really the world the people of Europe want to live in?

When Europe consolidated into the EU I saw things like this coming. An unelected body making decisions affecting sovereign nations and their citizens was doomed to be tyrannical. This is a historical fact. And the hypocrisy of calling themselves a human rights council is ironic.

When women are allowed to vote, feelings will trump rights.

This is frightening. Europe is committing suicide.

I have long thought that the laws prohibiting Holocaust denial would lead to dangerous results, and here we have it. If you begin by prohibiting some opinions, no matter how ill-informed or offensive, you’ll end up prohibiting other opinions according to the latest trend. Simply put, this court has ruled that if anyone criticizes Islam, there might be violence, so people should just shut up.

On the topic, it was common in medieval times for girls to be contracted in marriage at a very young age, but highly unusual for the marriage to be formalized and consummated before first menses. In times when life was often short, girls in their early to mid teens were often married and mothers themselves. Commencing sexual relations with a girl at least four or five years before puberty was not the rule, even in those times. It is now, in strict Islamic countries, because if Muhammad did it, it cannot be condemned.

Essentially the EU has enacted blasphemy laws and they are enforcing them. The free world has fallen.

Just as in America, there are enemies external to us and also enemies internal. The traitors must be purged before victory can be achieved.

Anyone who supports blasphemy laws is an enemy of the West, and should be treated accordingly.

So now in Europe there is a “right” to not have your feelings hurt? Well EU, welcome to the first step in becoming a 3rd world toilet!

It is time that EVERY single Jewish and Christian leader legally file charges to go after EVERY single Islamic Imam or religious leader that goes forth and insults a Jew or a Christian for being a dog, or being unclean, or otherwise tarnishes their religious heritage.

It is TIME to make the cowerdly leftists LIVE by the rules they impose. FILE THE CHARGES, OVERWHELM THE SYSTEM, and make them justify WHY there are two sets of rules. The more contradictory opinions that exist, the more people will realize that there is no consistency, and the populace WILL revolt.

It’s time for another Revolution in Europe. The dried tinder of it are already there. It just needs a match. And WHEN it occurs (not if, WHEN) the United States needs to stay out of it and let the warring populations kill each other until one wins.

Some of the abuse aimed at Christians and Jews in Islam is in the foundational documents, the Qur’an and ahadith. Under the strict application of this stupid legal ruling, publication of or preaching about those documents should be prohibited. That won’t happen, of course, because there would be riots.

That’s entirely the point. File the charges, and when the authorities refuse to act, point to this decision, and call them out on their hypocrisy.

Day-in and day-out, HOUND them about the double standard that because there’s a violent, vocal group of small-minded thugs that can’t deal with their leader’s personal history that those same “leaders” would rather placate the violent, rather than enforce the law in a neutral manner that actually RESPECTS the right to free expression.

Remind them in EVERY public interaction of their cowardice in dealing with an invading religion that wants nothing less than the destruction of Western thought and personal liberty that their forebears fought and DIED for, and remind them how little they personally have had to sacrifice for the benefit they’ve received.

It’s an observation that is not politically congruent in today’s climate.

I am wondering if she had not said “pedophile”, but just let the facts speak for themselves, if it would have ever come to this.
Still, quite dangerous!

There is only one G-D, and He IS the G-D of Abraham, Isaac and Jacob….

He sent Jesus into the world to reconcile mankind back to G-D.

There is no other way to enter His presence.

This is the foundation of Christianity and this is denied by islam. Instead they lift up a mortal man who himself did not confess Christ and who cannot cleanse you from sin.

Christ is to be defended, and only Christ.

And is that really the world the people of Europe want to live in?

Well, it’s the world they’ve made, and the world in which they remain.

Those unwilling to accept that sort of smothering control left long ago. That’s why there’s a United States of America.

However, the European submission to the outrages of Islam is not confined to the Old World. In fact, only a few years ago CAIR and similar Muslim activists routinely pushed the line that “free speech” in America meant that they didn’t have to hear anyone criticizing the Prophet—an amazing intellectual perversion of a straightforward concept. It seems to have gone out of fashion lately, perhaps subsumed by the more general Progressive mania about anything it defines as “hate speech”.

All speech much be protected, or everything is in danger of extinction.

Stop me if you have heard this before.
Mohamed comes home from work and finds his wife has locked herself in the bathroom.

“What’s the matter?”, asked Mohammed.
“I just found out you are a pedophile.” his wife replied.
“Pedophile! Wow that’s a really big word for a 12 year old.” said Mohammed.

I government that cannot or will not protect the rights of its citizens is illegitimate, and deserves to be overthrown.

I don’t live in Europe. I spent a month there once, visiting. I don’t plan on ever going back. So, I’d say c’est la vie, suckers citizens of the EU.

You broke it, you pay for it.

Just insane. This is where all other religions need to file complaint after complaint against any person of the Islamic faith who says anything bad about another religion.

I’m not a fan of Saul Alinsky but I’m a big believer in his rule number 4.

Rule 4: “Make the enemy live up to its own book of rules.”

In a few years the UNHRC will rule that muslims can kill infidels on the grounds of religious freedom.

Not likely, but if that happens the very next day the New Caliphate will be declared and Europe as we have known it will cease to exist. It is close to that now, Europe having spent last several years committing cultural suicide.

Jews are leaving Europe in droves:

It seems that many European Jews really do remember history, and have determined that moving to a Holocaust-free area is in their best interests.

Well, if they come here and then vote for Democrats, they won’t have accomplished much.

America’s the Land of Opportunity—and for some, that means the opportunity to throw it all away.

Now they can shut up people like Geert Wilders and Pat Condell.

Perhaps I am tilting at windmills but, perhaps with this decision the EU can start locking up all those who spew anti-semitic rants. It only follows as logical if they are truely applying their ruling on an equal basis. Okay who am I kidding?

Does this ruling only apply to Muhammad or will it be expanded to people like Churchill, Roosevelt, Ghandi, Lincoln, Stalin, Mussolini, Hitler,and on down the line? Oh, it ends with Muhammad. Guess who is coming to dinner.

In a rational legal system, truth is an absolute defense against a claim of defamation.

Although you might have difficulty proving that Mohammad consummated a marriage with a nine-year-old girl, the claim is obviously part of Islamic tradition.

In any case, one wonders what the restrictions must be on what scholars may write on the history of Islam, if truth is held to be a less than sufficient defense against claims of defamation.