The radio station is home to CONSERVATIVE radio shows. 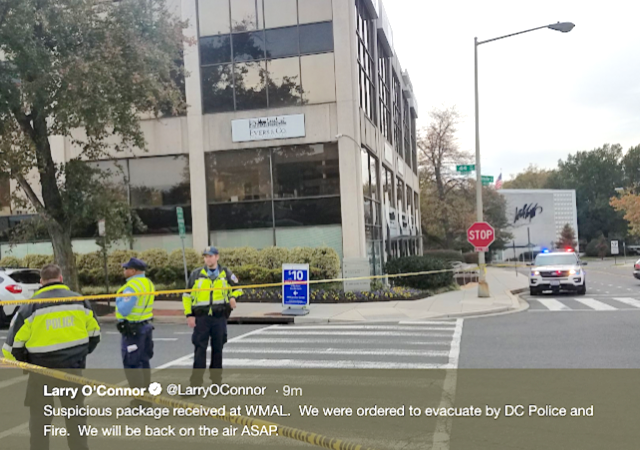 *This is a BREAKING story. Will provide updates…

At about 5:30PM ET, Larry O’Connor tweeted that the station received the all clear and they returned to the air.

We still do not have any new information.

Suspicious package received at WMAL. Building evacuated. Police and fire are on scene. We’ll be back with you live as soon as we can, but for now enjoy our “Best of” programming on WMAL.

I saw the package mailed to @WMALDC.

Though it does not look like the other packages we have seen the past day or two, there were some similarities. DC police examined it and immediately ordered full evacuation.

Suspicious package received at WMAL. We were ordered to evacuate by DC Police and Fire. We will be back on the air ASAP. pic.twitter.com/l58Ef1CdVT

I’m not going to describe the package in question because there is an ongoing investigation. We were informed moments after police studied it to immediately evacuate.

Could be a bad copy cat or could be something more.

We will return to the air as soon as we can. @WMALDC

Looks like WMAL got the all clear and are back on the air live.

Heard Levin on the radio. He said apparently a listener sent in a chunk of the Berlin Wall as a memento to the radio hosts.

Still early, Levin himself could have been mis-informed.