“He will be getting a pitchfork in the ass from the devil now.” 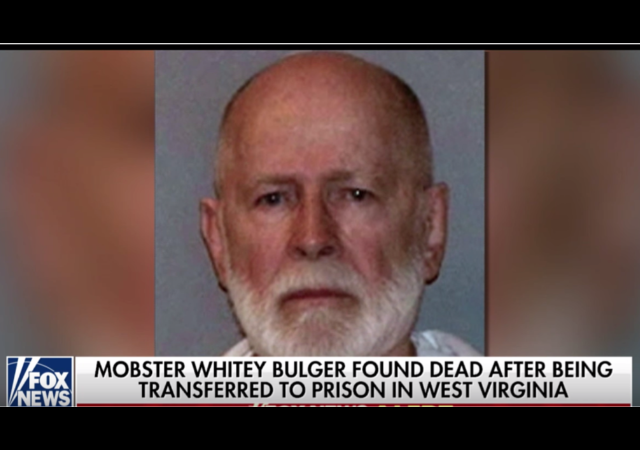 Boston mob boss James ‘Whitey’ Bulger, the man who inspired The Departed, was murdered this morning after he arrived at a West Virginia federal prison. From The Boston Herald:

Bulger, 89, was convicted in 2013 of being complicit in 11 murders in Massachusetts, Florida and Oklahoma.

His attorney, Hank Brennan, who tried to appeal Bulger’s life sentence all the way to the U.S. Supreme Court, declined comment pending notification by the Bureau of Prisons.

Bulger arrived at USP Hazelton yesterday. He was found unresponsive at 8:20 this morning, according to a statement from the Bureau of Prisons, which provided no other details.

BOP notified the FBI and Bulger’s death is now under investigation,

“No staff or inmates were injured, and at no time was the public in danger,” BOP stressed.

The facility houses 1,277 maximum-security inmates and is located in Bruceton Mills.

The Herald reported last week he had been relocated from a penitentiary in Florida to one in Oklahoma, which often serves as a temporary stop for inmates in transit.

Family members of Bulger’s victims did not hold back:

Mary Callahan, whose husband John was killed by the Bulger gang in 1982, said today Whitey hurt everyone he came in contact with.

“My memory of him is anybody, good or bad, who had anything to do with him got hurt,” said Mary Callahan. “Good people and bad people were hurt by him.

“But he’s a legend, like Al Capone and Billy the Kid. He will always be remembered but in a bad way,” the widow added. “I was expecting his death, but not like this.”

Tommy Donahue, whose dad Michael was one of Bulger’s victims, said his family can “finally” put Whitey behind them.

“He will be getting a pitchfork in the ass from the devil now,” said Donahue. “His (expletive) legacy is gone. We can finally put him behind us.”

Assuming anyone in the FBI can conduct a valid investigation involving Mr. Bolger, they need to ask the question : “Who the HELL made the decision to put him in with the general population?”.

“And how much did their bank account grow recently?”

Considering how many FBI agents were complicit with his crimes – and how many from the Boston office (cough -Mueller- cough) who SHOULD have known pled ignorance/incompetence when it came to tracking interaction with this high-profile “informant”, perhaps this is one instance where US Marshals should be given jurisdiction, rather than the FBI or Corrections Officers?

Finally, somebody took out “The Trash.” My only surprise is that given all those who he harmed, both inside and outside of the organized crime arenas, he lasted this long.

I just wonder if he had anything on Bob Mueller who was working as the U.S. Attorney in Boston at the time Bulger was at the height of his career; if somebody called in a favor to affirm that “Dead men tell no tales.”

“Robert Mueller’s past appears to be even more checkered than Comey’s. In her blog post for March 20, investigative reporter Sarah Carter brings up nagging questions about Robert Mueller’s troubled history that refuse to go away — because they have never been answered. Entitled, “Questions Still Surround Robert Mueller’s Boston Past,” the article deals with Mueller’s involvement in what is usually referred to as “The Whitey Bulger Case” or “The FBI-Boston Mob Case,” one of the most sensational black eyes the FBI has ever suffered.”

What goes around comes back around. The world is better off without murderers like him hanging around draining society.