Yes, bash Israel and Jews during a Holocaust film. 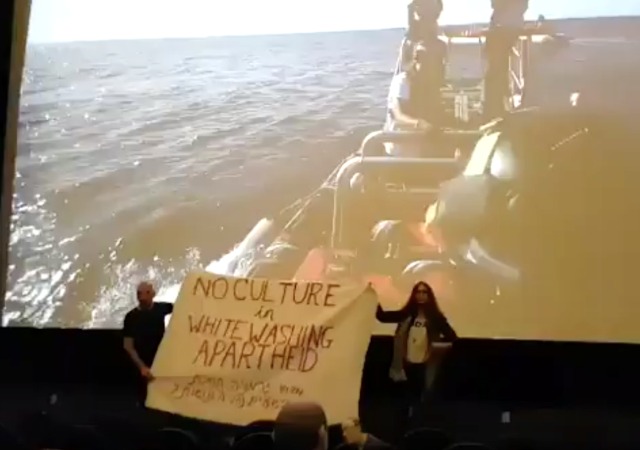 Who would bash Israel and Jews during a Holocaust film in Berlin, Germany?? These two BDS idiots apparently.

Two activists from the Boycott, Divestment and Sanctions campaign disrupted the presentation of an Israeli Holocaust film in Berlin last week, prompting Israeli security officials to evict the protesters as the audience booed the stoppage caused by the BDS people.

Based on video footage of the disruption, The Jerusalem Post was able to identify one of the BDS activists as Ronnie Barkan, an anti-Zionist from Israel, whose conduct Berlin’s intelligence agency classified in an August report as antisemitic.

Barkan did not immediately respond to a Post press query regarding his activity and the name of the second activist. He did, however, acknowledge on Twitter that “In case you were wondering what was being screened while we disrupted the event.” The activists can be seen on a video holding a sign that read, “No culture in whitewashing Apartheid.”

The nearly two-minute video of the disruption by Barkan and his co-activist was posted on YouTube by the pro-Israel Germany-based group Aktionsforum Israel. The group wrote under the video that BDS attempted to sabotage a film about the Holocaust on October 4.

“This recalls the speech from Bjoern Hoecke with the culture of forgetting,” the group wrote. “Both BDS and parts of the Alternative for Germany [AfD party] as well as the NPD [neo-Nazi party] have a problem with this topic.”

Hoecke, an AfD politician, slammed the memorial in Berlin to victims of the Nazi Holocaust as a “monument of shame.”

Timothy Grossman, the director of the Babylon cinema, where the Israeli film festival was featured, told the Post by email that the cinema plans to file criminal charges against Barkan and the other activist. Writing while on vacation, he said the film festival covering the Holocaust showed more than 40 films with nearly 4,000 visitors.

He said he was himself surprised by the large turnout.

According to an article on the Austrian-based pro-Israel website Mena-Watch, “two hooligans of the BDS movement disrupted the Seret Israeli film festival.”

In 2017, Israeli director Amichai Greenberg filmed The Testament about the Holocaust in Austria.

In August, the Post reported Berlin’s intelligence document had cited examples of BDS that were widely condemned as antisemitic by German politicians and experts in the field of antisemitism. One of the outbreaks of BDS-animated antisemitism outlined was the storming of an Israel event at Humboldt University. At least three highly aggressive pro-BDS activists lashed out at Israeli survivor of the Holocaust Deborah Weinstein and MK Aliza Lavie (Yesh Atid). The event had been titled, “Life in Israel – Terror, Bias and the Chances for Peace.”

Barkan and Majed Abusalama, two of the activists who disrupted the Humboldt event, were barred from speaking at BDS events in the city of Oldenburg prior to the Berlin event due to antisemitism.

Stavit Sinai, a third BDS activist at the Humboldt event, was removed from the lecture hall as she “swung [her fists] wildly around her and [at the] attendees,” according to a statement from the pro-Israel German-Israel Friendship Society. She “continuously attempted to reenter the lecture hall and pounded on the door,” said the group.