Trump Walks Back Threat to Shut Down Government Over Border Security

Trump Walks Back Threat to Shut Down Government Over Border Security

“But I don’t want to do anything that’s going to hurt us or potentially hurt us.” 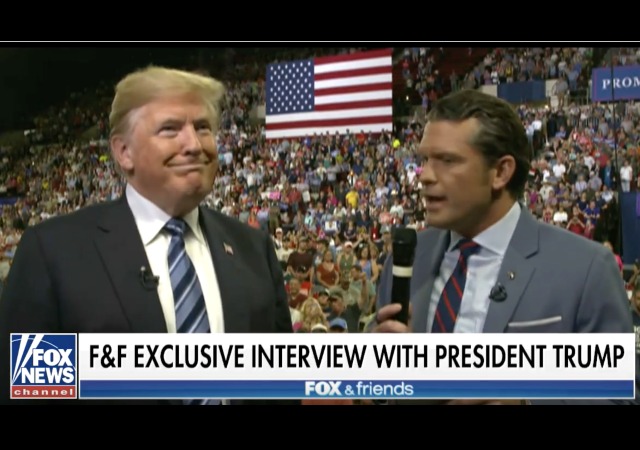 The hearing for Supreme Court nominee Brett Kavanaugh dominated the headlines this week, which means you may have forgotten that the government faces a possible shutdown if Congress cannot get legislation to fund the government.

Trump threatened during the week to shut down the government if he doesn’t get funding for the wall. His tune changed right before a rally in Billings, Montana, when he told Fox News that he doesn’t want to do anything to harm the Republicans going into November.

On Wednesday, Trump told reporters that the border wall remains important and if he doesn’t get the money to kickstart the project, he’s willing to shut down the government. He said: “If it happens, it happens. If it’s about border security, I’m willing to do anything. We have to protect our borders.”

The House and the Senate cannot agree on how much money the Department of Homeland Security will receive for the 2019 fiscal year. The House bill has $5 billion for the border wall. The Senate only has $1.6 billion.

EXCLUSIVE: @POTUS shares his message with @PeteHegseth ahead of his rally in Montana pic.twitter.com/wKXbJloWWH

Something changed because Trump walked back his threat. From Fox News:

“I guess when you get right down to it, it is up to me. But I don’t want to do anything that’s going to hurt us or potentially hurt us,” he said. “I have a feeling that the Republicans are going to do very well.”

Midterms have a history of not treating the sitting president’s party well. Granted, the Democrats need to flip 24 seats and hold the ones they already have. Republicans only have a two-seat majority in the Senate. It’s not out of the question for either party to come out on top in November, which makes Trump’s move wise because any little thing could shift the favor to Democrats.

Conversely, not building the wall will hurt us. Leave it to the liberals, um, social democrats, er, socialists not to waste a crisis…

Hispanics are second only to blacks in their per capita crime rate, at a high cost to taxpayers.

Thye have large families, and those children draw significantly more welfare than average.

Impose taxes or fees on billions of dollars (70 billion and growing)being transferred to family members in Mexico. Allocate all that revenue to the wall and other enforcement.

One way or another, we should be extracting at least 20% of that &0 billion. That would be 14 billion a year. Would that pay for the wall?

mexico has been benefiting from illegals in a big way, 70 billion is a staggering number. Trump said he was going to make Mexico pay, this would in fact make Mexico pay. Maybe it should be 30% or 40%, how much could we get away with? How loud would Mexico squeal?

I wish people would stop saying that the Senate is in danger. Nobody serious thinks the Senate will flip to the Dems. The House is another story.

If he signs another abomination like the last omnibus bill, I’m going to be pissed off. He promised he would never do that again.

With this concession Trump has made, if it materializes, he has broken a big promise, and jeopardized the House majority, thus his entire agenda. He has taken the RINO position to allow fear of media reaction to control politics. He is looking weak.

Trump, at least, is a pragmatist in this regard. His is a binary decision, to sign or not to sign whatever comes out of the House/Senate. He literally cannot *make* the Legislative branch produce the kind of budget that is needed, all he can do is jawbone the issue until the actual budget (or continuing resolution of doooom) is dropped on his desk.

Even though the Senate most likely will have more (R) in it next year, the House will have fewer of them, which will make getting any kind of real conservative spending budget a little less likely. Darnit.

Then I think of the budget-busting monstrosities that Hillary would be shoving for and once again, I’m grateful for President Not-Hillary. May he reign for another six years.

The wall is nice, I hope they build it, but it isn’t nearly as important as ENFORCING the current laws to stop the human trafficking for cheap labor. If employers paid a price for illegally using trafficked men, women and children and we allowed ICE to send home those who come here illegally, we wouldn’t really need the wall because they wouldn’t risk their lives and fortunes coming across a dangerous border to live in fear of being deported, they’d go get a green card and come here legally and get the full protections of the law.

Nobody ever talks about this, but the truth is that we allow the corporations (dairy, construction, etc) to pay less than a living wage and earn more in profits because they don’t have to pay enough for their workers to afford housing, medical or food. So the big corporate dairy farmer gets more income, and you and I get cheaper lettuce, but we pay way more for that lettuce in taxes for welfare, section 8 medicare and everything else the corporate dairy farmer doesn’t have to pay for. So we pay MORE for lettuce and construction than we would if the farmed paid a fair wage and charged a fair price for the lettuce.

There is nothing noble about human trafficking for cheap labor. Nothing.

Politicians, businesses, activists, and ladies of leisure profit from labor and environmental arbitrage. Not to mention immigration reform is a cover-up of collateral damage from social justice adventures, Obama’s trail of tears, Planned Parenthood, and diversity (i.e. color judgments including racism).

I think that this signals that Trump is preparing plan B, which is likely to be using DOD funding to build wall, without Congressional approval, under his current national security powers.

This relieves pressure on the Republican members of Congress and still gets the job done.

The nation does not deserve any more stalls. We need action. His own party will not deliver this to him. I don’t care about pressure on republicans, what pressure is that, other than big globalist donors. There would be a major furor over building the wall outside of regular funding. We cannot assume Trump would do that, since he has just made a major concession. Those awful RINOs in the House would react negatively to “pressure” from DOD funding also.

This is a bit short sighted, I’m afraid.

What he does NOT want to happen is to have to deal with a House controlled by the moonbat Democrats. and, that is probably what will happen if he shuts down the country over funding for the border wall, BEFORE the midterms.

Look at these horrible people providing cover for human trafficking to provide cheap labor. They want these men, women and children to have to pay large sums of money to cartels and coyotes, risk rape, robbery, and their lives just so they can attempt to find jobs to support their families

Why not allow them a legal method to cross the border??????? Shameful virtue signalling from people who should know better.

I bet those of you who down voted didn’t bother to read the article.

The POINT of this venture was to sell this meme: “People seeking refuge and asylum at our border have been continuously dehumanized though xenophobic attacks.”

Yeah, right. It’s all about xenophobia. Uh huh. No mention about the MILLIONS coming for economic opportunity who falsely claim asylum to game the system and thus completely overwhelm it for those who are TRULY in need of asylum. No mention that many if not most “seeking asylum” will never return once released.

If I was fleeing true violence and persecution, then my biggest concern in life is not going to be that once I cross the border I will “be automatically detained, often for many months, and held in prison conditions”. Any safe conditions with food and shelter would sound pretty sweet at that point.

These people should be ashamed they allowed themselves and their history to be used to sell a false narrative about xenophobia.