“We will never surrender America’s sovereignty to an unelected, unaccountable, global bureaucracy.” 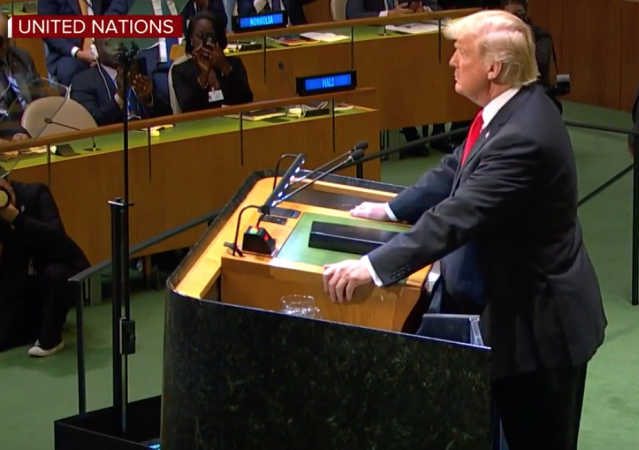 Trump praised North Korea, lambasted Iran, saying he’s considering more sanctions, and made clear he will not apologize for his domestic policy.

Globalism was in his crosshairs, as was foreign aid to countries who wish America harm.

.@POTUS: “Iran’s leaders sow chaos, death and destruction. They do not respect their neighbors or borders.” #UNGA pic.twitter.com/arFZF8WbLK

.@POTUS: “The sanctions will stay in place until denuclearization occurs.” #UNGA pic.twitter.com/sYuDhoCaYf

.@POTUS: “We reject the ideology of globalism and we embrace the doctrine of patriotism.” #UNGA pic.twitter.com/jmoG3rZ6dI

.@POTUS: “We are only going to give foreign aid to those who respect us.” #UNGA pic.twitter.com/t2rNDfBsp0

.@POTUS: “We must protect our sovereignty and our cherished independence above all.” #UNGA pic.twitter.com/w5Xunt7Qgs

Naturally, the press has seized on one line. Trump’s claim he’s accomplished more than any other president during his first two years in office was met with laughter.

.@POTUS: “In less than two years, my administration has accomplished more than almost any administration in the history of our country.” #UNGA pic.twitter.com/7423ogQbNT

And so the headlines are ranked thusly: 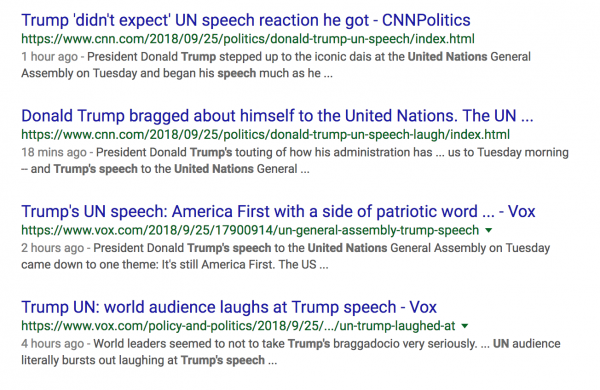 To his credit, Trump laughed it off saying, “he didn’t expect that reaction”, drawing even more laughter.

You can watch the full speech here:

notamemberofanyorganizedpolicital in reply to DouglasJBender. | September 25, 2018 at 5:02 pm

Yes, whose hidey hole is Oh-Bow-Mao in these days?

It was a very good speech and well delivered.

It was a strong America First speech. Caught some “ambassadors” by surprise no doubt. He also had a great and natural reaction when he bragged about his first 2 years as being historically accomplished as only Trump can say it. Some laughed. And his reaction was spot on.

We’ve never accused Trump of excessive humility. And he did a wonderful job in the speech picking up the laughter and turning it into a joke.

Here’s the clip, and how it was written up. Conveniently, the remark that provoked the laughter is not audible.

“Praising America’s “booming” economy, the brash billionaire said: “My administration has accomplished more in two years than almost any administration in the history of our country… so true.” ”

I saw the original speech, and subsequent clips. That little ellipsis is where the audience remark was. He appears to have agreed with it, by responding, “so true”.

Then he said “I wasn’t expecting that reaction but that’s ok.”

“His ad-lib prompted a round of applause from the assembled world power brokers.”

Whatever else you want to say about him, there is no denying he puts the country first! Very refreshing.

And I saw somewhere, might have been Yahoo, a headline that read something like, “UN members laugh at Trump”.

Actually I just googled UN laughs Trump and got lots of hits from non biased classically trained journalists with the highest possible standards.

“We will never surrender America’s sovereignty to an unelected, unaccountable, global bureaucracy”

I’ll believe it when America stops funding that bureaucracy.

Why? The UN has its uses and deserves some funding, though probably a lot less than it’s getting. But how does that mean we should give it any of our sovereignty? No previous president has done so — not even 0bama, who surely would have if he’d thought he could get away with it — regardless of how much money they threw at it.

Personally, I would not have made the ‘administration accomplishment’ remark but it’s true. The idea that the remark was met with laughter though, is appalling. Most of the laughing hyenas are supported by the U.S… I would like to see these contemptible mooches identified in order to have their aid seriously cut.

Somebody made a remark, and he said “So true!” “I didn’t expect that” And he got cheers.

I guess it’s that time again. He always makes these speeches so long. Anyway, here’s a summary of each paragraph of Trump’s 2018 UN speech

Or, you could read the transcript.