While Japanese billipnaire Yusaku Maezawa plans his out-of-this-world getaway, the Pentagon lays out action plan to establish Space Force by 2020. 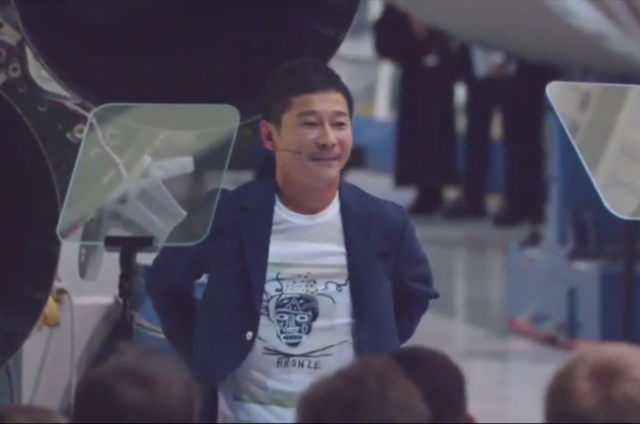 A former drummer in a punk band, billionaire Maezawa will take a trip around the moon planned for 2023 aboard its forthcoming Big Falcon Rocket spaceship, taking the race to commercialize space travel to new heights.

The first person to travel to the moon since the United States’ Apollo missions ended in 1972, Maezawa’s identity was revealed at an event on Monday evening at the company’s headquarters and rocket factory in the Los Angeles suburb of Hawthorne.

Maezawa, who is most famous outside Japan for his record-breaking $110 million purchase of an untitled 1982 Jean-Michel Basquiat painting, said he would invite six to eight artists to join him on the lunar orbit mission.

The 42-year-old business mogul says he wants his guests to be inspired to create once they return to Earth. While the itinerary is known, the price-per-ticket is not.

Mr. Maezawa’s intent to follow in the contrails of American astronauts, who first looped the moon in 1968 aboard the Apollo 8 mission, was announced at an event at the company’s headquarters in the Los Angeles area. The expensive trip would cost at least tens of millions of dollars, if not a couple of hundred million, and when it would occur was not yet announced. Neither Mr. Musk nor Mr. Maezawa would disclose the price.

Mr. Maezawa is to ride a yet-to-be-built rocket known as the B.F.R., on a journey that would take four to five days, Mr. Musk said.

Not only is Maezawa’s craft still in the planning stage, so is the United States Space Force, the new agency that has been touted by President Trump during recent speeches. Interestingly, Deputy Defense Secretary Patrick Shanahan has recently issued a detailed plan for how the Pentagon will move forward to create the USSF by fiscal year 2020.

The plan, laid out in a Sept. 10 memo titled “Space Reorganization and Management Tasks,” includes actions that the Pentagon will pursue using executive branch authorities — standing up a unified command for space, a Space Development Agency and Space Operations Forces. These proposals were presented to Congress in a report on Aug. 9.

The establishment of the Space Force as a military branch must be approved by Congress and written into legislation. Shanahan’s Sept. 10 memo, a copy of which was obtained by SpaceNews, explains the steps DoD will take to develop a legislative proposal.

The memo makes it clear that the space reorganization is being led from the top down. Shanahan is overseeing the entire effort, but the Chairman of the Joint Chiefs of Staff and the undersecretary of defense for policy also have significant roles. The Air Force, which owns 90 percent of the military’s space programs and functions, only will have a limited support role in shaping the transition to a future Space Force.

As plans for spacecraft and space defense proceed, I sure hope there are line items in the budget to include lots of duct tape and epoxy glue in emergency kits. A few practical items among all the technological wonders sure helped patch up the International Space Station recently.

Perhaps NASA could look into this and sell seats and help foot the cost of space exploration. Making a few bucks would ease the burden on American tax payers and benefit NASA. The country is based on capitalism, so why not capitalize?

HOW MUCH for basquat refrigerator art?

Yes, but, can they sell the budget one-way trip to the Moon?

Or (even cheaper) into (but not out of) lunar orbit?