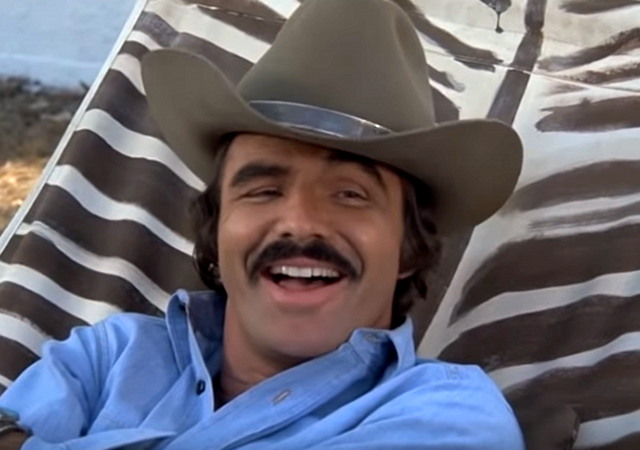 Hollywood legend Burt Reynolds passed away at the age of 82 this week from cardiopulmonary arrest. He will be sorely missed.

Reynolds was a great actor but also a genuine movie star.

Mike Barnes of the Hollywood Reporter:

Burt Reynolds, Movie Star Who Played It for Grins, Dies at 82

Burt Reynolds, the charismatic star of such films as Deliverance, The Longest Yard and Smokey and the Bandit who set out to have as much fun as possible on and off the screen — and wildly succeeded — has died. He was 82.

Though beloved by audiences for his brand of frivolous, good-ol’-boy fare, the playful Reynolds rarely was embraced by critics. The first time he saw himself in Boogie Nights, he was so unhappy he fired his agent. (He went on to win a Golden Globe but lost out in the Oscar supporting actor race to Robin Williams for Good Will Hunting, a bitter disappointment for him.)

“I didn’t open myself to new writers or risky parts because I wasn’t interested in challenging myself as an actor. I was interested in having a good time,” Reynolds recalled in his 2015 memoir, But Enough About Me. “As a result, I missed a lot of opportunities to show I could play serious roles. By the time I finally woke up and tried to get it right, nobody would give me a chance.”

Ace of Spades is apparently a Reynolds fan and listed his favorite films in a tribute post:

1. The Longest Yard — a very cynical movie about sports and prison and dirty, dirty criminals. Also funny. I always felt weird watching this as a kid, because it made you root for killers and rapists. I’ll never forget the lightbulb trap.

2. Deliverance. Obviously. They pull a Rian Johnson Subvert-Your-Expectations thing with the Burt Reynolds character but he’s good in it and the film, obviously, is legendary. Primal and potent.

3. My absolute favorite movie from the early eighties — Sharky’s Machine. Man, I was just thinking about this movie the other day. I wonder if it holds up. All I know is I watched it about 300 times as a kid and it held up through all of those watchings.

Reynolds was amazingly versatile. His great sense of humor made him a natural in comedies like Smokey and the Bandit:

When he chose a much more serious project like Deliverance, you went along for the journey, as disturbing as it was:

Ed: What the hell do we do now?

Lewis: Now you get to play the game.

I never thought about it before, but Burt did not seem to be a typical Hollywood phony to me. Perhaps that is part of why I always liked him.

Definitely a Hollywood anomaly. One of the good guys, he will be missed.

liked evening shade. trying to get dvd of it now.

Good enough actor that I didn’t need to know his politics.

He never struck me as a guy who was full of himself. You could sit down and have a beer with him. One of the guys. Not all of them are of that make. Seems to me a life well-lived.

Bury Burt at Arlington. There’s been a recent burial we can still dig up.

(Take the current carcass and bury it anywhere else – along with another rino rat, Ben Sasse:)

The contrast between these quotes from the first and last paragraphs of the article by Mike Barnes is instructive:

[Burt Reynolds] set out to have as much fun as possible on and off the screen — and wildly succeeded.

Burt’s reflection upon that choice later in life:

By the time I finally woke up and tried to get it right, nobody would give me a chance.

I went to see Smokey and the Bandit with my Dad… I was 8 or 9 years old at the time it came out. Later that summer he took my sister and me on a trip to a dude ranch in Colorado. I remember driving all the way home to Illinois with our luggage crammed into the back seat with me because Dad had filled the trunk with Coors.