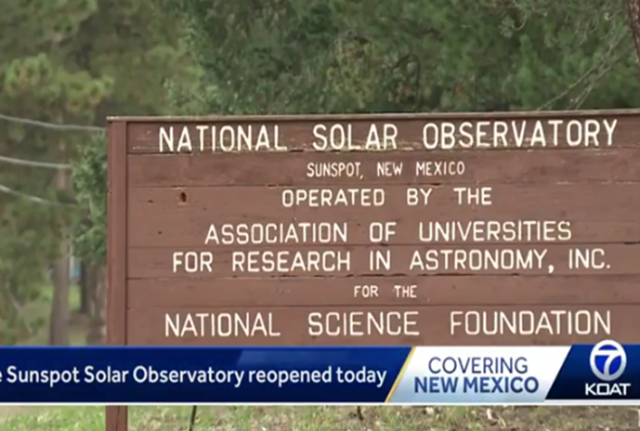 There has been a significant amount of security drama recently that centered on the Sunspot Solar Observatory, a national facility on a New Mexico peak.

An emergency evacuation of the facility following the arrival of federal agents and Black Hawk helicopters, which then led to a 10 day closure.

“The FBI is refusing to tell us what’s going on,” Sheriff Benny House told the Alamogordo Daily News shortly after the closure. “We’ve got people up there (at Sunspot) that requested us to standby while they evacuate it. Nobody would really elaborate on any of the circumstances as to why. The FBI were up there. What their purpose was nobody will say.”

“But for the FBI to get involved that quick and be so secretive about it, there was a lot of stuff going on up there,” he added. “There was a Blackhawk helicopter, a bunch of people around antennas and work crews on towers but nobody would tell us anything.”

Once the facility was reopened, it was announced that the action was taken as part of a criminal investigation.

“AURA has been cooperating with an ongoing law enforcement investigation of criminal activity that occurred at Sacramento Peak,” AURA representatives wrote in a statement Sunday (Sept. 16). “During this time, we became concerned that a suspect in the investigation potentially posed a threat to the safety of local staff and residents. For this reason, AURA temporarily vacated the facility and ceased science activities at this location.”

But things are about to get back to normal.

“In light of recent developments in the investigation, we have determined there is no risk to staff, and Sunspot Solar Observatory is transitioning back to regular operations as of September 17th,” the statement added.

Now, court documents reveal that the FBI investigation required that the observatory be shut down as agents conducted computer forensic searches for child pornography.

The source of child pornography was traced to an IP address used at the observatory and a source within the building observed a computer with “not good” images on it, the warrant states.

An investigation by the FBI revealed that a janitor is the main suspect in the search, however he has not been charged with a crime even though his name in on the warrant.

The warrant states the suspect would use the observatory Wifi and a personal laptop to download the child pornography.

A limited number of people have access to the observatory from dusk until dawn, which helped narrow their search.

With the famous Roswell, New Mexico facility less than a three-hour drive from Sunspot, social media was filled with speculation the closure.

THEY ARE HERE!
Our extraterrestrial friends are here! It’s not a joke. This picture taken with a iPhone 10 with a solar filter. The same day the FBI closed and evacuated the sunspot solar Observatory & six other solar observatories for national security purposes. They are here! pic.twitter.com/g5c7B2QFzo

Read what my psychic sense tells me occurred at the Sunspot Observatory on Sept. 9. It does involve aliens and a message. https://t.co/EG1b5Q24cV pic.twitter.com/Z4IFzhNFx1

Sadly, however, it is just another awful case of predation on our children.

This story doesn’t add up.

They didn’t say it was “Human” child porn..maybe those little green men weren’t men after all!

Also, is it necessary to fly in on a helicopter to confiscate someone’s computer? WTH is going on here?

It does involve aliens and a message.

It would be more fun if it involved aliens and a massage.

It’s safe to say the government is lying to us, again.

It’s a great trick, except when it’s so patently ludicrous. And having made it so clear that they’re willing to lie about it, they’ve ensured that any future legitimate charges will be taken less seriously.

My money is on military espionage. Someone tapped into the antenna and was using them to intercept signals, probably from White Sands.

My guess as well.