Tapper: “So I’m assuming I’m not going to get an answer for the other thirty-eight trillion dollars.” 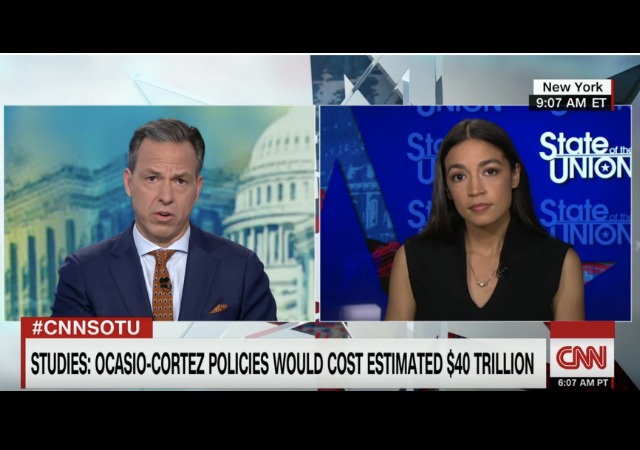 CNN State of the Union host Jake Tapper, one of the last reliable MSM reporters, got socialist Alexandria Ocasio-Cortez all tongue-tied when he asked her plain and simple how she would pay for her $40 trillion platform. From Mediaite:

“Your platform has called for various new programs including Medicare-for-all, housing as a federal right, a federal jobs guarantee, tuition-free public college, canceling all student loan debt,” said Tapper, listing a few of the items the New York candidate has promised to pursue. “According to nonpartisan and left-leaning studies friendly to your cause including the Center on Budget and Policy Priorities or the Tax Policy Center, the overall price tag is more than $40 trillion in the next decade.”

“You recently said in an interview that increasing taxes on the very wealthy, plus an increased corporate tax rate would make $2 trillion over the next ten years,” Tapper continued. “So where is the other $38 trillion going to come from?”

First of all, Tapper did not make up those numbers out of thin air. Even Vox admitted that the platform costs too much. That publication used left-leaning and nonpartisan organizations that show the platform costs around $42.5 trillion.

Medicare for All alone costs $32 trillion.

So how would Ocasio-Cortez pay for it? Mediate continues:

“One of the things we need to realize when we look at something like Medicare for all––Medicare for all would save the American people a very large amount of money,” replied Ocasio-Cortez. “And what we see as well is that these systems are not just pie-in-the-sky. They are, many of them are accomplished by every modern civilized democracy in the western world. The United Kingdom has a form of single payer health care. Canada, France, Germany. What we need to realize s that these investments are better and they are good for our future.”

“These are generational investments,” she added. “So that not just, they are not short-term band-aids but they are really profound decisions about who we want to be as a nation and how we want to act as the wealthiest nation in the history of the world.”

Tapper continued to press Ocasio-Cortez and pointed out that the taxes she mentioned only covered two points in the platform. How did she reply? Same:

Ocasio-Cortez then told the story of how individuals she spoke to in New York didn’t have insurance, and other stories about how her generation doesn’t buy cars.

“What this is, is a broader agenda. We do know and acknowledge that there are political realities. They don’t always happen with just the wave of a wand, but we can work to make these things happen,” she said. “In fact, when you look at the economic activity that it spurs — for example, if you look at my generation, millennials, the amount of economic activity that we do not engage in. The fact that we delay purchasing homes, that we don’t participate in the economy in purchasing cars etc. as fully as possible, is a cost.”

“It is a externality, if you will, of unprecedented amounts of student loan debt,” she concluded somewhat cryptically.

Tapper responded by saying that he was “not going to get an answer for the other thirty-eight trillion dollars,” but told Ocasio-Cortez that the show will have her on again and hopefully she will have an answer then.

Loco Oco’s voters are even more economically ignorant than she is, so how to pay for all the freebies isn’t of concern to them.

Pretty face, with a vacuum behind it.

notamemberofanyorganizedpolicital in reply to JusticeDelivered. | September 18, 2018 at 9:17 am

She’s as ugly as the open jaws of Hell.

Look at her demon possessed eyes……

It doesn’t concern them because “the government” will pay for it all.

notamemberofanyorganizedpolicital in reply to Anchovy. | September 18, 2018 at 9:17 am

Why doesn’t she hand over all her money and wealth and live the rest of her life in sack clothe and ashes?

Jake….Jake….you never really expected Bodega Barbie to answer your question, did you?

Now, now….she stayed in a Holiday Inn Express last night and she’s waiting for her Nobel in Economics call any second now! She’s as qualified as Paul Krugman IMHO.

I had the pleasure of knowing both Franco Modigliani and Milton Friedman, both of whom agreed with our political position on a specific issue. Friedman was was a bit cranky, but I have always like cranky old goats, valuing them for their wisdom. I don’t think we need to worry about Ocasio-Cortez getting anywhere near a Nobel prize.

She’s as qualified as DUH WON was when he got his.

This is just a small quibble as you are largely correct. But some of the corporate taxes are paid by the shareholders and employees.

This is how the woman speaks, who could actually take anyone seriously that speaks in such a manner?

She is rather slow, where her brain cannot keep up with her lips. Her world view is very superficial.

Such a very dim bulb…

A trillion here and a trillion there, and pretty soon you’re talking about serious money!

Maybe if she hadn’t paid $5000 for the green pantsuit outfit she was wearing in a photoshoot a few days ago, she could afford a car.

She’s on the Soros dole.

And those single-payer systems have chronic shortages of doctors, and wait times for needed medical procedures are months to years long. Canadians who can afford it often come to the U.S. to purchase surgeries or diagnostic procedures that they can’t obtain in a timely manner in Canada.

The U.K.’s NHS is also inadequately funded, and chronically in need of more money.

But yes, by all means let’s take these single-payer systems that are already not working well in smaller countries, and adopt them here so that they can fail on an even more massive scale.

One thing you probably never hear about the Canadian system is how, over the past 25 years, governments of all persuasions (cons, lib and socialist) have removed procedures from the government health plan to try and save money. In many cases people don’t hear about it until they show up for treatment and find out they have to pay themselves.

As a former mentor put it, “if you think health care is expensive now, just wait until it is free.” It isn’t a matter of some not being able to afford health care, but rather as a country we can no longer afford it and the excessive percentage of GDP that it has become. All of the sage wisdom that I was exposed to over the years has continued to be true. In math, the magic number is 6, where 1x2x3 = 1+2+3, but in medicine it is 3 (we’ll skip the tube rule for now). That is the maximum number of drugs one can usually take before the reason to take a drug is to treat a side-effect induced by a previous drug. I am in my early 60’s, and I have two types of friends these days. Those who might take one or two drugs, and those who are on 10 or more, all paid for by tax $$$. I used to joke that the difference between lawyers and doctors was that doctors don’t actually poison their patients, but I’m no longer sure that is true.

Notice how carefully she dances around actually saying her grandfather actually died during the storm, while implying he did.

And the problem with the new “count” is that it’s number predicted by a computer model. These aren’t actual people with names.

Ask for the names, they’ll call you racist. I’m not kidding, try it and see.

The Odumbo scam (and scams like the Maddoff scam) only works once in a hundred years.

If only she had the talent and depth of Maxine Waters, Hank Johnson, Sheila Jackson Lee, Alcee Hastings, Al Green, Keith Ellison, Fredricka Wilson, Corey Booker, Kamala Harris, hillary klinton or even Nancy Pelosi’s: she could be another Odumbo and achieve the destruction of the United States.

Sad, sad times for our country.

That $2B from “rich people” is not a sure thing, either. She seems unaware that a good many of them are rich because they are very good a navigating the murky backwaters of our economy. That is how they got rich (in many cases) and how they manage to stay that way. One of their strongest skills is avoiding taxes. She is no the first proponent of”taxing the rich” to find that they are not stationary targets, but quite mobile and even hard to identify.

The biggest disappointment is that she actually has a degree in Economics from a name school. She just might be a poster-child for the affirmative-action-meets-higher-ed movement.

Tard such as her and the Burnmeister think money grows on trees,wait till they discover reality.

I’ll say it again. Her sole purpose in life is to be like Bernie. She is only there to suck up donations from the the young and useful idiots of the fringe left as well as to keep the children playing on the Dem plantation. Once the race gets real, like Bernie she will lose the primary (duh) and the DNC will give the money raised by these fools over to “real” candidates, like Booker or Warren or…??

Occasional-Cortex omits the titanic inefficiencies, colossal wastage, waiting times longer than the age related life expectancy of a patient, the absence of an infinite cheque account and the torture of paying taxes allegedly for healthcare while more frequently not receiving it, and not receiving a tax rebate if one choses to fund private insurance (thereby subsidising the taxpayer funded State system).
The staring glare of transfixed Leftist derangement. Thank God she’s not flashing those gnashers.
See the same unnerving Soros cloned features in the New Zealand eco-Marxist minority prime minister, https://www.y-axis.com/news/wp-content/uploads/2017/11/Jacinda-Ardern.jpg

Every time she opens her mouth, dumb falls out. If you have ever wondered about the state of higher education today, remember that this moderately attractive but intellectually vacuous female holds a degree in – wait for it – economics!!