Kim reportedly wants end to 7 decades of hostile relations with US before end of Trump’s first term. 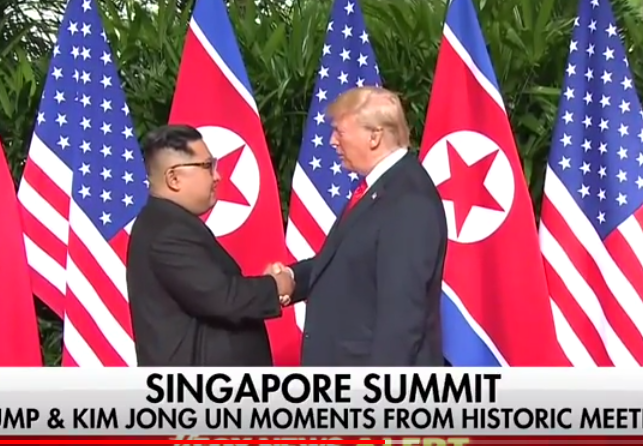 This week’s developments on the Korean Peninsula following June’s Singapore Summit have been fascinating.

The statement from the Korean Central News Agency wasn’t new information — Kim has repeatedly declared similar intentions before — but allows hopes to rise that diplomacy can get back on track after the recriminations that followed Kim’s meeting in June with U.S. President Donald Trump in Singapore. The impasse between North Korea and the United States, with neither side seemingly willing to make any substantive move, has generated widespread skepticism over Trump’s claims that Kim is intent on dismantling his nuclear weapons program.

…Kim was paraphrased in the statement by his propaganda specialists as saying that it was “his will to completely remove the danger of armed conflict and horror of war from the Korean peninsula and turn it into the cradle of peace without nuclear weapons and free from nuclear threat.”

Next, in recent meetings to firm up a date for a summit with South Korea, Kim told officials that he had “faith in Trump”.

Chung Eui-yong said Thursday that Kim emphasized during a meeting in Pyongyang on Wednesday that he has not once talked negatively about Trump to anyone including his closest advisers.

Chung says Kim said that he wishes for North Korea and the United States to put an end to their seven decades of hostile relations before the end of Trump’s first term.

Finally, the meeting with the South Koreans were successful. The third summit between Kim and South Korean President Moon Jae beginning September 18.

The five-member delegation led by Chung Eui-yong, head of the presidential National Security Office, made a one-day trip to Pyongyang on Wednesday to arrange the planned summit, as well as discuss inter-Korean relations.

The delegation’s trip to the North comes amid growing concerns over a stalemate in denuclearization talks between Pyongyang and Washington. U.S. President Donald Trump canceled a planned North Korea trip by his Secretary of State Mike Pompeo last month, citing a lack of progress in nuclear talks.

The stalled denuclearization negotiations have apparently taken a toll on Seoul’s efforts to advance inter-Korean relations on various fronts, as Washington remains firm on maintaining sanctions until the North takes substantive steps to abandon its nuclear weapons. The North has complained about slower-than-expected progress in inter-Korean relations.

It’s a good thing we have the Deep State (steady state?) trying to stop this! Say No To Peace!

I’m sure the national news media will be covering this soon, once they’re done with the more important question of whether or not a majority of the cabinet secretaries agree that President Trump is a poopy head.

Kim seems eager to strike a deal in case the Deep State keeps Trump from being re-elected.

Trump is making more happen than has happened in a long time – at the expense of revealing our diplomatic corps general ineffectiveness and how many in Washington have a vested interest in a very poor status quo.

Why do the media and experts get triggered at seeing real progress in the world? Does it reveal the peace prize for Obama as a sham? McCain as a war monger?

“The North has complained about slower-than-expected progress in inter-Korean relations.”

Translation: The scorpion is anxious to make a deal with the frog.

How embarrassing will this all be for Democrats, their propagandists in the media, the Deep State and liberals when Trump gets a Nobel Peace prize that was actually deserved.

So what is in all the news? NYT anonymous tattle tale, Cory Booker (the patriot) who is not afraid to release emails already cleared, Colin Kaepernick doing something “risky” that will make him millions of $$. News should be changed to Olds. Olds organization CNN. Hope General Motors is not offended