“There are those who say, ‘What if we get rid of him? Then we’ve got that Vice President and he’ll be worse.’ I say knock off the first one and then go after the second one. We have the power.” 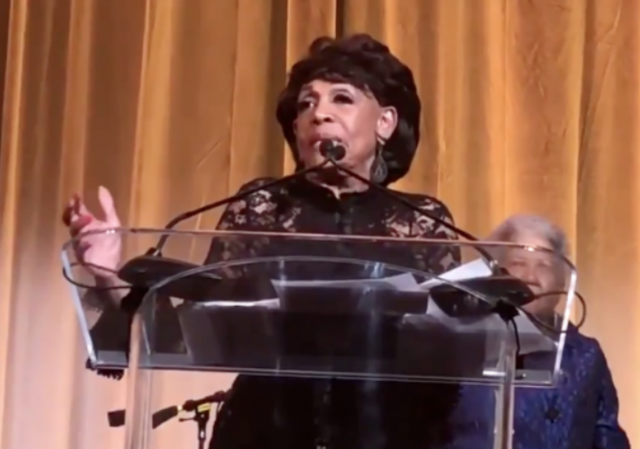 You can always count on Rep. Maxine Waters to give away the plans to destroy Trump’s presidency and administration.

The latest of which occurred Friday and included a suggestion to “knock off” Trump, which was greeted with applause and cheers.

“There are those who say, ‘What if we get rid of him? Then we’ve got that Vice President and he’ll be worse.’ I say knock off the first one and then go after the second one. We have the power. We have the numbers But we’ve got to understand our power and we’ve got to use our power. Not only do we have individual power, but just think about the readers that you have. The people who look forward to getting your newspapers.

…That’s all power. Let’s use it. Let’s have this president understand in ways that we have not done before, that we are the patriots of this country. We are the ones that have stood by this country no matter what has happened to us. No matter that this country has not always embraced us. We fought in wars, came home and oftentimes didn’t have a house to live in and didn’t have a job, but we stayed with America, we fought for Democracy, we believe in the Constitution.”

As Fox News pointed out, it’s no secret that Waters and Trump don’t get alone. She’s always running her mouth about destroying the presidency and he suggested her IQ was somewhere in the 60s.

Waters and Trump have taken shots at one another for months, with Waters repeatedly calling for Trump’s impeachment. In June, Waters encouraged protesters to confront Trump Cabinet members publicly to shame them over the administration’s policies.

Meanwhile, Trump has repeatedly blasted Waters and House Minority Leader Nancy Pelosi, both California Democrats, and sought to cast them as the face of the party.

“The face of the Democrats is now Maxine Waters who, together with Nancy Pelosi, have established a fine leadership team,” Trump tweeted in June. “They should always stay together and lead the Democrats, who want Open Borders and Unlimited Crime, well into the future….and pick Crooked Hillary for Pres.”

Trump took another dig at Waters in July, again calling her “the new leader” of the Democratic Party and mocking her as a “low-IQ individual.”

“Honestly, she’s somewhere in the mid-60s, I believe,” Trump added.

Buuuuut, if we play, “Just imagine if a Republican Congresswoman had said this about Obama”, said Congresswoman would be shamed into resignation for suggesting we “knock off” the president.

The Waters’ and others afflicted with Trump Derangement Syndrome are not bound by their hypocrisy, but that doesn’t mean we won’t be here to point it out.

SOP for KKK was to insert Lone Wolf into their speeches, calling on individuals to take matters into their own hands while maintaining plausible deniability.

She thinks she’s being clever.

This woman is lower and dumber than dirt. “‘peach foti fibe” indeed.

I would ask Maxine: On what charge would you attempt to impeach Pence, assuming he becomes president.

And then I remember who I’m dealing with:

1) Maxine is a corrrupt, childish moron.
2) The Democrats will invent any charge they have to to justify the illegal overthrow of a hypothentical President Pence.

You might think you know who you’re dealing with, with Waters, but it’s not Waters: it’s the democrat leadership and the media:

She speaks directly for them.

It’s worth reviewing who Josef Stalin was, how he gained power, and what he did with it when he got it:

Remember: Among Barack Odumbo’s first acts was to stock his cabinet with a Maoist (Anita Dunn) and a communist (Vann Jones).

Maxine Waters would be in prison in another time in American history. Now, she’s the window into the soul of the American left.

Maxine Waters would be in prison in another time in American history.

BS. Everything she has said is protected speech. It isn’t and can’t be illegal.

Threats against the president are NOT protected speech. I suggest you do some homework before floating that load of crap. Threatening the President of the United States is a felony under United States Code Title 18, Section 871.

Waters is clearly inciting violence. She did it during the Rodney King riots, and has been doing it since Trump was elected, including calling for the harassment of Trump administration officials and Trump supporters. Whether YOU take her seriously or not, the first time someone acts out, and dedicates their actions to “Auntie Maxine,” she should be charged.

I can think of two grounds for her institutionalization. 1) she is as nutty as a fruit cake, even by California standards; 2) there is a federal criminal statute against threatening or calling for the assassination of the president.

Does this mean that we can suggest she deserves the same or worse treatment? Maybe people should start hounding and verbally attacking her everywhere she goes? How about similar treatment for her chief of staff? Her family? Close business associates? Perhaps the same type of campaigns as blacks have conducted on a bunch of people of other races should be used on them?

I think things are starting to clarify. The D’rats will ease back on the socialist “free unicorns for everybody” schtick, and go for an outright color war in 2020. Much like the Army of North Virginia at Gettysburg, Obama’s “fundamental transformation of the country” was as close to success as these losers have ever reached; they want those days back, and they’re depending on a monolithic “black vote” to give it to them again.

The D’rat model for the future of the United States isn’t Denmark or even Venezuela . . . it’s Zimbabwe and South Africa.

The fact that the Newspaper Publisher’s Association invited Waters to speak and probably gave her a nice honorarium (though not the level of Slick Willie) is just more proof that the MSM (including print media) are the enemies of the people*.

* Yes I deliberately chose that terminology.

Not all of them. But most.

Knock off the President? I’ve never heard that term used in connection with mere impeachment. To “knock someone off” means to murder them,. Mad Max is calling for assassination of the US President.

Sessions is right it. Unless he’s not.

Sessions is right on it. Unless he’s not.

When will Secret Service pay her a visit?

Do you think Maxine knows anything about the Kavanaugh hearings or do they just let her go off on her own and do the “impeach Trump” stuff?

Waters is Pro-Choice. She has deemed Trump unworthy. In Stork, she trusts.

There is blood in her eyes and retributive change in her heart.

We can only marvel and wonder what the reaction would have been if a Repub Rep had said the same things about obama! Can you just imagine?

What about their knocking off sessions? (Or could they not tell the difference if he’s dead or alive?)

Now, now! Be nice! She is every bit as spry, lively, and bubbly with enthusiasm as Ruth Bader Ginzzzzzzzzz…….

With all of the inflamed rhetoric coming from the mental midgets like Waters, I don’t EVER want to hear about any sort of “white privilege”. There should be no doubt that any sort of Republican could ever call for any violence to a Dem/Prog without shouts to high heaven.

Maxine Waters is calling for the assassination of the US President.
Why isn’t the secret service investigating this Marxist loon as she is at the very least instigating for the demise of a president.

I thought the Left was against hate speech,as memory serves they were all for a kinder gentler campaigning in the recent past,apparently unless they disagree with the office holder.

notamemberofanyorganizedpolicital in reply to jmccandles. | September 18, 2018 at 9:16 am

Maxine – “I can’t shut up my evil mouth” – Waters
is guaranteeing we get 100 years or more of TRUMP!

What Black American wants to be associated with
Demcrat Party Waters Carrier…….

1. She is very clearly not calling for his assassination, and nobody could honestly say he thought she was.

2. If she were advocating his assassination it would be protected speech. Mere advocacy, of anything at all, isn’t and can’t be illegal in this country.

Advocating for the assassination of the president would be protected free speech? I’m an account not a lawyer but I find that be surprising if it’s true.

To your first point I don’t think it’s a stretch to think she is being intentionally ambiguous. Those of us of an age have heard knock someone off to refer to murder but I don’t think I’ve ever heard anyone refer to impeachment as knocking someone off. It’s a very strange choice of words to say the least and if DeSantis should be challenged on using the expression monkeying around she should be called out for those words as well.

It is NOT clear that she is not calling for the assassination of the president. The term she used means “kill” or “murder.” It means nothing else. It is NOT a synonym for “impeach,” or any other lawful method of removing a sitting president. She could have said “remove him,” a term that is ambiguous (remove how?). But “knock off” means only one thing (especially within the context of her frequent suggestion and encouragement of violence against Trump, his associates, and his supporters) in American English.

Imagine the 3rd-world cesspool the USA would become if the Wicked Witch of the West Waters and those of her ilk and the gimmedat’ anti-social 85-at-best-IQ horde of her followers were to gain control of the USA.

They had control with Tyrant Obama the Liar.

How ’bout that! Marxine’s a gunslinger!

To use an antiquated term, that woman is a moron. And yet people vote for her. Repeatedly. Every time she opens her mouth, she is an advertisement for a republican form of government, but still we slide further into direct democracy. As someone said above, they want us to be Zimbabwe.

So get rid of Trump, get rid of Pence, and the presidency goes to the Speaker of the House. Dems expect to win back the House in a couple of months . . . any bets she’s fantasizing about “President Pelosi”? It won’t happen, but that’s the seed she’s trying to plant for the base.

Sorry Milhouse, she broke the law. You ever watch the “Godfather”, they do a lot of knocking off in that movie.

Can you imagine the high dudgeon this old fraud would have had if the word 00bama had been substituted for Trump and the word Biden for Pence? She would have been out there screaming racism, hate crimes, and every other words. But, because this mental midget is part of the #Resistance which has such illustrious members as her, Pelosi, and HilLIARy! Clinton, she feels that she can make such comments.

You do realize that with these comments, she is counting on having a Democrat House. Therefore the line of succession will fall to the Democrat leader of the House.

Waters ought to just say “appoint Nancy Pelosi as President” and then let’s see the reaction. I bet it wouldn’t be very positive.