“What he said about the majority black countries, that is tearing more at the fabric of America than attacks on the Twin Towers did.” 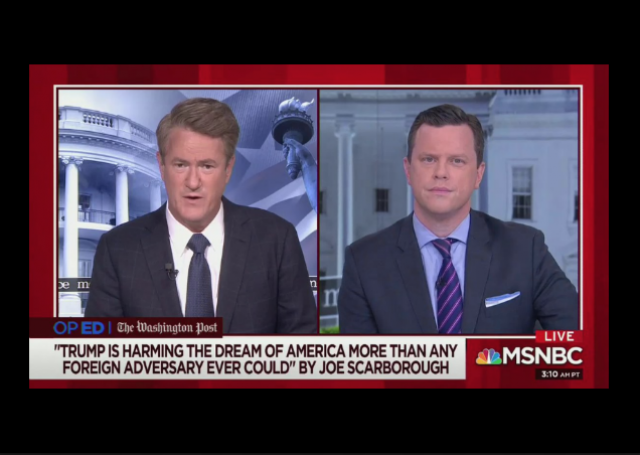 If you had “Joe Scarborough” for “first cable news anchor to compare Trump to 9/11 jihadis” today, you win!

While most Americans look at 9/11 with deep reflection and sorrow, others see it as an opportunity to score political points.

As MRC TV’s Newsbusters pointed out, Scarborough insinuates Trump has done more damage to America than the terrorist attacks that took the lives of thousands.

…Across the world, you have people looking at a country that is saying they want to ban people from coming to America because of their religion. You have just this week Brett Kavanaugh who wants to be on the Supreme Court refusing to answer whether people should be banned from coming to the United States because of their race, in his reading of the constitution. The accumulation of that, the retweeting of neo-Nazi video, Charlottesville, I can go on and on, what he said about the majority black countries, that is tearing more at the fabric of America than attacks on the Twin Towers did. We built from that, we became stronger because of that but this seems to me a far greater, graver threat to the idea of America.

Who also has the same comparison running in a WaPo op-ed today: 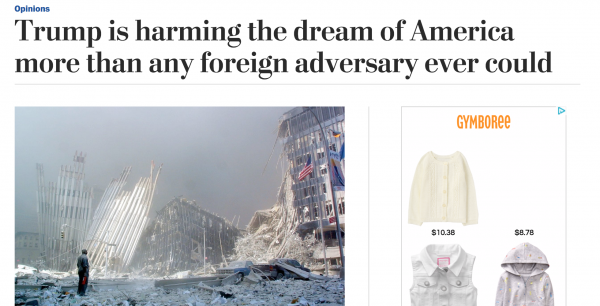 Scarborough is on a level of dumb that, no matter how hard they try, few people ever attain.

Maxine and Nancy and a whole host of Democrats wish to argue that. heh.

The likes of scarborough have become millionaires and pampered celebrities by selling out our country. You think they want the gravy train to stop?

‘Dumb’ has nothing to do with it.

The fact that Trump is actually doing well as President and America is succeeding under his leadership must be driving these dingbats mental! There is literally nothing they can do or say that can stop Trump from continuing to win HAHAHAHHAHAHAHAA

I noticed on another website (i.e. a longer quotation) that Joe wants Nikki Haley to defeat Trump for the 2020 nomination. Hm.

He is a Snoid. Lowest form of life.

notamemberofanyorganizedpolicital in reply to Elzorro. | September 11, 2018 at 4:06 pm

Presumably that is different from Al Capp’s Shmoo

Joe’s over the top rhetoric just demonstrates just how desperate these lefties are. His level of delusion is on full display!… keep going Joe!

I think it shows that when you are paid several million bucks a year to pull in eyeballs, you have a huge incentive to say anything outrageous that will pull in eyeballs.

Joe doesn’t want to sleep on the sofa tonight or for that matter for the duration of the marriage……it’s amazing how much further that woman has addled his already mentally challenged noggin.

With Confirmation Bias and continual brainwashing with this Media tripe – some Americans are living in a manipulated reality at least as cockeyed as WWII Germans.

Thousands or hundreds of thousands or even millions of Americans inhabit a Reality where Donald Trump is a greater threat than 9/11 Terrorism. And, to them, this is not an exaggeration. This is their reality.

This is not going to end well. We have the potential for MASSIVE VIOLENCE that rivals Civil War.

“America is an idea….

…Across the world, you have people looking at a country that is saying they want to ban people from coming to America because of their religion.”
___________________

America is far more than an idea. America is a sovereign nation of over 300 million people. The idea that everybody on the planet somehow has the right to come and live here is simply leftist bullshit, based on nothing more than a vapid 20th century poem by the Socialist Emma Lazarus, who had no understanding of what the Statue of Liberty was supposed to represent (which was the U.S. as a beacon of light to the world, showing other nations the way to throw off the chains of tyranny and establish liberty in their own lands — not lighting the way for the rest of the world to come here).

There was never anything in any of our founding documents that says we have an obligation to accept all who wish to come here. In fact, the U.S. constitution specifically and explicitly states that the nation was being created “to secure the blessings of Liberty to ourselves and our posterity . . . .”

The U.S. constitution doesn’t say that the U.S. was created “to secure the blessings of Liberty to ourselves, our posterity, and everybody else on the planet who thinks they would like to live here, no matter how much they may despise us and wish us dead.”

Americans have every right, and American leaders have the affirmative responsibility, to exclude from this nation foreigners who have pledged their allegiance to an ideology that is fundamentally hostile to the most basic American values, values such as freedom of speech, freedom of religion, separation of church and state, civil rights for women and homosexuals, etc.

Even an idiot like Scarborough should be able to understand that.

There in lies the misunderstanding, Islam is not really a religion, it is a cult, populated by barbarians, where people believe that they should be able maim and kill those who do not agree with them. This cult is made up with mostly low IQ people, quarrelsome people who are the way they are because of 1400 years of inbreeding. These cult members are a serious threat to other countries gene pools.

So, no we do not want them. I do think that we should be looking at picking the cream of the crop of europeans who will be fleeing Muslim barbarians over the next twenty years.

Joe is right . . . if you mean by “the American Dream” the goals of non-Americans to shoehorn themselves into the US by means fair or foul.

If you mean the aspirations of Americans (rather than non-Americans) then the President is right.

Personally, I’m with the President on this one.

It always bugs me when people say, “which begs the question…” Begging the question is a rhetorical fallacy in which one assumes a statement to be true and then uses that assumption to support an argument. Saying that “America is an idea” and then using that unchallenged assertion to support his argument is a perfect example of this fallacy.

notamemberofanyorganizedpolicital in reply to Obie1. | September 11, 2018 at 4:09 pm

Is that kinda like the FBI leaking “fake facts” to the news media, who are then used as the fake source of fakery so the FBI can then use those fake facts to get an illegal FISA warrant and violate American citizens constitutional rights?

You’re fighting an uphill battle against ignorance of philosophy and rhetoric. The government schools don’t teach that stuff any more.

Donald Trump is Hitler who wants to oppress non-whites, and everyone who supports him is a Nazi; He wants to ban peaceful Muslims; Christians are evillll racist bigots; Zionist (meaning “those other Jews”, not you) bankers secretly rule the world.

That is their platform. It’s their story and they are sticking to it.

“Brett Kavanaugh ..refusing to answer whether people should be banned from coming to the United States because of their race, the retweeting of neo-Nazi video, Charlottesville, I can go on and on, what he said about the majority black countries, “

Entitlement minded people see Trump cutting their gravy train as “racism”. How dare anyone expect them to earn their way.

Scarborough is like the proverbial pot calling the kettle ‘black.’

Joe, you ain’t Spartacus either.

“Mika! I REALLY slammed him today. Can I get some NOW?”

This is the first time since 2001 when I was pretty sure nothing was going to happen. Having all of the middle east believing Trump is a nutter is a good thing, IMHO.

Joe doesn’t realize cause-effect relationships. He fails to see that this is how he gets more Trump.

Or maybe he’s the most clever MAGA supporter… No, I’m betting he’s just dense as uranium one.

“America is an idea” is a meme intended to strip the historical culture of the US from the Europeans who founded it. The meme implies anybody could have come up with it, and therefore the majority European culture deserves no place of pride, because the idea has no necessary link or bond with that culture. Importing people who don’t care to conform to it, or even want to tear it down, is therefore ok or even mandatory.