“We have a different picture about the nature of Christianity in Europe,” Hungarian Prime Minister tells EU parliament 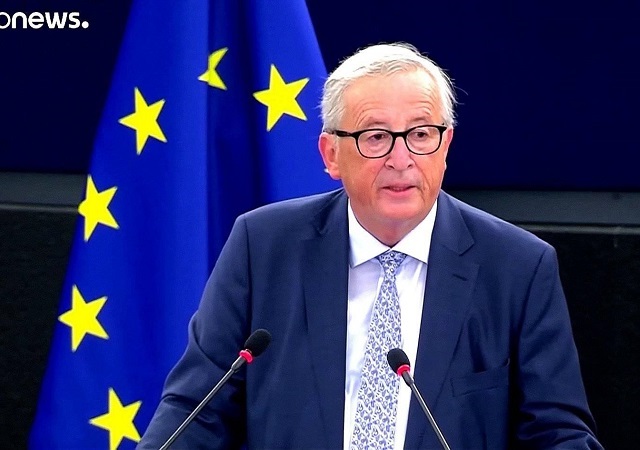 The European Union parliament has overwhelmingly voted to censure Hungary over alleged “breaches of the EU’s core values.” The vote triggered the “Article 7” procedure of the EU constitution, paving the wave for economic sanctions and other punishing measures.

The EU parliamentarians voted 448 to 197 in support of a resolution that accused “Hungary of threatening the rule of law by hampering press and academic freedoms, cracking down on NGO funding and denying rights to minorities and migrants,” European media reports said. Parliamentarians cheered and applauded at the read out of the vote. It is the first time the punitive article has been triggered by parliament against an EU member.

Ahead of the vote, Hungarian Prime Minister Viktor Orban accused the EU elite of  “abuse of power” in front of the EU Parliament. Orban defended his country’s tough border regulations to curb illegal migrant influx. “We have defended Hungary, and we have defended Europe,” he said.

The Hungarian prime minister did not hide his irreconcilable differences with Brussels. “We have a different picture about the nature of Christianity in Europe and the role of nations and cultures in our country,” he told the parliamentarians.

The only support for the beleaguered country came from Poland as the country declared its intentions to veto any attempt by the EU to impose sanctions on Hungary on Wednesday night. Warsaw is also at loggerheads with the EU over its stance on refugee intake.

Members of the European Parliament voted to censure the Hungarian government on Wednesday for eroding democracy and failing to uphold fundamental European Union values.

The measure to trigger Article 7 sanctions procedures garnered the necessary majority needed to pass, with 448 voting in favor of the motion, 197 against and 48 abstentions. The move means that Hungarian Prime Minister Viktor Orban’s government could eventually lose its EU voting rights. (…)

European Commission President Jean-Claude Juncker, who gave a speech in parliament before the vote, told DW that he had “given up” on trying to talk with Orban about his hardline policies, saying “there are big differences” between the two of them.

The move was welcomed by the mainstream European media and pro-EU activist groups. German weekly Die Welt ran an editorial titled “Orbans Defective Democracy.” The UK newspaper The Guardian backed the need for disciplinary action against Hungary, claiming “Human rights are under attack from populist and nationalist movements across the world – in Hungary, Italy, Poland, the US and elsewhere.”

Heather Grabbe, head of George Soros’s Open Society European Policy Institute, welcomed the vote and described it as a “historic stand in defending the EU’s democratic values and the rights of its citizens.”

By targeting Hungary, the EU is sending a signal to other eastern European countries opposed to open door policy towards migrants and refugees. Hungary’s Orban has been on the forefront of opposing the Brussels’ massive migrant resettlement plan. Under the “EU migrant relocation and resettlement scheme” Brussels wants to allocate national quotas for hundreds of thousands of migrants crossing European outer borders–a move bitterly opposed by Orban and his eastern European allies. Triggering Article 7 is EU’s way of forcing Hungary to accept its terms and break the collective resolve of the eastern European member states.

Hungary declines to commit national suicide, a punishable offence for the loons at the EU. Bravo Hungary, time to join the UK and get out!

I didn’t know dhimmitude was a core value of the EU.

then you haven’t been paying attention…

I don’t understand the mindset which ignores the reality of so called refugees, a reality where they have no interest in assimilation and reproduce like crazy on the host country’s dime. All the while they do their best to turn their host country into the same kind of shit hole they came from.

It seems that the creation of the EU was really about imposing cultural suicide on all the member states.

Hungexit, or Hunexit? Hungary is just across the Danube River from us. Great Place!

“breaches of the EU’s core values”

If a EU core value is to vote your country out of existence by means of Muslim replacements, then Hungary is guilty as charged.

How long until Hungary and Poland invoke Article 50?

Trade the EU. They get Hawaii and we get Hungry.

Interesting. The EU doesn’t care about the migrants. They’re going after Nationalism. Their largest fear is that countries in the EU remember their roots and want to opt out.

“Their largest fear is that countries in the EU remember their roots and want to opt out.”

And opt out they will [are].

Good thing there are SOME country leaders out there who DON’T have their head in the sand.

This is not a kumbaya moment. This is reality. Face it or lose.

Your children are more important than what the EU wants. Stay strong, Hungary.

This was a stupid move by the EU. They advertised membership as an economic bloc with one currency to compete with the US and the dollar not to enforce something as a basically sovereign as immigration control from OUTSIDE the bloc. Now that the EU is exposing itself as the complete political master of the members like US states it will make the exit of members ever more likely till it happens especially for members who don’t benefit from the Euro to begin with.

Bwahahaha… this is the Euro version of Obama’s “not who we are” bullshit. Guess what you nitwit pol? YOU don’t decide who your voters “are” or how they worship their god.

These progs are truly insane. They’re destroying their own cultures in the name of what? “Change” for changes sake? Buying votes? Unreal. This next time I say we let Europe go down in flames.

Trump should help Hungary resist the EU by providing aid and relocating some of our military bases there.

Park the military base on their south-eastern border – directly in the path of the “migrants” favorite route.

A nice bi-lateral trade deal with them would help also – on far better terms than they can get through the EU.

Time to offer Hungary their own bilateral trade deal: zero tariffs in either direction on anything, period.

We have much more burdensome entitlement and welfare state programs than they do and much more burdensome regulations so they can easily out-compete us in what they choose to specialize in, making free trade a low risk proposition for them in employment terms while their consumers gain access to the full range of American goods at much cheaper prices than the rest of Europe.

Good for us too of course, not least in that we will see a rare European political ally prosper, and prosper BECAUSE of its alliance with the values of American liberty and against the twin totalitarianisms of radical leftism (“EU values”) and orthodox Islam that are now united against us at home and abroad.

“Manfred Weber, the head of the Merkel’s Christian Democrats in the EU parliament, told Hungary to decide “between nationalism and Europe.”

False binary choice. The true choice is either to be neutered, cucked, raped, and murdered by an unrestrained islamic horde, or defend and preserve your Christian culture of free thought, free people, free markets.

We know where the oppressive, unelected politbureau in Brussels sits.

So, who or what is driving this quest for an open borders globalist empire?

“Heather Grabbe, head of George Soros’s Open Society European Policy Institute, welcomed the vote and described it as a “historic stand in defending the EU’s democratic values and the rights of its citizens.”

“Democratic values and the rights of its citizens?”

Except when the ‘democratic’ is denied, and the ‘rights’ are rescinded by an oppressive, unelected politbureau in Brussels.

What exactly is the penalty if Hungary leaves the EU? I presume it is most economic (Germany would have to invade as tourists) but I haven’t seen a reckoning of the economic problems Hungary would face.

Hungary grows food, has some manufacturing base, and its people work. So punitive tariffs would hurt, but staying in the EU and suffering sanctions for wrong-think will also hurt.

You have to suspect that Hungary’s present government has done this analysis and knows where the line is.

They get a fair amount of $$ redistributed to them from western europe.

Free trade within the EU, and free movement of people too – which allows many of their citizens to work in the west and, like foreigners here in the US, they send a lot of $$ home.

If Hungary left on its own, it would be screwed. If they leave as part of a multi-nation exodus, they’d probably be ok.

Some support from the US on trade would help a lot…

They make a lot of cars.

The hammer of tyranny is dropping in the EU. First they pass a bill that will essentially criminalize dissent online. Now they’re attacking Hungary.

If there’s a God in heaven, I hope the result of this heavy-handedness is further exits from the union and its collapse.

If I were Orban, I would start a national military buildup. We already know none of the other members have a military worth a damn, and somebody has to punish these traitors.

But, the EU’s threat to Hungary is not military, it is economic. If Hungary does not comply with EU directives, foreign companies could find it significantly more expensive to locate their facilities in Hungary.

Hungary won its freedom – finally! – after the wall fell and the Soviet Union crumbled. Before that they had to endure from the heavy oppression of Soviet dictators. They know what oppression from an overly controlling external source is.

I hope they have a referendum and vote “leave”……and that many MORE nations, like Poland and Czech Republic, for example, stand up to this tyranny, which is becoming more and more like the very thing fought against and had to endure for decades.

Brexit, Fruckoff, Italeave, Hungarout, and Poleave should all happen. Leave Germany holding their own bag of doggy do-do. Get out of the EU and deport all invaders to Germany.

The irony is that Viktor Orban is enormously popular in Hungary at a time when many of the EU’s national leaders have dismal public-approval ratings.

Apparently respecting the will of the people is not an EU core value.