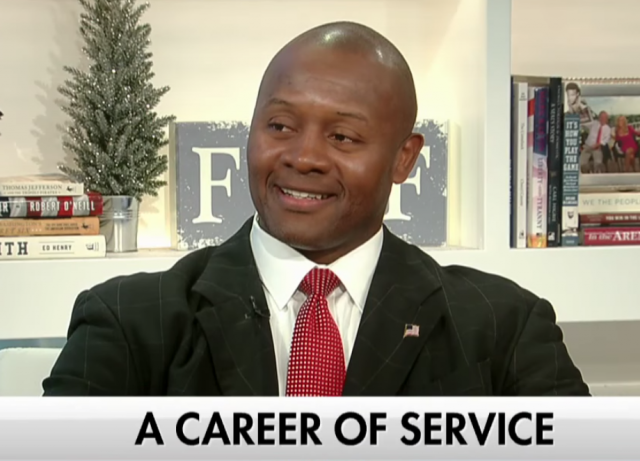 Yesterday New Hampshire had a primary, and Eddie Edwards won the GOP nomination for the US House of Representatives from the state’s 1st Congressional District:

Eddie Edwards, who was endorsed by Trump attorney Rudy Giuliani, defeated six Republican opponents in the 1st Congressional District, which covers the eastern half of the state. A Navy veteran who also served as enforcement chief for the state liquor commission, Edwards is the second African-American to be nominated to a U.S. House seat in New Hampshire.

The NY Times had this to say about the Democratic and Republican nominees:

In the 1st District, Executive Councilor Chris Pappas won Tuesday’s 11-way primary race for the Democratic nomination, beating a former Obama administration official who had raised more money than the other 10 candidates combined…

Pappas, who is gay, is a former state lawmaker who is serving his third term on the governor’s Executive Council, runs a family restaurant in Manchester and has the backing of key Democrats including the state’s two U.S. senators. He told supporters Tuesday evening his campaign will be about decency, unity and progress…

Eddie Edwards, who was endorsed by Trump attorney Rudy Giuliani, defeated six opponents on the Republican side. A Navy veteran who also served as enforcement chief for the state liquor commission, Edwards is the second African-American to be nominated to a U.S. House seat in New Hampshire.

One thing for sure is that this election will break the all-female lock on New Hampshire representation in Congress. New Hampshire is a tiny state, not only one of the smallest in the nation (population about one and a third million people) but one of the whitest at 95% (exceeded only by its more liberal sister states, Maine and Vermont) and one of the least black at 1.22%. I would wager that most of the black population of New Hampshire is Democratic rather than Republican, although I certainly don’t know.

And yet Edwards won the GOP contest handily, getting 48% of the vote (almost half) in a crowded field. That’s impressive. Edwards was helped by the fact that Giuliani endorsed him, which makes him Trump-backed by proxy.

Edwards has a chance of winning, but I don’t know how big a chance. The 1st Congressional District of NH (there are only two in the entire state, by the way) has been traded back and forth between Democrats and Republicans for many election cycles. His Democratic opponent Pappas is a young man who grew up in New Hampshire and is from a prominent restaurant-owning family in a big population center in the state, which should make him a strong contender.

I hope a lot of money gets put into this race by the GOP national organization. It might pay dividends in a year when every seat counts.

How about we stop with the “first whatever” or “second whatever”. That has gotten old over the past 50 years.

How about the first Eddie, to acknowledge that he is more than a colorful clump of cells that is interchangeable, recyclable, disposable.

The first bald dude to own both a poodle and a bulldog is noteoworty.

There are way, way, way more of ‘us’ out there than the fascist left can imagine.

And to the horror of the fascist left: we come in all shapes, colors and sizes.

That’s right. I am more than a colorful clump of cells. Eyes up here.

Speaking of diversity, I wonder if White Hispanic-Americans will join in a class action lawsuit seeking equal (not “=”) treatment from diversity businesses and organizations not limited to Harvard.

I wonder how long he has been in NH. Does anyone know where he is from?

This must be from the Onion. Everyone knows that Rs are racist and hate black people and would never vote for them, no matter how qualified. /of course its sarc/

I saw a nice young fellow* on the Outnumbered show earlier in the week, John James. He is running for the Senate in Michigan. Fprmer Army officer (Ranger and pilot), West Pointer, Iraq combat vet, now running his own business.

I hope this will become a trend. It could seriously impact the racial demographic that the Ds have reied on for decades.

*I am of the age where most everyone on the national scene qualifies as a “young man” or “young woman”.

That’s a political myth told by Pro-Choicers, selective, opportunistic, and politically congruent (“=”). In fact, the human rights leaders of emancipation, are the civil rights leaders opposed to diversity and color judgments in general.

You must be on the Left side of politics, your post is a confused collection of terms without a grammatically correct structure.

I don’t care if a candidate is black, white, or glows in the dark.

I don’t care what his religion is . . . as long as he doesn’t insist on telling me all about it.

I don’t care where he’s from, be it the ice caps or the infernal regions, as long as he’s an American now. (Not a Something-American—a plain ol’ American, with no qualifications tacked on.)

None of this crap is important, and I don’t care.

But it seems that I’m not allowed to not care.

The Left won’t allow it. I know about that.

But neither will the Right.

It’s all Identity Politics, All The Time. And from all sides. It’s getting annoying.

I don’t care either. What matters—of course—is the quality of the person. Edwards seems like a quality person, from what I’ve read about him.

BUT, as you said, the Left won’t allow us to not care. As long as they paint the right as bigoted racists, and convince other people that this is so, we need to care in the sense that the success of a candidate like Edwards in the GOP, particularly in a state like New Hampshire, can help to reveal that the bigotry accusation is a lie.

But it seems that I’m not allowed to not care.”

This is a war. And as in all wars, the enemy sets the terms of engagement. We may wish it were different, but it is not. We do not fight on the battlefield we wish we could have, but on the one where we stand.

If I could I would up vote your comment a million times! This – we are all Americans, not hyphenated Americans, at least that’s what my parents (immigrants) instilled in us and what we taught out children and grandchildren!

They need to keep the pro-pot part of their base solid. Too bad Republicans don’t want the pot vote.

We are making war on 10% of the population. They are very motivated to vote. Just peeling 1/2 of them off would be significant.

Most R’s in NH don’t care about pot one way or the other. There is a streak of “gateway drug!” but if we were serious about it, we should be regulating/taxing alcohol more. But, then again, when the state runs the liquor cartel, why would they cut off their cash cow? The state system is loaded with contradictions and hypocrisies from both sides, but it is what we have. As long as there is no state income tax or statewide sales tax, it will remain one of the best states in the Union.

He resembles a young George Foreman.

He deserves to step into the political ring and take his best shot.

To answer a question above, Eddie has lived in NH for 30 years. Raised his family here. He’s was born in GA, raised by his grandmother. Joined the Navy as a teen. He had a tough childhood, but was blessed to have his uncle and grandmother as role models. He’s a top notch person with integrity and solid values. Very involved with veterans issues, as well. I live in his district and have known he and his wife personally for many years. His opponent is from Manchester, prominent family, liberal Dem, etc, but he beat the other frontrunner partly because she just moved to NH a year ago just to run in CD1. We’ll see how he does in the general, but I think it will be a tough race for both candidates.

Yeah, and all 1.22% is Republican and running for Congeesss.