“Our sales dropped 40 percent the next day” 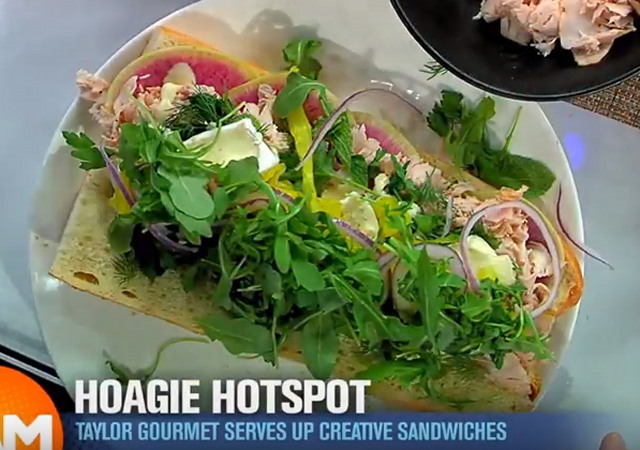 A hoagie sandwich chain called Taylor Gourmet, which first opened in Washington, DC and then expanded to locations in Chicago, is closing this weekend.

While many reasons have been given for the closure, insiders say the chain suffered a massive drop in sales after it became known that the owner had a meeting with Trump.

Jessica Sidman writes at The Washingtonian:

Hoagie Chain Taylor Gourmet Will Close All of Its Stores

Taylor Gourmet will close all 17 of its DC-area stores after Sunday, September 23. Friday is the last day for the hoagie chain’s two Chicago stores. The closures come as Connecticut-based private equity firm KarpReilly, which infused Taylor Gourmet with a reported $5.6 million investment in 2015, pulled out of the company. Owner Casey Patten declined to comment, but a spokesperson confirmed the news. Representatives for KarpReilly were not immediately available for comment.

Multiple sources familiar with the company tell Washingtonian that a Chapter 7 bankruptcy filing is imminent. Nothing has been filed yet, and a spokesperson declined to comment on a potential bankruptcy.

Patten cited rising real estate prices and increased competition as reasons for the closures but this is the part of the report which jumps off the page:

However, three people familiar with the company say sales began to decline after owner Patten met with President Donald Trump at a small business roundtable at the White House in January 2017. Facing backlash and calls for boycotts, Patten told the Washington Post that he’s apolitical when it comes to business and pointed out he also participated in a roundtable discussion with President Barack Obama in 2012. The restaurant posted a “Less Politics, More Hoagies” sign at its Chinatown shop.

“Our sales dropped 40 percent the next day,” says one source who spoke on the condition of anonymity. “And it persisted and never really got any better.”

Taylor Gourmet to close all locations by Sunday

The chain’s sudden closure comes after its majority owner, private-equity firm KarpReilly, pulled out of the company, according to two people familiar with the deal. The Connecticut-based firm, which owned 75 percent of Taylor Gourmet, was reported to have invested $5.6 million into the chain in 2015, helping fuel its rapid expansion throughout the Washington area. Representatives for KarpReilly did not respond to multiple requests for comment, and the Taylor Gourmet spokesman said he did not know why the firm had chosen to walk away. The two co-founders own the remaining 25 percent…

The sandwich chain has become something of a local favorite among politicos and Washington insiders. President Barack Obama was a regular at Taylor Gourmet, where he once hosted a roundtable discussion with small-business owners to discuss his administration’s policies. He and Vice President Joe Biden also famously picked up lunch at the chain’s Pennsylvania Street NW location during the 2013 government shutdown, drawing hoards of onlookers. (The chain was offering furloughed federal workers free cookies and 10 percent off their orders.)

These tweets from 2017 will give you an idea of what happened:

The man next to Trump is @TaylorGourmet co-owner Casey Patton. Giving Trump a photo-op as Trump slams the door on immigrants. https://t.co/wyYAzkdT0P

Casey Patton of @TaylorGourmet is there to support an order weakening health, safety, and labor rules. https://t.co/B3Ugxwun7a

So this is not “apolitical.” Casey Patton and @TaylorGourmet will profit from Trump’s order. He looks happy about that. pic.twitter.com/CebKOkmqh2

It’s a shame they’re closing. It looks like they made great sandwiches:

The problem is that he’s smiling in the picture and looks happy to be there. If had produced a scowl……….

Sounds like rubbish. Headlines screaming that the chain has been caught kidnapping customers, chopping them up and serving them as side orders wouldn’t cut sales by that much in a day. Three days, maybe.

The only thing which would cut sales by 40% in a day would be the Board of Health closing 40% of their locations.

Unnamed “sources” can accomplish miracles. But they aren’t real.

Tom, did you check for health code violations?

And you know this because of what studies or experience in this business in DC?

So flaming liberals cost how many people their jobs? Not just the restaurant employees but the whole chain involved from the field to the table.

Why do liberals hate employed people?

Hoagies came from Philadelphia. A proper hoagie does not have lettuce.

So… cultural appropriation then?

So, Democrats prefer that an American business shut down rather than its owner do what is right for his business and his countrymen.

Democrats prefer that Americans be unemployed and on welfare just so illegal aliens can roam freely all across the fruited plains.

2 things… A business can’t claim to play with both sides… not in DC.. not in the major Democrat cities. Nope. If someone dug a bit, the culprit may be at the investment house… they changed their risk portfolio.. they have to cover other investments poorly made.. or the board is tired of pressure at every party they go to.

Who knows. DC is a Democrat and K-street run town. This place pissed off the intolerant. Sad.

Saying KarpReilly “pulled out” makes no sense. Private equity firms don’t get to cash out, nobody would accept private equity if they could demand that. They go down with the ship like everybody else. At best KP as majority shareholder could force bankruptcy and/or liquidation.

If Trump really can cause business failures like this he should visit all the Democrat-owned businesses he doesn’t like and then tweet about it. The Democrat mob will do the rest.

So Dems did to a sub shop what they did to Kavanaugh.
Seems like it’s gonna be civil war soon.

They went bust because their sandwiches cost $13 a pop and there is not one thing special about them. Add a side for $4, and with a drink and taxes you likely get a sandwich for $22. Woohoo!!!

Most of the sandwich shop’s clientele were obviously Baracky Obammunist’s men.
DC’s population needs to be dropped another 40 per cent. Kalorama’s most famous occupant needs to be evicted.

Reminds me of the Vegans who talk about eating Pizza, although a cheese-less crust covered with walnuts and carrots isn’t a pizza in my book. Was the sandwich depicted in the picture named “the foo-foo” because that is the word which comes to my mind? If it doesn’t precipitate a cardivascular incident, it isn’t a hoagie. Damn those health conscious people and their cultural appropriation. 😉

Having owned restaurants … I have my doubts that his meeting with Turnip was that influential.

Sounds to me as though the original customer base was liberal Democrat. The mistake may have been confusing the politics with the government position.