No, Chicago is not any better under Emanuel. 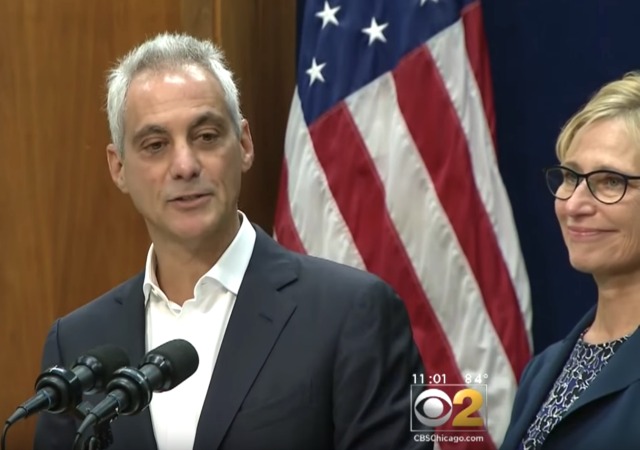 Chicago Mayor Rahmn Emanuel has announced that he will not seek re-election next year after eight years in office. He has already raised $10 million towards a third bid.

He said that he and his wife Amy want to write a new chapter in their lives as all three of their children have now entered college.

Emanuel served as President Barack Obama’s chief of staff before he became mayor in 2011. Obama released this statement:

“As a mayor, a congressman, and my first White House chief of staff, Rahm Emanuel has been a tireless and brilliant public servant,” Obama said in a statement.

“His work to improve our schools is paying dividends by helping our teachers and students achieve faster academic improvement than students in 96 percent of America’s school districts,” Obama continued.

“The announcement to establish universal pre-K in Chicago, on top of universal kindergarten, will give all our kids the best possible start. And his implementation of debt-free community college will help prepare all our young people for the new economy,” he added. “With record job growth and record employment over his terms in office, Chicago is better and stronger for his leadership, and I was a better President for his wise counsel at a particularly perilous time for our country.”

“I’ve been blessed to call Rahm my friend,” Obama said. “Whatever he chooses to do next, I know he’ll continue to make a positive difference, just as he has throughout his career in public service. And Michelle and I wish Rahm and Amy all the best as they consider this next phase in their lives.”

Yeah, this former Chicagoan doesn’t agree that Emanuel has made the city better or stronger. I guess Obama forgot that he closed 50 schools in 2013. The Chicago Tribune released a report this summer that detailed how the Chicago Public Schools failed to protect students from sexual abuse. Let’s not forget the record high property taxes to fund the depleted police officer pensions.

Chicago still has a high murder rate with blood staining the streets every weekend. It’s gotten so bad that The Chicago Tribune has been tracking every shooting in Chicago since January 2012.

The most violent weekend of 2018 occurred in the beginning of August where violence led to the deaths of a dozen people and left 62 more injured.

Challengers to Emanuel amped up criticism towards the mayor after that weekend, including former Chicago Public Schools CEO Paul Vallas:

Vallas accused Emanuel of allowing the Police Department’s detective division to be “gutted through attrition” and moving officers around to various areas of the city for “political reasons” instead of strategic ones. Both of those help contribute to spikes in crimes and the city’s dismal rate of solving murders, shootings and carjackings, Vallas said.

“What happened over the weekend is absolutely horrific and unacceptable. It’s another tragic weekend in Chicago, and unfortunately, we’ve had too many of them,” Vallas said while announcing a plan to rehire retired detectives. “There is no substitution for providing the police resources we need to close this gap, because unless you get these killers off the streets and these shooters off the street, you’re going to continue to have weekends like this into the future.”

Activist Ja’Mal Green slammed Emanuel’s “failure to properly invest in economically downtrodden neighborhoods on the South and West sides.” Green wants to see more jobs and development in the neighborhoods that witness the most violence:

“Look around. We have vacant lots. Everything is boarded up. These are neighborhoods that are looking for real investment,” Green said as he pointed to the intersection of 78th Street and Halsted Avenue in Auburn Gresham. “We have boarded-up schools, boarded-up businesses, and they’re knocking down houses and no plans to redevelop them. So what type of hope are you giving to these communities? There is no hope in these communities. People are in survival mode.”

The decision also comes as the trial of Chicago police officer Jason VanDyke begins. He is on trial for the murder of Laquan McDonald that happened in October 2014:

For most of 2015, Emanuel fought in court not to release police video of the shooting, arguing the matter was still under investigation. When a judge ordered Emanuel to release the video in November 2015, then-Cook County State’s Attorney Anita Alvarez filed murder charges against Van Dyke on the same day Emanuel made the video public.

The controversy led to to a federal civil rights investigation of the police department, accusations of a City Hall cover-up and weeks of street protests that called for Emanuel’s resignation. It also resulted left Emanuel saddled with deep unpopularity among African-American voters, a demographic that he performed strongly with in his prior to campaigns for mayor.

I listed a few people above that have jumped into the mayoral race, but there are a few more. None of them have the name recognition like Emanuel or Daley:

Rahm uttered one truth about lack of morals being behind the constant violence in his city and all hell broke loose. As a liberal, he spoke the unforgivable truth. He exits stage left.

You would think Republicans with their superior understanding of history would get it.

This sets up nicely for a Lisa Madigan. She’s from a well connected Illinois Dynasty and she’s only 52.

I’d be shocked if she ran. I think she is biding her time to run for Gov. she protected her adoptive father as AG. She can’t do that as mayor.

“”These are neighborhoods that are looking for real investment,” Green said””

Yeah, business is bad in the armed robbery field. Get the crime rate down, and businesses will show up.

I have mentioned growing up in Flint Mi, and leaving when I was about twenty, taking businesses I started elsewhere, never to return.
Flint residents,those who turned the city into one large ghettos, constantly whine about lack of large stores, those which have better prices. The problem is probably a 20% inventory shrinkage, and the need for 24 x 7 security, and sky high insurance costs. The city could wave all taxes and locating a business in the city would still not be viable for most.

They should start allowing honest hard working people to carry machine guns, and if they take someone out, that person’s rap sheet should serve as a get out of jail free card 🙂 Yes, this is sarcasm. It is really hard to see how a place like Chicago or Flint can be salvaged short wild west type justice.

Machine guns were outlawed (generally) at the end of the last Prohibition.

Guess what they are doing with the results of this Prohibition?

Obama and Ralm it takes two terms to really screw it up!

How to fix the crime problem. Go back to broken windows policing.

Donald Trump has the answer. He had it 28 years ago.

Rahm is moving on to bigger and better things.
CNN perhaps?

The Chicago murder rate is high in 2018?

I wonder what was the cause then?

What is the cause now?

The parts of Chicago with high murder rates and failed schools are ungovernable due to identity politics.

No one of any party can actually fix it in the current kafkaesque environment of identity politics.

If you strictly enforce the law you might reduce murdrer rates, but you’ll be excoriated as a racist.

If you enforce tough academic and behavior standards for public school teachers and students you might improve the schools but you’ll be excoriated as a racist.

Every large urban black population has high murder rates and low academic performance due to a disfunctional black subculture. Identity politics demands that the outcomes be blamed on “institutional racism”, which is means the real problem is never addressed.

In reference to comparisons of the Chicago murder rate during 1920-1933 alcohol prohibition and todays drug prohibition warfare. Back in the twenties the murderers were competent with their firearms and planned their crimes. I would venture to guess many received military training during WWI. Todays killers are for the most part semi- literate teens who are content to drive by in a car whilst spraying rounds into a neighborhood. The rate of innocent bystanders beiing killed is horriffic. Every weekend some poor citizen is killed just because they were in the wrong place.

Does anybody remember when Obama said “black men have to step up and be better fathers?” Jesse Jackson threatened to castrate him. Now the inner city south and west sides are reaping the rewards of living on the Jackson Democratic plantation.
Their response is to march on Wrigley Field, close down streets in a effort to draw attention to their self inflicted plight. All the while for the majority of blacks refusing to even consider that their licentous lifestyles are greatly causing their children to murder or be murdered. Or they wont admit it publicly.
I drove Uber on the south side for a while and I saw and heard first hand from more than one young mom how she cohabitated for years with a man who impregnated her multiple times, woke up one morning, left and never came back. Now they have to work while leaving the kids at home alone. I listened to this scenario more than once.
As much as I dislike Rahm; he was %100 correct in his assessment as to the lack of morals in certain elements of black community. But a white man can never say these things lest he be accusedvof being racist. As for me I am a racist in the sense that I have been watching Chicago blacks muder each other for over 50 years and quite frankly I am loath to have anything to do with them lest they shoot me. After all if they murder their own neighbors with stunning regularity a old white guy like me would be a feather in the cap.

The “War on Drugs” has been a complete success in the sense that the pols in charge back in the day like Harry Anslinger initiated it with the intention of criminalizing people of color.
Trump would do well to remove marijuana from the DEA schedule one, that lumps it in with heroin and cocaine as dangerous drugs. Why this is so difficult is beyond me. Or better yet order Sessions to do it and if he refuses-fire him and do it anyway. Winwin.

The issue is black subculture, which is built around bastardy, government handouts, and affirmative action. Good police and court enforcement of laws can really help things and reduce the benifits of being a thug or a ho. Rahm is incompetent, so he could not ensure the latter. Instead, he makes concealed carry even more difficult, thus leaving law abiding citizens as sitting ducks. Whites flee, as expected. Illegals, including lots of illegal Muslims, come in.

Things will get much worse soon enough.