Citing just about every policy decision Trump has made thus far 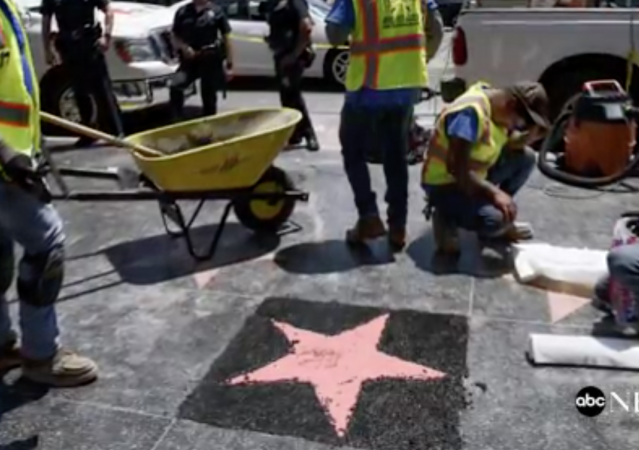 The most Hollywood thing to have happened has happened in West Hollywood. The municipalities five-member city council approved a proposal to remove Trump’s star from the Hollywood Walk of Fame.

They claim vandalism and demonstrations are the reason behind their decision. And also Trumps “treatment of women and his views on climate change.” Oh yes, and there’s also the “decision to withdraw from the Paris Climate Agreement, a ban on transgender military officers and the separation of families at the U.S. border with Mexico, among reasons for the removal.”

The city of West Hollywood approved a proposal to remove President Donald Trump’s star from the Hollywood Walk of Fame on Monday, citing recent costly vandalism and recent demonstrations around the star.

West Hollywood’s five-member city council passed the measure unanimously on Monday evening, allowing it to move forward with a request to remove the star, which has been vandalized several times since Trump took office last year.

Brought forth by West Hollywood council members John D’Amico and Lindsey Horvath, the proposal cited the president’s treatment of women and his views on climate change as catalysts.

Austin Clay, 24, recently took a pickax to Trump’s star, hacking it up beyond recognition. And he’s proud of himself.

Clay turned himself in the following day.

If only we could remove California’s star from the flag.

How about we hire 3-4 times as many ICE agents for California and make them pay for them?

I dislike this mix up of red and blue colors for states. “Red” has always been the hallmark of communism. California is a red star rising in the west. This action just adds to the list of things to despise about the PDRK. The old guard (white and black) Dems should begin to sense that the shift far left will swamp them…. useful idiots to be discarded in the long march to eventual communism. The radical minorities will brand them fascists also and they will be silenced.

All the commies will be fed to the hogs long before that happens.

IIRC, we have the late Tim Russert to thank for the color assignations. I believe he (rightfully) thought that color red, and its communist connotations, would have just been too easy a joke to be told.

I guess pink was right out too…. 😉

But blue is the color of depression (psychological and economic), so maybe it isn’t so far off after all…

Here’s how it happened.

The degree of pettiness is amazing.

I voted in the primaries today, no Dems.

Maybe their votes are still in some staffers trunks and will surface later…..

Sorry, but Donald Trump isn’t Sally Fields, so he doesn’t give a crap if Hollywood loves him.

I noticed Trump has been 1:1 and 1 to many with black preachers (sounds like lots of them). He’s listening to them and trying to win those he can /hasn’t.

Who is the left trying to win over?

“Chamber of Commerce would have the final say in removing the star.”

Which is as it should be. The Chamber is a private organization; Hollywood’s City Council is not. Trump’s Star is a form of political speech; thus, I’d expect government to remain neutral on who does or does not deserve a Star.

Since the star precedes his Presidency, the star may be indeterminate as to political speech. Now that is up to the C of C… which is not in Trumps corner on immigration. I bet the C of C goes with the LGBQWERTY on this one.

No excuse to show hatred is too petty. No demonstration of hate too extreme.

Welcome to the politics of the party of tolerance and inclusion.

“Austin Clay, 24, recently took a pickax to Trump’s star, hacking it up beyond recognition. And he’s proud of himself.”

Hey, maybe Austin, TX could rename itself after him instead–and they wouldn’t even have to change the name!

An astronomer ought to select a highly visible star in the heavens and nickname it “Trumps Star.” Let’s see them damage, let alone try to remove, that one.

Another symbolic action of almost no consequence but which makes ideologues so self-proud.

Remove. Who will notice. Who will care. Replace it with a star for Che Guevara. Eh?

The Meme on the Trump Walk of Fame that I saw a lot on Tuesday read:

Hollywood is removing Trump’s star from the Walk of Fame.

His name shouldn’t be associated with pedophiles like Kevin Spacey & rapists like Bill Cosby in a perverted place that gives prostitutes like Stormy Daniels the keys to the city.

As is noted at several other forums, the West Ho’wood city council didn’t vote on whether Bill Cosby’s star should be removed. Because, as the Instapundit notes, they’d rather support a rapist than a Republican.

Ditto Kevin Spacey’s star. Because the city council would rather support a predator than a Republican.

Ditto Harvey Weinstein’s star. Because the city council would rather support another predator than a Republican.

We could go on, of course, and perhaps someone should…

I, for one, have never seen the “walk of fame”. Trump ought to be thrilled to be dissociated from the creepers who foisted such a trivial Hollywood marketing ploy.

Haha, and if he gets an itch to get even… let him buy the stretch of property where the “walk of fame” is located and put up a hotel, golf course, shoe shine stand or coin operated laundry for those “stars” started off and ended up where they came from.

Haha, who was the actress who burns her underwear rather than having TSA or whoever examine her baggage? Renee Zelweiger? She was pretty good in Stone Mountain or something like that. I don’t really go out to movies, anymore. Too loud, too expensive and the audience is not really the sort of folks I would want to be with, outside of the theater.

A real place, hiked up and around it many times. The book was the first work of an outstanding author from NC.

The movie was very true to the book itself, and Zelweiger was outstanding.

Over 40 years ago I designed some 1000 watt vacuum amplifiers which were used for large outdoor concerts, so today my hearing leaves much to be desired. In spite of poor hearing, movie theater commercials are so lout that I started taking ear plugs, and then I stopped going all together. They have been going out of business like crazy. No loss.

The sh-thole of west hollywood doesn’t control the Walk of Fame: the city of Los Angeles does.

Call the idiot mayor of LA (Garcetti) and tell him not to support fascism and censorship:

The funny thing is that it’s not up to them. The stars belong to the LA Tourist Board, so the West Hollywood council voting on whether one should be removed makes as much sense as would the NYC council doing so, or the readership of Legal Insurrection.

Trump should hire some big bruisers, dressed up in cowboy garb, to guard his star. Not because the star is especially important, but to get video of leftist morons assaulting and then getting their buts kicked.
Then put up a website, LibsUnhinged.com to give the idiots who respond to the bait recognition.