DeVos is rich, so she must be an awful person, right? RIGHT?! 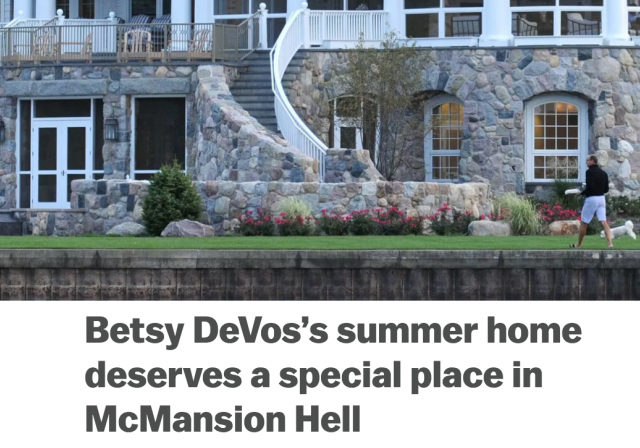 Secretary of Education Betsy DeVos comes from a wealthy family and was independently affluent prior to joining the Trump administration, so clearly, she’s probably a terrible human being.

Wagner runs McMansion Hell, a hilarious blog I thoroughly enjoy. An architect, Wagner mocks mansions nationwide proving again and again that copious amounts of cash aren’t indicative of a good, or even decent sense of style. And for all the money some of these people spend decorating their gianormous abodes, you’d think they’d use something a bit more dazzling than boring ol’ beige, but it’s their money to spend on ugly decor if they so choose.

Anyway, on McMansion Hell and subsequently (or maybe firstly at) Vox, Wagner dissects the DeVos’s Michigan mansion. Were that it was only a post mocking the mansion’s appearance (which is unquestionably a hodgepodge) because, on those points, I completely agree. Buuuut it lost me at the various jabs at DeVos for having money.

My mission for the past three years as the creator of the architectural humor blog McMansion Hell has been to unpack what makes mansions like DeVos’s so terrible, from both an architectural and social standpoint. It’s bad enough that we have a president who oversaw a massive redistribution of wealth toward the already wealthy through tax breaks. What’s worse is that obscenely wealthy people like him waste all their money building pseudo-castles and other eclectic tragedies, all while wagging their finger at the rest of us telling us to eat cake.

Trump official and fellow rich person DeVos just rolled back Obama administration loan forgiveness rules for students defrauded by for-profit colleges. It’s unsurprising that she doesn’t want to forgive the student loan debts of those defrauded by for-profit colleges considering that she got her net worth of more than $1 billion from her husband’s company, the multilevel marketing giant Amway, which is often described as a cult. Meanwhile, her brother Erik Prince owns the Blackwater firm, which essentially sells mercenaries. As we can see, we are not dealing with nice people.

While the repairs are underway on one of her 10 boats, maybe poor Betsy can spare some of her precious time (otherwise spent being the villain of a Charles Dickens novel) reading essays like M.H. Miller’s in The Baffler, which describes in detail the toll student loan debt repayment takes on working families. Or she could take a gander at a recent Time article about how an entire generation of people have negative wealth.

In America, the rich get richer, and the poor have to beg the federal government to forgive the debts they owe to predatory for-profit colleges run by the rich who keep on getting richer. What do the rich do with all their money? Build horrific monstrosities with eight dishwashers and dismantle the public school system.

I mean, she talks about dismantling the completely dysfunctional and disfigured public school system like it’s a bad thing and suggests the government (who btw, created the higher education bubble) should instead support those who chose to go deeply into debt to pay for degrees for which their subsequent earnings did not match.

There’s also a trite assumption that because someone is wealthy and indulges on a few luxuries, they’re completely devoid of empathy or care for the plight of the less fortunate. It’s shallow, lazy thinking.

DeVos has been subjected to so much vitriol as Education Secretary that the US Marshalls recommended additional security, so I’m glad she has a castle where she feels safe from the crazies who wish her harm, regardless of how tacky and unpractical it might be.

I dunno. Did she inherit wealth, did she marry wealth, or did she make it herself. Obama is wrong–there are lots of people who “made it themselves”.

In any case I don’t give a flying buffalo chip how she came to have money. I’m more interested in what her policies might be.

I dunno. Did she inherit wealth, did she marry wealth, or did she make it herself. Obama is wrong–there are lots of people who “made it themselves”.

In any case I don’t give a flying buffalo chip how she came to have money. I’m more interested in what her policies might be.

The only thing that matters about DeVos, is she doing the Job!…in my opinion that’s a YES!

Aw shucks–I posted twice. I guess I can say that again!

Betsy DeVos has done…and will do…much more to lift kids out of poverty and improve our grossly dysfunctional government monopoly education system than the top two dozen “community organizers” you could list.

Kate Wagner is not “wealth shaming” DeVos. Instead, Wagner is exhibiting her covetousness, her envy, her greed. The point of her comment on DeVos’s house is that Wagner doesn’t have what DeVos does and Wagner is jealous. She is burning with envy; she covets what she can’t afford. Given the chance, Wagner would take DeVos’s property.

Let’s call “wealth shaming” what it really is and apply this to it—Thou shalt not covet thy neighbor’s house….

Well, The governor of the state I live in recently went on vacation to his mansion on Lake Como in Italy.
Of course Vox will probably say that Phil Murphy deserves that mansion for all of his years of hard work at Goldman Sachs…

So, do they have hot exposé photos of under-the-table illegals crawling over that lawn, clipping it with scissors? If not, I’ll give the proletarian outrage a pass.

The pursuit of life, liberty, and as much gaudiness as you can honestly pay for is what America’s all about.

Then, Bernie Sanders, the Democratic Socialist.

you could redeem Teddy’s beer cans after a weekend binge and pay for a charter school for a year!!

What about the mega wealthy tech titans? Yeah, yeah, I know. Because they’re lefties . . .

People like this are such jokes (or simply propagandists – or both).

Has she looked at Gigolo John Kerry’s house? Or Odumbo’s house? Or hillary klinton’s house (and its bathroom server?) Or one of the Useless Kennedys houses? Or some hollywood idiot’s house?

No one is this stupid. Then again…

I do not begrudge the luxuries enjoyed by the rich and/or famous. I am concerned with a conservation of principles. Reconcile.

I don’t mind people living in big houses as long as they don’t lecture “me” about “my” environmental impact when they are burning 20X as much evil carbon. Or maybe their true point is that I should limit my consumption so that they can use more. I do have a friend who tells me not to speak evil of the Prius because without it keeping gas prices lower, he wouldn’t be able to afford to drive his suburban.

I am so confused. I see the Left constantly attacking Trump and his tax breaks because they unfairly gives the rich all sorts of breaks and does little for the average person. Then I later see the Left condemning the Trump tax package as being unfair because it put limits on the home mortgage deduction which unfairly targets the rich.

as it has been said many, many times before if the left didn’t have double standards it would have no standards at all.

I have one word for outraged Democrats.

I must have missed the article about the Clintons and the Obamas, all of which have NEVER had a real job, no inheritance to speak of and are multi, multi millionaires. What’s up?

I graduated HS and went to university before there ever was a federal dept. of Edu, and I received a very good education – as did tens of millions of other students pre-1979.

Since the invention of the federal dept. of Edu, the quality of education in the USA has spiralled down as the costs have sky rocketted.

Tell me again why this malignant suck hole of incompetence shouldn’t be abolished??

Student loans, private and for-profit, must be dischargeable in bankruptcy, or otherwise made less toxic to young immature persons, to society and to teh fininacial and acedemic communities.

Kate Wagner is free to be as poor as she wants. As for the rest of us, America was founded on the idea of individual liberty, which includes the liberty to become rich. Or to inherit wealth. Or to marry it. Kate Wagner can go pound salt.