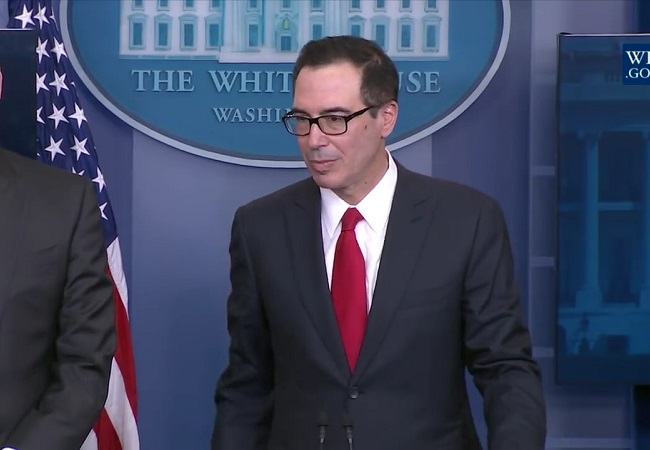 The United States has imposed sanctions on Chinese and Russian companies for violating the trade restrictions on North Korea. The move highlights President Donald Trump’s strategy to keep tightening the screws on Pyongyang over its nuclear program.

“Treasury will continue to implement existing sanctions on North Korea, and will take action to block and designate companies, ports, and vessels that facilitate illicit shipments and provide revenue streams to the DPRK,” Treasury Secretary Steven Mnuchin said Wednesday. “Consequences for violating these sanctions will remain in place until we have achieved the final, fully verified denuclearization of North Korea,” he added.

Those shipments helped fuel what the Treasury alleged was a huge “illicit” cigarette trade earning the Pyongyang regime US$1 billion a year.

Also named was Profinet director general Vasili Aleksandrovich Kolchanov, whom the Treasury said “was personally involved” in deals with the North Koreans.

The US Treasury’s move comes less than two months after President Donald Trump met with North Korean dictator Kim Jong Un at a summit in Singapore, which resulted in a diplomatic thaw in relations between the two Koreas. Though Pyongyang agreed to halt its nuclear program and missile tests, Trump’s administration insists that economic sanctions will remain in place until the regime fully dismantles its nuclear and missile programs.

China and Russia have long been on Washington’s radar over the breach of North Korea sanctions. In July, US Ambassador to the UN Nikki Haley directly called out both of the countries while stressing the need to keep up the pressure on the Communist dictatorship. Beijing and Moscow “want to go around the rules” to aid North Korea and risk derailing negotiations over the regime’s nuclear program, Ambassador Haley said.

Given the authoritarian structures prevalent in these two countries, it is highly improbable that private sector players had been operating without the connivance or tacit approval of the ruling establishment. Besides minor economic gains, Beijing and Moscow could be hoping to drag the US into protracted negotiations with Pyongyang, diverting Washington’s attention away from their unfair trade practices and territorial expansionism.

Unlike the Obama administration’s approach to the Iran nuclear deal, the Trump administration won’t be offering any economic concessions or sanctions relief to the North Korean regime until it follows through on the promises of denuclearization made at the Singapore summit. There won’t be a plane delivery of millions of dollar in cash, like the Mullahs in Tehran got from the Obama administration. With Trump in office, North Korea’s “rocket man” won’t be getting anything from Washington until he dismantles his prized collection of nuclear weapons.

This is good. Not good for N.K. to slide back because the urgency is gone. I feel bad for the people of N.K., but not bad enough to have our soldiers or our citizens die.

The deficit can be filled on a transactional basis for approved and audited (e.g. North Korean performance) supply of goods and services.

Of course, the LA Times still has a video tape of an Obama speech which according to legend would show him in an unflattering light…. just saying

That comment ended up in the wrong place…. I would delete it if it were doable!

Are you kidding? I appreciate you reminding me of it.