The attack did not kill anyone. 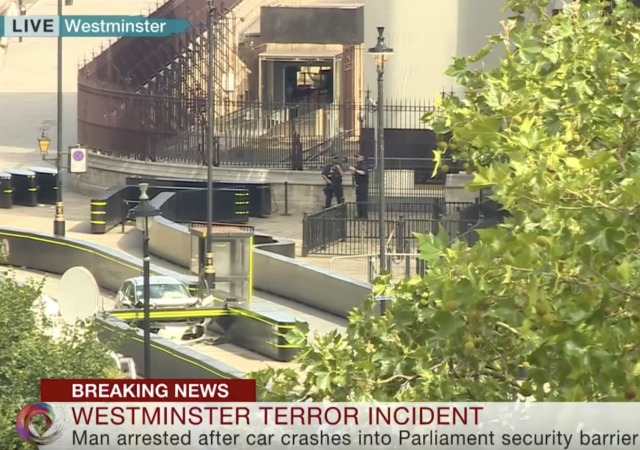 UK authorities have arrested a man on suspicion of terror offenses after a car drove into pedestrians outside of Parliament in Westminster on Tuesday morning. From The London Times:

The silver hatchback careered into a barrier just after 7.30am at what witnesses said looked to be about 40mph, hitting two people. Witnesses described flames and smoke coming from the car.

The driver was dragged out of the vehicle by armed police. A black man in jeans and a puffa jacket was seen being held by about a dozen officers as emergency services rushed to the scene and police put a “terrorism act cordon” in place around Parliament Square, extending down Whitehall.

Ewalina Ochab, who saw the crash, said that the driver appeared to mount the pavement and that the car had no front licence plate. “I think it looked intentional — the car drove at speed and towards the barriers,” she said. “I was walking on the other side [of the road]. I heard some noise and someone screamed. I turned around and I saw a silver car driving very fast close to the railings, maybe even on the pavement.” She added that “the person driving did not go out” of the vehicle.

The police have lifted the cordons along the Victoria Embankment and reopened Parliament Square along with the Westminster Tube station. The London Times continued:

Neil Basu, the national head of counterterrorism policing, said that the incident appeared to be a “deliberate act” and that the suspect was not co-operating with detectives. He said that the suspect had not been formally identified but was not thought to be known to MI5 or the counterterrorism policing network. Asked if the driver targeted police officers he said: “We can’t say that. It certainly appears to be a deliberate act but what the motivation is we can’t say. “

Mr Basu dismissed rumours that police vehicles were following the driver when he crashed into cyclists and pedestrians. “There wasn’t a police car in pursuit of the vehicle. I believe it was an ambulance in a completely unrelated call,” he said.

The BBC reported that sources told a correspondent that the man “is from Birmingham” and that he “was not known to MI5 or the counter terrorism network, but was known to police.”

It will be reported later that he just took the wrong Brexit on the way to work instead of it being an act of terrorism.

If it was a Muzzie, we may never know his motive.

The culprit is parallel parking, no doubt.