Still Out of Touch, Hollywood Set to Release 3 Anti-Trump Films This Fall

Still Out of Touch, Hollywood Set to Release 3 Anti-Trump Films This Fall 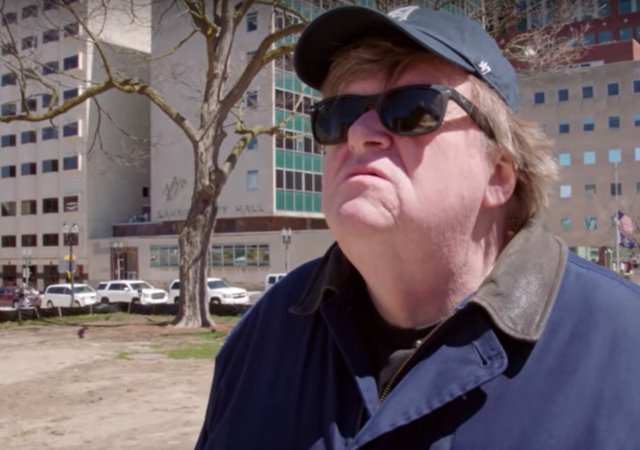 Critics made a fuss over the 2017 indie film “Beatriz at Dinner” for a simple reason.

The film didn’t make much of a splash, for starters. Its $7 million domestic haul is solid for an indie feature but hardly a cultural earthquake. The Trumpian flourishes were easy to spot in Lithgow’s character, but the story didn’t go overboard making him a doppelganger for the “Apprentice” alum.

That isn’t the case with three new films coming our way before the mid-term elections. Trump is the main attraction in each project, although they take wildly different approaches.

The first is the easiest to define, sight unseen. Michael Moore returns with “Fahrenheit 11/9” (Sept. 21), a clever spin on the title of his massively successful 2004 assault on then-President George W. Bush.

This time, President Trump is in the far-left director’s crosshairs. And, judging by the trailer, Moore’s shtick hasn’t aged a minute. We see selectively edited clips, peeks at Democratic “rock star” Alexandria Ocasio-Cortez and Moore pulling his usual pranks.

It all a bit pathetic. Ocasio-Cortez quickly emerged as a gaffe machine, a figure conservatives paint with the broadest, most unflattering, of brushes.

“…the C.D.C. recommends medical treatment only for blood lead levels at or above 45 micrograms per deciliter. Not a single child in Flint tested this high.”

And do progressives still need Moore’s shtick when they have late night comedians assaulting Trump five nights a week?

Besides, Moore’s persona took a sizable hit when we learned how many homes he had during his divorce proceedings. That, on top of the tales he’s spun in recent years about serial death threats, make him a less than credible figure for even true-blue progressives.

The match that lights the flame? The government institutes a loyalty oath for all citizens. It’s exactly the kind of fascism liberals think Trump will uncork next.

It begs the question: will Barinholtz embrace his personal politics and tilt the humor to the Left? Or will he craft a slapstick farce reminding us how much we have in common at the end of the day? Stay tuned.

The third film won’t get a fraction of the press the first features will enjoy. “American Chaos” (Sept. 14) finds self-described political junkie James Stern meeting the men and woman who made Donald Trump the most unlikely president in American history.

How did Stern misread the nation? Only what he finds disturbs him to the core. The trailer strongly hints at a not so happy resolution to Stern’s story.

Can any of the three impact the political landscape? Moore’s movie cred is strictly for true believers, and his pop culture cache has dimmed in recent years. Few will likely see “American Chaos” to even have an impact.

“The Oath,” however, offers the most potential for change. Humor breaks down our defenses when applied with a delicate, and fair, touch.

Either way, it’ll take more than the current scandals to dislodge President Trump from the Oval Office.

Christian Toto is the editor of the right-leaning entertainment site HollywoodInToto.com

Moore is so utterly odious, such a fatuous, self-aggrandizing, hypocritical and histrionic blowhard. But, he does represent the quintessence of the superficial, self-aggrandizing and self-congratulatory contemporary Leftist “celebrity.”

He boasts multiple residences, a coterie of private, armed security guards and a $10 million-plus net worth, but, since producing the clever propaganda piece “Roger & Me,” he has very cunningly milked his totally phony “working-class” persona (complete with the prop of a Detroit Tigers or New York Yankees baseball cap) to reap wealth and fame. Very similar to the rest of the utterly worthless, private sector-hating Dumb-o-crat standard-bearers, e.g, Bernard Sanders, Elizabeth Warren, et al.

I’m still shuddering at the nauseating image of a profusely-sweating Moore at the podium of a Green Party convention or conclave some years back, holding up a potted ficus plant and shrieking, “Ficus!!!”

Is Moore (the director, not Moore the celebrity chef, who we already know is diabetic) an undiagnosed diabetic? Profuse sweating with no obvious cause is a common symptom of unmanaged diabetes.

Well, I think his grotesque obesity is a cause.

Thyroid issues can cause you sweat a lot. The sweating isn’t something that bothers me, it is the twisted sick mind within the Jobba body that is the true monstrosity.

Let em keep rolling out the garbage. Cash burning by Proggies seems to be a favorite pastime.

Remember all the anti-Iraq war movies that were rolled out? Is there even a single one of them that anyone remembers? I remember Redford made a big flop that’s been totally forgotten.

The only good Iraq war themed movie that I recall was “The Hurt Locker”, and that was because it focused on men doing a dangerous job, not on politics.

Cash lost in campaign spending is gone for good; cash lost in financing movies not so much. You can tax shelter your loss and distribute it onto the working stiffs or rather national debt.

I am opposed to the capital gain / loss tax rules but, if I could only get rid of one of them, I would discontinue the rule of government allowing favorable tax treatment on bad investments. People would be less likely to make these propaganda movies if they were on the hook for the entire loss.

Was that an intended pun?

Campaign contributions to the democrats.

No, to the Republicans.

It will open in ten thousand theaters. It will make, in the US, on the first weekend $128.99 and no doubt more in China. It will be produced by a crowd of investors who think I only think what Donald Trump tells me to think.

You want more Trump, this is how you get more Trump. And I was never a fan.

3 films that will lose biggly

Moore/Weinstein. Don’t forget that. Moore was accused by his wife of rape. Or perhaps she just said it was like being raped.

I’m glad I’m not in a crowd that has even heard of Beatriz at Dinner, let alone discuss how critics raved over it.

I refuse to see any modern movies any more. Why am I going to give my money to people who hate my guts to tell me on a 50-foot wide screen how much they hate my guts?

“That isn’t the case with three new films coming our way before the mid-term elections.”
.
The Democrap machine believes in nothing more than they believe in their polls. After polling for months, the Democrap Party decided their best chance in the midterms is “Don’t Mention Trump.” That’s their new theme, announced last week. No more talking about Trump.
.
It’s been a couple of days now (almost two) since the new DNC slogan was announced. “Don’t mention Trump.” And in response, Hollyweird liberals are going all out anti-Trump for their movie releases. Three in the pipeline so far. And all they will do is talk abut Trump. Even though the Democrap polls say “Don’t Mention Trump.”
.
Thanks Hollyweird! I couldn’t be happier. ROFLMAO!

Somebody wants to lose a bunch of money.

Everybody wants you to lose money.

These kinds of hit pieces, coordinated with the DNC and timed for maximum impact to the election, really need to be called in the law what they are, undeclared and therefore illegal contributions to the Democrat party. They probably fun afoul of contribution size limits too.

“Out of touch” my ass. They’re propagandists. They have no idea why, but they are what they are.

What I find so amusing, or perhaps pathetic is a more precise word, is how utterly clueless and insufferable these are. One example, not too long ago a Hollywood production crew intended to film in Paris. They stayed in the George V hotel (now the Four Seasons George V Paris). The crew was so alarmed, without any substantiation, that the water was not potable. So the crew’s management ordered in an untold number of bottles of Evian water for not only drinking, but bathing. Needless to say the French were deeply offended.

Upon reading Christian’s article above I muttered to myself “I won’t be watching any of that sewage … I know! I’ll watch a Dinesh D’Souza’s movie on Amazon Prime* instead”.

So I look up Dinesh and there’s “Hillary’s America” and “2016: Obama’s America” on Prime* and save both of them to my Watch List. But wait! I think I smell a rat!

So how is it the left is free to flush the market with their propagandist sewage in the fall, while movies from the right are pulled from the market? Is this another big-tech censorship just in time for the election?

Thanks for the head’s up.

I just went to Amazon and bought both DVDs. Home screening parties sound like an idea. Whadayathink?

And they would make great gifts too.

And on that note although I read things from the left so that I can know the “enemy” I am not about to enrich them by buying a movie ticket. Especially from the Michael Moore thing.

I suspect that these films will only make a majority of Americans loathe Hollywood more than they do now.