Once again, the reality of the Tamimis is not as portrayed by western activists and sympathetic media 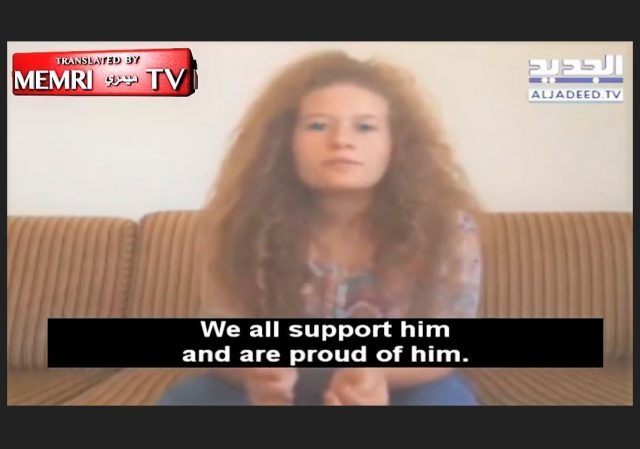 We have written many times about how the Tamimi Clan from Nabi Saleh presents a false image to willing western leftist dupes.

The image the Tamimis present, which is lapped up by visiting activists, is of a peaceful, non-violent family struggling against the evil Israelis. The reality is quite different.

Here are a small sample of our posts exposing the true nature of the Tamimis:

Ahed Tamimi, with her flowing blond hair, has been the media star of the Tamimi media operation since early childhood.

We also exposed how Ahed herself expressed support for terror:

Ahed was recently released after 8 months in prison, to additional media hoopla.

As if there were any doubt of Ahed’s true sentiments (and those of her family), Ahed just appeared on Lebanese TV to salute and pledge support for Hezbollah chief Hassan Nasrallah.

Elder of Ziyon had the story first, including the full video:

Al Jadeed TV broadcast a fawning video, complete with romantic footage of Tamimi’s shouting at amused soldiers when she was younger.

The Times of Israel has more, including a captioned and translated clip via MEMRI:

Palestinian teenager Ahed Tamimi thanked the head of Lebanon’s Hezbollah terror group for praising her “brave and courageous” striking of an Israeli soldier….

In a clip broadcast on Lebanese television Tuesday, Tamimi thanked Hassan Nassrallah for his support, which she said “makes us grow stronger.”

“[Nasrallah’s] words boosted our morale – not just my morale, but the morale of many people, because I represent the people. I’m not just representing myself, but the people and the cause,” Tamimi said, according to a translation from MEMRI, the Middle East Media Research Institute.

“This was in support of the entire Palestinian people, not just me,” she

“We all support him and are proud,” she said of Nasrallah, whose Iran-backed group has been responsible for killing hundreds of people in terror attacks, among them many Israelis and Jews, and is committed to Israel’s destruction.

“I’d like to salute him, to thank him for his support, and to tell him that he always makes us grow stronger,” she said. 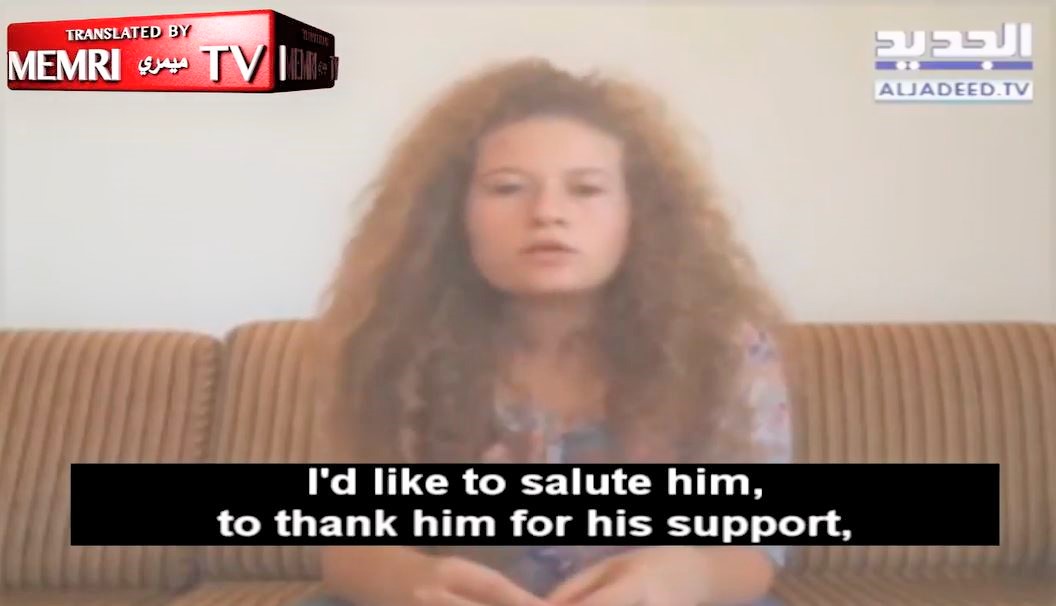 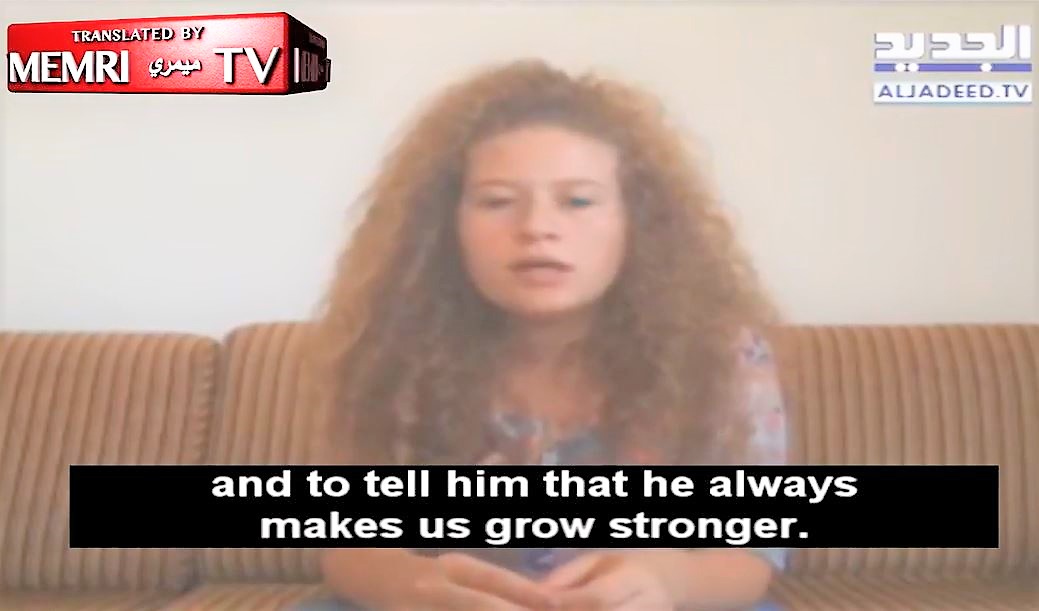 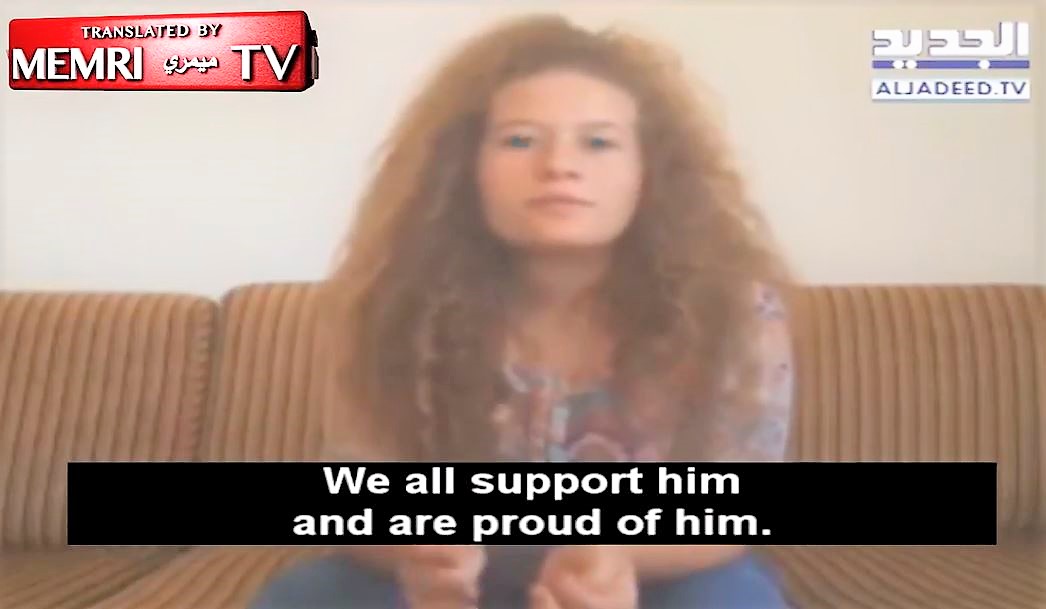 What man gave her permission to speak?

Exile her to Gaza – she’s sure to be in one of the Hamas buildings, the next time Israel has to go in and clean things up.

I just finished and internet shouting match with someone who “used to be” a friend.

The moment someone brings “The Protocols Of The Elders Of Zion” into the debate, they have proven themselves to be RABID ANTI-SEMITES can count themselves lucky they aren’t in the same room as me at the time.

Strange the rest of his friends, that also happen to be Jewish, actually put up with this bullshit from him.

You’re kidding, somebody actually brought THAT up? As in they actually believed it? Seriously, that is holocaust denial level stuff, if he’s in for one, he’s in for the other.

I am always amazed that there are some sheep who so desperate to be “liked” that they’ll try oh so hard to be friends with the wolves.

That pre-dates the holocaust by decades – yet was still used as part of the basis of Hitlers jew-scape-goatery.

Doesn’t believe it – SWEARS BY IT. Everything is “Zionists this – Zionists that”.

The ignorance DRIVES ME BATSHIT. When someone is so invested in it, there’s no logic, or talking to them.

The Tamimi clan needs to start running into lots of adversity, lethal or life altering adversity. One by one, and while that is happening, everyone should be reminding them that their fate must be Allah’s will.

Yawn… You are feeding this to willing western rightist dupes. What is the purpose? Does it change any minds?

The truth is that there are plenty of reasonable people, Jews and sympathizers, who question the wisdom of current Israeli policy and of Trump’s one-sided cheer-leading.

When you end moderation, what you get is willing dupes of all persuasions. Professor, I am sure I don’t need to remind you that Hezbollah and eventually Hassan Nasrallah became a power in Lebanon as a direct result of the Israeli invasion. Yes, the invasion was the result of the regular incursions and shelling of Northern Israel which was the result of ………….. Need I go on?

No, we don’t need you to go on shoveling palestinian propaganda. There is a long history of palestinians asking for an attitude adjustment. Thye continue to commit acts of war. Tit for tat responses are inadequate to deter them, therefore they need to see much more vigorous responses,ten, a hundred….a million fold, until they truly want peace.
besides, palestinians have dug themselves a hole with their reproduction as a weapon policy, greatly lowering their population would give them a chance to try a more productive path.

You are feeding this to willing western rightist dupes.

Bull. This is the precise truth, and those who are willing to hear it are not dupes.

What is the purpose? Does it change any minds?

The truth is its own purpose. Whether it changes any minds is irrelevant.

The truth is that there are plenty of reasonable people, Jews and sympathizers, who question the wisdom of current Israeli policy and of Trump’s one-sided cheer-leading.

That depends which policy you mean. The current Israeli government, like all its predecessors since 1948, has many wrong-headed policies, as well as some correct ones that reasonable people may nevertheless question.

But the policy of continuing to exist and refusing to surrender or to commit suicide, which is the only Israeli policy to which Tamimi objects? No reasonable person, Jew or sympathizer, can disagree with that.

Nor can reasonable people disagree with the policy (to whatever small extent the current government actually has it) of insisting that Israel’s existence is legitimate, and does not depend on the Arabs, the EU, or the UN. On the contrary, the post-zionist opposition’s insecurity, its delusion that the Arabs’ cause is legitimate and that Israel can only get legitimacy from Arab recognition, is clinically insane.

I’m sure there’s a suicide belt out there with her name on it.