Not out of love: Joins Broadway stars in songs from “Les Miserables” and other musicals to taunt Trump 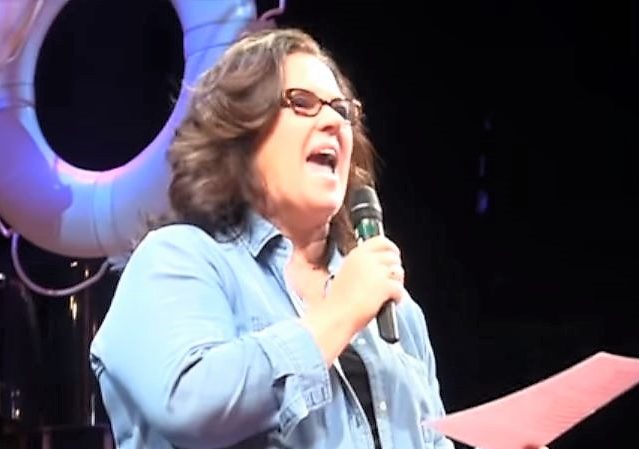 Reports are circulating that O’Donnell, whose only claims to fame in recent years are allegations of illegal campaign donations and divorcing her wife, will be joining some protest at which gaggles of #Resistance protesters will sing Broadway tunes in the general direction of the White House.

Considering that O’Donnell was engaged in a high-profile “feud” with Trump years prior to his ascending to the presidency of these United States, this seems a clear attempt to troll the president into resurrecting that childish feud.

Rosie O'Donnell and cast members from some of Broadway's biggest musicals plan to serenade Pres. Trump on Monday—but from outside the White House in protest. https://t.co/TuZqtnJLKj pic.twitter.com/QpPjqUESzC

Rosie O’Donnell is leading Broadway stars for a protest outside the White House that will have them belting out songs from “Les Miserables” and other musicals.

The group will perform songs such as “A Brand New Day” from “The Wiz” and “The Sound of Music” tune “Climb Ev’ry Mountain,” according to The Associated Press.

The protest is reportedly being organized by Broadway veteran and SiriusXM host Seth Rudetsky and husband James Wesley.

Since few outside of NYC or Hollywood have ever heard of Rudetsky or Wesley, they are clearly hitching their star to former star O’Donnell.  The move is cynical, though.  O’Donnell, as her talk show career was flagging, engaged in a public feud with Trump, so this stunt seems to be an attempt to troll the president and prompt him to respond to O’Donnell.

Then-candidate Trump even joked about the O’Donnell “feud” during the GOP primary debates.

Here’s the thing:  no one cares.  We all knew about the Trump-O’Donnell feud in 2016, and he won anyway.  I wasn’t a fan of that exchange, but I still voted for Trump over the only available alternative.  Today, I would enthusiastically cast my vote for President Trump, so this trolling stunt, even if it achieved its goal of goading the president into making unsavory comments, is a waste of time.  He’s coarse, we know that.  And we elected him anyway.

The president should enjoy the free concert and ponder how far he’s come since that pointless feud.

The “Fat Lady Sings” jokes damn near write themselves.

There was a clip of her singing on Fox today – it made my ears bleed.

Be ready with a truck load of amplifiers aimed at the smelly progressives belting out songs that will make their hair catch on fire. ‘America the Beautiful’ and the National Anthem should do the trick. Save ‘The Bitch is Back’ until Fats O’Donnell takes the stage.

Rosie ain’t. Rosy, that is.

How true. Please, no more follow ups on Rosie O’ trying to make herself relevant.

I dislike Rosie O’Donnell so badly that I refuse to watch her on TV. And I dislike “our pussy-grabbing; porn-star-banging; supplier-stiffing; majority-vote-losing; Mexican-Muslim-hating; Charlottesville-excusing; family-separating; racist; Liar-in-Chief” even more – to the point that I cannot stomach Fox News’ constant coverage bias anymore.

But apparently you can stomach other sources’ constant coverage bias – because you agree with them?

The link was to a “Russia controls Trump” screed.

The same trump that Facebook just this week found to be the target of numerous, supposedly Rusiisn, InfoBots trying to spread anti trump propaganda.
The same trump that, besides Hillary, was the also target of FakeNews paid political accounts during the last campaign.

Face it, the only presidential campaign that unlawfully paid to purchase and spread FakeNews disinformation wasn’t the trump one.

The Russian intent currently would appear to be to support a Dem takeover in congress to split the government and render trump less powerful. Since from the link you willingly spread that would appear to be your intent as well. Does that make you “owned by the Russians”?

Is there room for more songs in the program? I’m thinking one from 1776.

Now I don’t care that she lost her show, that I wasn’t watching anyway because I only watch certain things like the Tour de France, the World Cup and the Olympics.