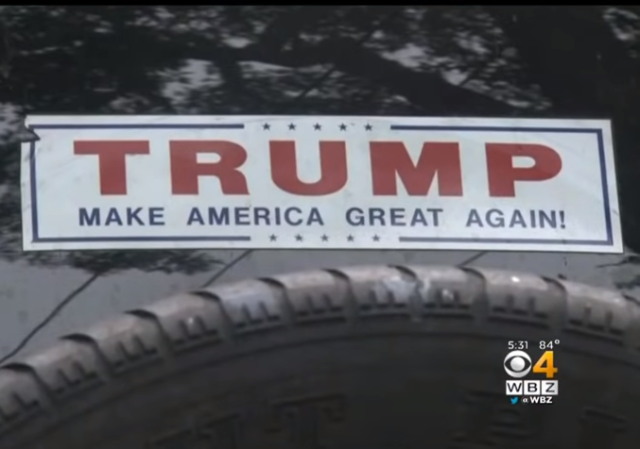 Trump Derangement Syndrome strikes again. A Massachusetts woman has been arrested for allegedly using her car to ram another driver’s vehicle because it has a Trump bumper sticker on the back of it. The victim wisely took video of the incident.

A Taunton woman accused of intentionally driving into a man’s car a month ago after becoming enraged by a Trump bumper sticker pleaded not guilty Monday in Barnstable District Court to a charge of assault with a dangerous weapon.

Chloe Wright, 25, also faces charges of vandalizing property and leaving the scene of property damage. She was released on $1,250 bail and was ordered to stay away from the victim.

On June 30, a man called Barnstable police to report a hit-and-run crash. He told responding officers he had been driving south on Bearses Way in Hyannis, and was stopped for a red light at the intersection of Route 28 when the driver of the car behind him began honking the horn, according to a police report.

She honked and yelled so much that the man stopped his car, thinking that she was trying to tell him something was wrong with it. Then this happened:

“She said, ‘You voted for Trump?’” the man wrote in a statement. “I said yes. She called me a racist and several other names.”

“She bent my door and I had to lean back to avoid getting hit,” the man wrote. “She also hit the side of my car.”

Here’s a video report from CBS News in Boston:

Wright gave police an address to a home in a trailer park, but residents say an elderly woman lives at the address and they’d never heard of the suspect. She’s been charged with Assault and Battery with a Dangerous Weapon.

As for the victim, he’s only left wondering one thing: “Was it really worth it for her?”

Here’s a photo of the suspect:

Chloe Wright of Taunton, Massachusetts … the face of #TDS pic.twitter.com/1nU5NtHd2X

Those Trump supporters sure are dangerous, aren’t they media?

In this particular instance, Under the MA criminal code, assault with a dangerous weapon is a felony punishable by up to five years in the can along with a $1,000 fine. I doubt Chloe Wright will receive the max punishment, but odds are good she’ll do some jail time, have to pay restitution, and will be on the books as a convicted felon for the rest of her life thanks to her little display of TDS.

I agree, but only because she apparently gave law enforcement a false address. Had she been straight with the PD, she probably would have been (and may still be) given a plea deal for a misdemeanor with community service and restitution to the victim. It is MA, after all.

People who live all year on the Cape are not the same as people who simply enjoy their second, third, or whatever home. The challenge for many who are not as far left as most of the states local and federal elected officials is that their district includes some of the wealthiest Dems in the NE with homes on the islands (Vineyard and Nantucket). Local DA might be less sympathetic than most in the state to her “triggered” actions.

MarkJ: True that, my friend. But look at this way: Old Chloe’s life as a socialist candidate for higher office is just beginning.

“Trump Anxiety Disorder”? They’re so infantile that we medicalize their wish that Trump weren’t president?

Rather than showing the tralier park address of an old woman who had nothing to do with it, why not show Chloe Wright’s actual address?

It might help if the MSM would report these stories so they can help tamp down the rhetoric and stop the assualts they are promoting. But noooo…

This is going to end badly for someone!

The story was up on Boston.com (the free site owned by the Boston Globe) for a few hours yesterday but it doesn’t appear to have been posted to Boston.com’s FB page which is where comments are posted. Surprisingly it seems to have garnered little attention at the more rightward leaning Boston Herald.

I was happily surprised that she was actually arrested in a state like Massachusetts.

But then I saw she was white and claimed to live in a trailer park, so she did not qualify for a free pass – so far.

She should be placed in solitary with a repeating message of Trump is great, Vote Trump 2020 for the duration. That might cure her TDS.

Umm, why did the reporter say “he BELIEVES” she attacked him because of voting for Trump? She asked him if he voted for Trump then proceeded to hit his car, and nearly him. The media continues it push to sway things, even in inserting the believes word in a manner which sounds a bit like he is the insane one who would dare to think this snowflake did this.

She seems like a real catch… I wonder what else triggers this woman.

Again, leftists always, eventually, resort to violence, threats of violence, or glorification of violence to advance their wicked agenda. Always.

Oh well, Taunton … what can you expect. The best thing to do about Taunton is drive around it.

The court in Barnstable is nothing like the court in, say, La-La Land Cambridge. She might actually be in trouble. Maybe.

But it’s odd; conventional TDS alone wouldn’t seem to explain it. Bearses Way and Rt 28 is a very busy intersection. Southbound side of Bearses is three lanes (left turn, right turn, straight) and as packed as a parking lot all summer. And Taunton is fifty miles from there. There’s no way this was the first Trump sticker this fruitcake has seen. Why the excitement this time?

He has it mounted above the spare on his Jeep Liberty (?), so it was in her face when she stopped behind him. The bumper sticker must have went animatronic – in her head at least.

It’s Massachusetts, Jake. Forget about it.

She will get a free pass from the court.

She will be hired by The New York Times.

All you commenters saying she will get no real consequences are right. The institutional left and the violent left are one in the same.

Bill Ayers gets invited weekly to the white house under Obama, murderous radicals get pardoned, jobs with charities, NGOs or government positions. Churches’ charities even fund radical bomb throwers. All because this is a hot war we don’t even recognize.

We never dig in to see what is really happening. Our bi-factional ruling party supported the bomb throwers and murderers because they were in on it. They knew the Overton window was moving their way.

No, quit looking. No incitement here or anywhere else because the left has absolute free speech. Or maybe we could go back to what the First Amendment really meant so we can end this calliope whirling until it crashes.

Like I responded above, it’s possible the Barnestable DA will be the least favorable to her than any other in MA. The Cape is different and has a 2 class system. Many who live there and work year round are very different from the seasonal home owners. I wouldn’t immediately assume she gets the same leniency she might just 50 miles north toward Boston.

It’s Trump Derangement Syndrome (TDS), not the one the reporter stated.

Anyway, that’s one reason I won’t put a Trump sticker on my truck. If someone did that to me, there would be consequences bigger than they could handle. I do this for their protection.