One of the many reasons why the Congressional Approval Rating is 17%. 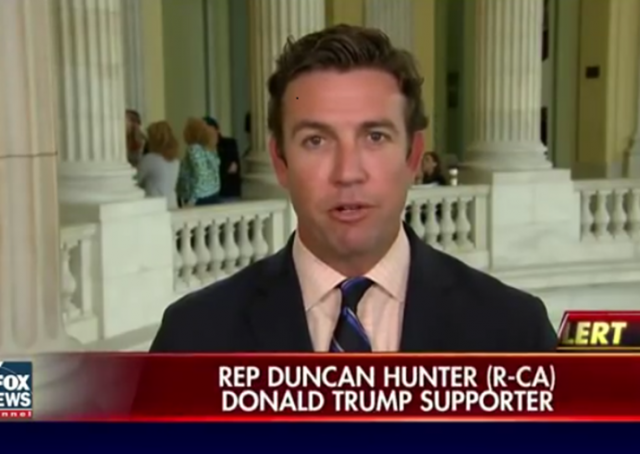 Tuesday was a big day for the American court system, as the Paul Manafort trial concluded with verdicts and Trump’s personal attorney plead guilty to an assortment of charges that are still being analyzed.

While the media focused on the legal drama on the East Coast, a Congressman from the Southern California area and his wife were indicted on campaign finance charges and fraud.

Rep. Duncan Hunter, R-Alpine, and his wife, Margaret, were indicted Tuesday on charges including wire fraud and campaign finance crimes, according to a federal indictment.

The document, filed Tuesday in federal court, accuses the couple of converting more than $250,000 in campaign funds to pay for personal expenses and filing false campaign finance records with the Federal Election Commission. The indictment accuses the couple of crimes including conspiracy to commit wire fraud, falsification of records and aiding and abetting prohibited use of campaign contributions.

The crimes date back to 2009, according to the indictment.

The nearly 50-page indictment describes how seemingly personal spending from the period between 2009 to 2016 may have been repackaged as work or campaign-related events.

To conceal the personal expenditures, family dental bills were listed as a charitable contribution to “Smiles for Life,” the government alleges. Tickets for the family to see Riverdance at the San Diego Civic Theatre became “San Diego Civic Center for Republican Women Federated/Fundraising,” according to the indictment. Clothing purchases at a golf course were falsely reported as golf “balls for the wounded warriors.” SeaWorld tickets worth more $250 were called an “educational tour.”

“The indictment alleges that Congressman Hunter and his wife repeatedly dipped into campaign coffers as if they were personal bank accounts, and falsified FEC campaign finance reports to cover their tracks,” said U.S. Atty. Adam Braverman. “Elected representatives should jealously guard the public’s trust, not abuse their positions for personal gain. Today’s indictment is a reminder that no one is above the law.”

The response from the Hunter office is that the indictment was expedited to impact the November election.

Asked for comment about the indictment, a representative for Hunter sent an Aug. 6 letter from Hunter’s attorney, Gregory A. Vega, to U.S. Deputy Attorney General Rod J. Rosenstein asking him to postpone the indictment.

Vega contended that there was a ‘rush to indict’ after a two-year grand jury investigation.

There was ‘politically motivated’ pressure to wrap up the investigation in order to tarnish Hunter before the general election after he handily won a June primary, Vega said.

And this is where Mueller’s corruption, FBI corruption, Deep State corruption, etc begin to harm the nation: I look at this headline and now assume “just another political prosecution, if they were Clinton cronys they’d have blanket immunity”

How true is that? Do we really think the majority of Americans will delve into the particulars of the case? Or will they simply roll their eyes at it as I have done?

Faith has been lost. No one trusts the judicial system. Maybe they never should have. Maybe it was always this political and this corrupt. Maybe we were fools to play by the rules.

Warning. If you support Trump Sessions will get you.

Which Comey buddy cooked this investigation? I’m sure it is a political hit job like everything the FBI does. They have become the most corrupt agency in the Gov’t. Until they prosecute the illegality in the last election both that of Clinton and that of framing Trump and his family, everything they do will be political and suspect.

“Maybe it was always this political and this corrupt.”

At least as long as there has been an FBI.

Governments are always corrupt. And the more hands that are out, the more corrupt it becomes.

Weird that FOX has “Donald Trump supporters” under Hunter’s Patty affiliation. Has anyone ever seen that done before?

That means we should look forward to them putting “Friend of Farrakhan” under Maxine Waters or “MS-13 Supporter” for Nancy Pelosi’s picture, right?

So, we got that going for us……

Yes, but why do that far? Clinton should have had “friend of Al Sharpton” under her picture, as she and Sanders sought his support.

I wish we could edit these things.

This is happening on both sides of the aisle. It needs to be prosecuted.

Looked through the story a bit – I could never understand how people who had decent income could be such ridiculous spendthrifts, and be so absolutely stupid about money. Looks like the Hunters overdrew their checking account every month, and that is an astoundingly stupid way to live a life. And even though that isn’t illegal, someone in a position of trust who lives like that is always going to be open to corruption schemes and financial pressures from every direction.

Duncan Hunter said good things, had decent political instincts – but the way he and his wife have handled their personal lives make him completely unqualified to hold any office at all.

Said it before, I’ll say it again.

Why did God make snakes before he made Congress critters? He needed the practice. ????

“Elected representatives should jealously guard the public’s trust, not abuse their positions for personal gain. Today’s indictment is a reminder that no one is above the law.”
—
LOLOLOLOLOLOLOLOLOLOLOL…

and i’m sure that lying, politically motivated scumbag said that with a straight face.

pull the other one: it’s got bells on it.

So when do you suppose Maxine Waters will be indicted for funneling campaign money to her daughter?

She has a (D) after her name, so that would be never.

Now, can we please investigate the finances of Eric Swalwell? His job and his wife’s job at the hotel in Half Moon Bay cannot possibly adequately finance his suits, his constant haircuts, and their childcare.

I live in Hunter’s district. This is so disappointing. He and his wife had to sell their home to repay and are living at his Father’s home

He’s also still better on policies than the Dem. Don’t be surprised if he’s re-elected

Definitely open season on Republicans in the caverns of the deep state. I am not familiar with Hunter’s case, but would be nice to have some bi-partisan justice and see a few shady Dems indicted.

Today’s indictment is a reminder that no one is above the law.

As long as Hillary and friends are visible above the horizon, the best we can honestly say is today’s indictment is a reminder that not everyone is above the law.

If they had just had the good sense to funnel the money into a “charity” and then use that to pay for expenses, they’d be fine now.

That is sad but true.

How dare you attack the Trump Foundation!

I was stunned when I read this only to find out it is the son with the same name. Good riddance. My sympathies for his father having his name sullied by an idiot son.

I expect around 200 more indictments of Congressional Republicans before November. By any means necessary.

By any means necessary worked for republicans.

I am not surprised that there are 200 more corrupt republicans. Care to provide the list?