“lost his bid for the Democrat nomination for governor to 50.1 percent to 34.6 percent” 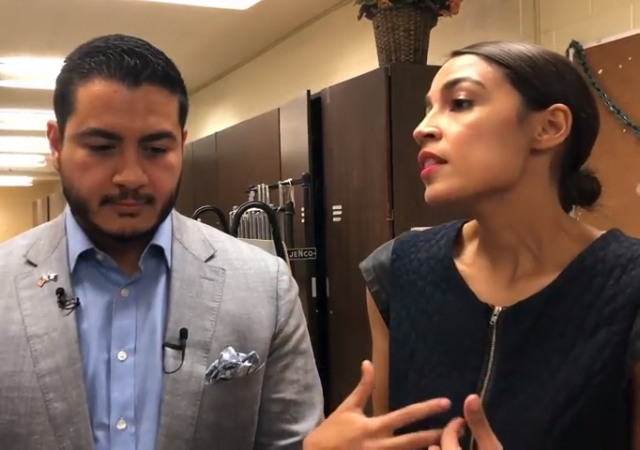 Abdul El-Sayed was the candidate and they thought he could prove that Democratic Socialism would play in the midwest. Just take a look at this Think Progress report by Addy Baird:

El-Sayed’s platform mirrors Sanders’ and Ocasio-Cortez’s. He supports raising the minimum wage to $15/hour, implementing single-payer health care in the state, free college for families earning less than $150,000 a year, universal pre-K, legalizing marijuana, and ending Right to Work. He has vowed never to accept corporate money and to “get the money out of politics.”

El-Sayed also believes he can bring a fresh perspective to the governor’s mansion. At a recent rally in Ypsilanti, he opened by asking the crowd, “Who here believes in democracy over corporate domination? Who thinks that we need new blood in places like Lansing and D.C.? And who believes that when we stand together, when we lift our voices, we will get that done?”

According to the Daily Intelligencer, the tightly-packed crowd responded with cheers and resounding applause.

Bernie Sanders and Ocasio-Cortez, both traveled to Michigan to support him. Ella Nilsen reported at VOX:

In a swing state that dealt a fatal blow to Democrats in 2016, two rising progressive stars thrilled a crowd of 1,200 by aiming their harshest words not at Donald Trump but at the Democratic Party, which they declared too beholden to corporations and lacking solutions for working people.

The crowd, packed tightly into seats at a local high school, chanted, “I believe that we will win!” One woman waved a sign proclaiming, “I’m feeling the Bern.”

They weren’t there to see Bernie Sanders but two of his young disciples: Alexandria Ocasio-Cortez, the 28-year-old Democratic Socialist who took down House Democratic Caucus Chair Joe Crowley in his home district in the Bronx; and Abdul El-Sayed, 33, a progressive Democrat running for Michigan governor who wants to bring Medicare-for-all to the state (Sanders did end up campaigning with El-Sayed the following weekend).

Cortez and El-Sayed also made a joint appearance with Linda Sarsour at the Annual Universal Muslim Association of America (UMAA) conference in July.

The race is now over and El-Sayed came up short:

The Associated Press called the race for Whitmer at 9:55 p.m.

Whitmer, known as a liberal lawmaker during her time in the legislature, faced attacks from the left from El-Sayed and Thanedar.

El-Sayed in particular had gotten the endorsement of Bernie Sanders, who won over Hillary Clinton in Michigan’s 2016 presidential primary and drew comparisons between his candidacy and El-Sayed’s in a speech last weekend.

They will try to spin this as a win but that’s not what it is, he lost. Even Cortez and Bernie couldn’t drag him over the finish line.

The biggest loser is Alexandria Ocasio-Cortez. Every candidate she endorsed for Tuesday’s elections lost. Kyle Olson reports at the American Mirror:

El-Sayed lost his bid for the Democrat nomination for governor to 50.1 percent to 34.6 percent, according to numbers published by the New York Times.

Saad came in fourth in the five-way race, capturing only 20.1 percent of the vote.

people are seeing her for what she really is. not good for the democratic party

An airhead who happens to be pretty, temporally.

She is obama, without the freshness of the scam. And without a beast of a fake wife by her side.

Who cares. The woman that won the Dem nomination is just as progressive as the two men that lost. All three ran on anti-Trump, pro-Obama-care, anti-capitalist, I’ll-give-you-stuff rhetoric. And the Repubs nominated a big government insider.

It’s scary that El-sayed got even that much of the vote!
He’s a muslim brotherhood supporter (from what I’ve read, supported mb in Egypt)!

It is common for members of all political persuasions to be unaware when party philosophy shifts, and to continue to vote for their party, even when doing so is not in their best interests. The same is true of religion. All bureaucracies come to represent themselves over the interests of those they are supposed to represent, even churches.
It is the herd mentality.

El-sayed once and I’ll el-sayed again: America will split into pieces. I just worry for Isreal and Taiwan: will enough of america exist to protect them.

Can anybody figure the new geography?

A lot of people just walk into the voting booth and pull the handle for a straight ticket without any thought of who they are voting for. They’re just voting against.

I’m looking at Cortez and my watch and I see about 14 minutes and 50 seconds of her fame have elapsed.

That was a play for the Dearborn vote.

“Massive Sinkhole in Fraser, Michigan, Prompts Evacuations” should have been relocated to Dearborn.

Shows you how limited they are in their thinking.

Send her back to the minor leagues.

This woman was made for Dennis Miller.

The Bernie move could have worked since Clinton lost Michigan to him in the 2016 primaries. Sayed and the other Dem, Shri Thanedar, were not just running to the far left, they ran campaigns based on Trump hatred. Whitmer stayed in the middle talking about roads and health care (which has been doing pretty well under Republican Gov Snyder). The Congressional primary candidates that relied on Trump bashing all lost too. I wonder if anybody will cover that?

she is welcome to come to my district too

– all the more attention to her ideas

Still amazed how a nobody, who happened to unseat an old white boy in a mostly non-white district by promising free shit, suddenly becomes relevant on a national scale.

As if the hot latina bartender, is now somehow a shot-caller in Dem national politics.

Frighteningly enough – we have not heard the last of her. Pappas will NEVER WIN in that district, so now we’re stuck with her being pushed in front of cameras in D.C. for the foreseeable future. The only hope, is that Crowley will run as an independent (with zero help from Perez/DNC, who are in love with her), and pull enough votes away from her, to give Pappas a chance.

She’s a vapid puppet, and unless they can get her to stick to flashcards and teleprompters – she will be shown for the empty-headed idealist college -educated-(indoctrinated)-moron she is.

NY, like Cali, is LOST. I’m ashamed to tell people I was born there.

AOC is the insane wing of the Democratic Party’s attempt to dislodge the corrupt wing (represented by Hillary, whom they rightly blame for losing the election).

The corrupt wing is boring, quiet, and methodical. And they have a death grip on the party through their access to money. This is why Nancy Pelosi still has a job after serial losses to Republicans: she’s a good fundraiser.

The insane socialist wing has had enough. They are fighting back the only way they can, by manufacturing buzz around a standard-bearer who represents the young and idealistic (read: stupid).

The media built her up to be some mega deal. Despite her education, her interviews show that she is basically clueless about reality.

I read that she had been fairly conservative, which isn’t surprising coming from a well off family, and then she went to college and the indoctrination center that those institutions usually are, she bought the party line without really knowing much about it. She is shallow, and moved far left in a misguided protest type move against her privileged upbringing.

I get it that it was a shock that the Dims number 4 (how the heck do they rate these people, aren’t they all about class war fare?) lost, even though he didn’t campaign against a light weight, know nothing, extreme leftist vacuous brained twerp who used looks and youth and ethnicity to win a primary which doesn’t really reflect massive support.

She comes off as a moron when asked any questions of substance, which, to me, shows she talks the talk without having a solid foundation of how reality kicks her ideas in the teeth.

Unfortunately, we in Michigan are doomed if Whitmer wins. She’s further left than our Previous Socialist Granholm and would take us back 8 years to destruction.

Shame. The Dems can now move a bit to the center for the gbeneral election.

Who knew that Russian infiltration was so widespread?

The hot blondes are welcome to infiltrate any time.

Abdul El-Sayed. Sounds Mormon. No? OK, maybe he’d do better with the Samali take over in Minnesota. But it doesn’t sound like Abdul had a chance even with Occasional-Cortex’s blessings. What a shock.

But it was a moral victory!!