Media beclowns itself pouncing on ICE arrest with emotion, not facts

Media beclowns itself pouncing on ICE arrest with emotion, not facts 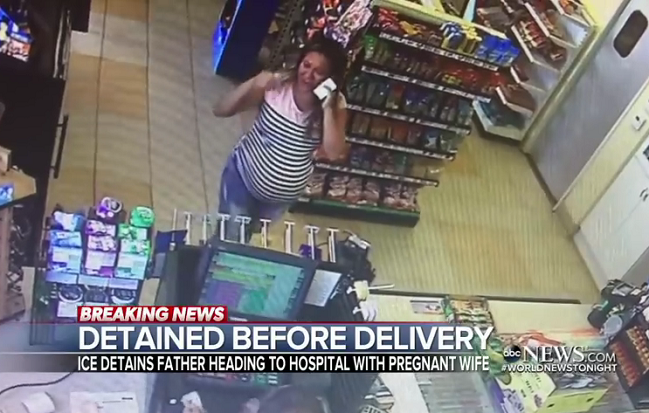 Yesterday, ICE arrested an illegal alien who was in the process of driving his pregnant wife to the hospital; ICE later stated that the man was picked up on an outstanding warrant for murder in his native Mexico.

The media ran with the story, focusing on the “outrage” of arresting him while his wife was left to drive herself to the hospital.

Daniel Dale, an intrepid journalist for the Toronto Star, appears to have broken the story of the reason behind the arrest and is facing pushback for his efforts to tell the whole story.

Important update: ICE said today that this man was arrested because of a homicide warrant for him in Mexico. ICE didn’t mention this in its comments to media yesterday. His lawyer says he denies that there are such Mexico charges; no details from ICE yet. https://t.co/AnIfv8DapM

And boy did they run with it. 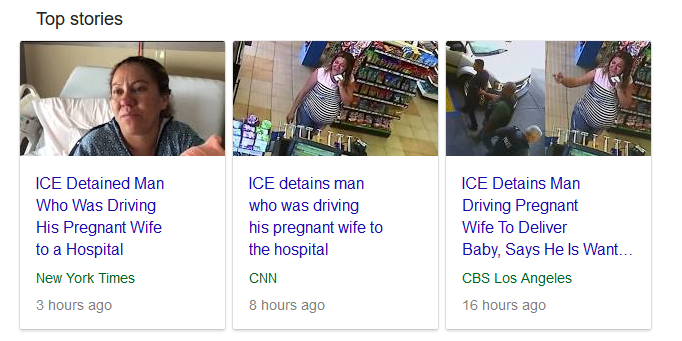 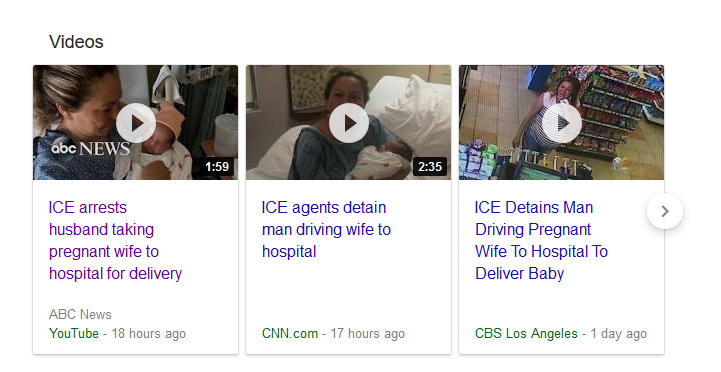 Oh, and she wasn’t in labor, though you might think so from these headlines; they were driving to hospital for a planned C-section.

This is a great example of why the media has lost credibility. What possible justification can there be for multiple news organization omitting that the person ICE arrested was wanted for murder? pic.twitter.com/dtg2Jo2JsR

Surveillance footage shows ICE agents detaining a man in California stopped at a gas station who was bringing his pregnant wife to the hospital for the delivery of their baby. https://t.co/NrzXyHktdH pic.twitter.com/kesN7U37aW

And of course the flurry of headlines and news reports focused on only one aspect, the one that makes ICE look bad to those unwilling to wait for details, prompted the left to meltdown across social media.

There’s heartless and then there’s whatever the hell this is. https://t.co/qWgPoJ2ABe

ICE detained Joel while he drove his wife to the hospital to deliver their baby.

How is government serving its purpose here? How does this better society?

This leaves a mom without a partner, a baby without a father, and us without a soul.#AbolishICEhttps://t.co/XEy7609HXz

As the full picture began to emerge, it is the media who looks ridiculous, not ICE, who as it turns out were doing their job and getting a man wanted for murder, here illegally, off our streets.

Did you read the article, or just the headline? The piece says:

1. ICE claims he was "wanted by law enforcement authorities in Mexico on an outstanding homicide warrant."

2. She was not in labor – she was going in for a scheduled c-section.

What would you have done?

Dear screaming #democrats. A) She wasn't in labor…..If she was ICE would've gotten her an ambulance. B) He is wanted for MURDER! https://t.co/E37qd7VxdO

ICE says it detained a man who was taking his wife to a hospital for a C-section in California because of homicide charges against him in Mexico. His lawyer says the Mexican consulate was not able to confirm the charges. https://t.co/WqgUgZYHv4

This is how the MSM create Fake News. By not telling the whole truth…..
(Media Leaves Out Key Fact In ICE Arrest of Man Driving Pregnant Wife To Hospital)https://t.co/3Xtb00PiSK

Anyway, handling these stories is tricky – maybe should note in tweets about early reports that we don’t have all the details yet, especially if ICE omits key helpful-to-ICE details when asked for comment. Trying my best over here; always regret spreading any misleading info.

When it fits the narrative of the day, in this case #AbolishICE, the media chooses to run without all the facts. All the better to stoke outrage and division and to feed the anti-Trump, anti-law and order #Resistance base.

If they hadn’t arrested the husband, the left would be criticizing the wife for not having an abortion instead of a c-section. Although maybe it would be a little uncomfortable for them to admit that those partial birth abortions are killing real babies.

That’s OK, they can all cheer up; they can run with the headline ACCUSED MURDERER GETS ANCHOR BABY.

Personally, I’m all in favor of US government cooperation with Mexican law enforcement, especially when it involves common goals, such as suppression of homicide.

About anchor babies
The parents must wait until the child becomes 21 before they can be sponsored. However, It can be a huge problem.
“These children may instantly qualify for welfare and other state and local benefit programs. Additionally with the passage of the 1965 Immigration and Nationality Act, the child may sponsor other family members for entry into the United States when he or she reaches the age of twenty-one (See also Chain Migration). The sheer numbers are staggering. In Stockton, California (2003), 70 percent of the 2,300 babies, born in San Joaquin General Hospital’s maternity ward were anchor babies.”
https://www.fairus.org/issue/societal-impact/birthright-citizenship

“Media beclowns itself by pouncing on emotions, not facts” could be a headline just about every day with the MSM. The news is more about appealing to emotions and trying to shape opinion than stating the facts and letting the listener judge for themselves. They will only present the details that support the conclusion they want you to draw.

It is probably time to stop using the term “beclowns”. That word does not carry the significant danger these people present to our nation and culture.

Yeah, “beclowns” just isn’t up to the efforts of the liberal media. I was thinking “beshats” as much more apropos… 😉

I generally applied a 48 hour “wait for the truth” rule when it comes to reporting of shootings. Seems luke it’s time to apply that rule to all news thanks to our Fake News Media.

I’ve detailed for years how media bias takes 2 main forms, omission & commission; what they don’t choose to report and what they do choose to report. However, for the previous 18 months I’ve noticed an extreme rise in a 3rd form of media bias; Fabulism – or by another name, outright bullshtt propaganda.

This example is definitely the 3rd form of bias.

Who is paying for the hospital?

And I’m betting the taxpayers won’t get as much as a “thanks” out of it.

Is she illegal, and will she now be drawing welfare? This is her 5th child with this guy. Is this a case of an illegal welfare queen?

This is exactly the kind of crap the root post is deploring.

Rags, your therapy day is Tuesdays.

Rags, I deplore these illegals conduct. I am not alone.

Ignoring the ad hominem bullshit above, have you a fact?

The root of this post was about publishing without facts…or ALL the facts. It is itself prone to criticism because it fails to publish ALLLLLL the facts (some of which in fairness are only to be known by further digging) regarding the allegation against the illegal daddy).

So, again, other than your psychotic fantasy, is anything you’ve said factual?

I don’t see why it matters whether the allegation against the daddy is true; all that matters is that the Mexican warrant exists.

Ragspierre is right. JusticeDelivered may be factually incorrect. This might not be her 5th child with this guy. These five children do not necessarily have the same father. That fact has not been established.

I took the time to dig through many articles and gather facts before posting. The woman stated that her husband is illegal and had been here 12 years and that THEY had five children. What I don’t know for sure is rather or not she is illegal and how much welfare they are drawing.

One of the left’s talking points is that illegals do not draw welfare, they ignore the fact that most anchor babies do receive welfare.

Given the huge number of Mexican illegal aliens living in the U.S., and the large number of them having babies in U.S. hospitals at the expense of U.S. taxpayers, it’s a fair question to ask.

And a question is not an assertion of fact, nor is it “psychopathic bullshit,” although it’s understandable that an actual psychopath might fail to discern the difference.

I read elsewhere that she too is an Illegal Alien. Both have been residing in the US long enough to have had five anchor babies. Whether the husband’s claim of mistaken identity is correct is to be determined by Mexican authorities, not ICE.

The quality of journalist has really declined in the last 20 years. I blame the racial identity politics on college campuses, producing a poor product.

“Officer, you can’t arrest me for robbing this bank because I’ll miss my son’s graduation tomorrow”

Do they really believe this drek they are pedaling?

Exactly. Only you left out the part that it would be kindergarten graduation.

What ’emotion?’ This is about any opportunity the democrat media to present propaganda.

The democrat/GOPe machine is a corrrupt Soviet mafia. Stalin would be impressed.

Right after my lastborn was born my wife was in the hospital and an acquaintance who moonlighted as a part time village policeman came into her room wanting to talk to her roommate. Who hadn’t yet given birth. Looking for her boyfriend, soon to be new father. He got to miss the birth and the first few weeks of his new baby being around. And he was just wanted for breaking and entering. (The night before while my wife was giving birth..) But he wasn’t an illegal immigrant, he was a local, so I guess it’s okay then…….

Here I am telling a perfectly good- and true- story about evil police separating a father to be from his loving partner- and someone downvotes it. Can you believe that?

I know a little bit about C-section deliveries, having had a front row seat to thousands of them. For an elective C-section, like this wonderful mother was scheduled for, the patient arrives to the hospital a few hours prior to surgery. Typically the partner drives as a courtesy, but there is no obstetrical reason for the mother not to.

I amused by what the media doesn’t say. They say absolutely nothing about him. His detention is important only insofar as it has an effect on a woman. I also love these hypocrites crying about “ripping a father away”, considering they have nothing to say about a family court system that routinely rips fathers away from their children and leaves them destitute.

Accurate storyline: Illegal Alien with a valid Arrest Warrant for a murder indictment in Mexico arrested by ICE while driving Illegal Alien wife to hospital for previously scheduled surgery. The wife drove herself to the hospital where she gave birth by C Section to the couple’s fifth anchor baby. The husband will be deported to Mexico to stand trial or clear his alleged mistaken identity.

Oh well, he’s only accused of murdering a Mexican.

“Wife had baby alone” – Huh? Illegal alien had baby in operating room thorough C-section, with full complement of doctors, nurses and other staff, all of whom were paid for by the public – meaning you and me!